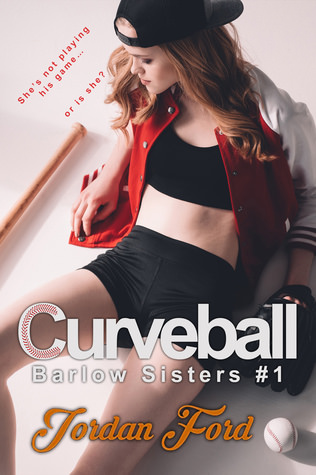 Blurb:
Maddie Barlow is used to being in control.
So when her father uproots their family to the small, troubled town of Armitage, just six months from her high school graduation, she’s struggling to cope. Worse yet, he insists the coach makes room for all of his daughters on the boys’ baseball team. The close-knit Armitage Pitbulls don’t want three girls messing up their season, and they’re going to do everything in their power to make sure the girls don’t make them look bad…especially Holden Carter—the smooth, good-looking captain of the team.

Maddie takes one look at him and knows he’s trouble. In spite of her instant attraction she’s determined to put the arrogant jock in his place, which is made doubly hard when her younger sister starts crushing on the guy. In an attempt to protect her sister from getting hurt, Maddie puts herself between them, only to face a curveball she never saw coming.

Her attraction to Holden is not supposed to turn into more…and when it does she’s caught between hurting her sister and turning her back on the first guy she’s ever really fallen for.
But a forbidden romance is not the only curveball Maddie and Holden have to dodge, because things aren’t what they seem in the quaint town of Armitage…and they’re about to work out that discovering the truth can be way more dangerous than living a lie.

I was so curious about this new series by Jordan Ford and quickly after I received my copy I started reading. I like the set-up for this trilogy with each book focusing one a different sister and after finishing this one I can only say I am even more curious about the other two sisters books. We got some glimpses of what they are up to here and I even have guesses about who they’ll end up with.

Curveball was a great start of this series. I liked getting to meet the sisters, this town and the school. Curveball follows the story of the Barlow Sisters who move to a new town. They have some trouble getting used to a new house and town. They love playing baseball and want to join the local baseball team, but that turns out to be a boys only team. They try and fit anyway and I liked how we get to see a bit about the sport as well. There’s also a bit of mystery surrounding school goods that get stolen, which was interesting too. I liked the twist at the end.

I have to admit that at first I had a bit of a hard time liking the two main characters of this book. I am glad to say that changed as the book progressed and I really enjoyed this book. Holden is the perfect guy, captain of the baseball team, good looks and popular. And as Maddie call him, he’s a bit of cardboard cutout. But it turns out there’s much more to Holden than meet the eye and I liked getting to know the real Holden and seeing him trust Maddie with the truth.

Madie was refreshingly honest and direct, but I also found her a bit too fiery at first. She easily jumps to conclusions about Holden, but it was great to see when she realizes she might’ve been wrong about him and falls even harder for him. I also liked how protective she is of Chloe and it’s obvious these sisters care about each other.

The romance starts off as a bit of a hate to love romance. Maddie can’t stand Holden and gets angry at him and he likes her fiery side. I didn’t really care for that part, but once Holden starts opening up to Maddie and shows her his trues elf, I was totally onboard with the romance. They made for a great couple, although I would’ve liked a bit more scenes between the two getting to know each other. I really liked the scene where they visit his grandfather. While there is little drama, there is this thing that keeps Holden and Maddie apart for a big part of the book. It felt a bit forced, but also in character. I am glad it didn’t drag on too long.

To summarize: Curveball was a fun start of this new series. It has a solid romance, three sisters, some teenage problems, sports and a bit of mystery. I wasn’t sure if I would like Maddie and Holden at first as Holden seemed a bit too perfect and Maddie a bit too fierce and she judged him a bit too harsh. But that all changes as the book progressed and it was great to see Maddie get to know the real Holden. I just would’ve liked to see a bit more scenes of them getting to know each other as now most of that happens on one evening. I didn’t really care for the thing that kept them apart, but it did feel in character and it didn’t drag on too long. I had fun reading this one and the glimpses we got of the two other girls have me really curious about their stories!