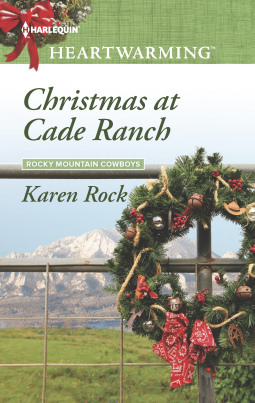 Blurb:
The Christmas they never had.

James Cade has one priority: keep the family ranch running smoothly in the wake of his younger brother’s death. With Jesse’s ex, Sofia Gallardo, and her young son, Javi, stranded at Cade Ranch over Christmas, this task just got a lot harder. The longer Sofia and Javi stay, the harder it is to imagine the ranch without them. James couldn’t save his brother from his inner demons, but he can give his nephew a secure future. Maybe more—if he can figure out how to trust Sofia, and stop feeling like he’s betraying Jesse. Because trying to stop thinking about beautiful, determined Sofia is impossible.

My Review:
I received a free copy of this book from the publisher through Netgalley and voluntarily reviewed it.

When I pick up a book by Karen Rock I know I am in for a good read. This book was no exception. It grabbed my attention with the first scene where we meet Sofia and her son Javi. It’s a heartwarming book set around Christmas. It deals with a bunch of topics like dealing with the dead of a loved one, trusting and believing in yourself, addiction and single parenthood to name a few. Karen wrote a compelling novel that deals with some tough issues and also has some beautiful uplifting parts.

From the first scene I felt for Sofia, she had been through a lot. She had a difficult time growing up with a father who didn’t support her or believe in her and she struggled with addiction and only got clean once she got her son. At the start of the book she meets the mother of her now dead ex and gets introduced to the rest of the Cade family. I liked how much she cared about her son. But my favorite part was probably seeing her change throughout this book and how she really grew into herself and found her way.

James is the main male character of this book. After the dead of his brother his family fell apart and the only way he can keep them together is with a strict schedule and control. I could relate to James at times and at other times wanted to shake some sense in him. He could be a bit too controlling at times, although it did came from a good place. he cared so much about others and did his best to make everyone happy he forgot about his own happiness at times. I liked seeing him warm up towards Sofia and Javi.

Besides the two main characters there is a rich cast of side characters, they were all easy to keep apart as Karen did a great job giving them all their own unique personality and I can’t wait to get to know them all better once the series progresses. We also got to see Jack and Dani from the prequel novel, which was fun. I also liked how realistic the author wrote Javi, Sofia’s son. He was so adorable and had that innocence of a child and that unique viewpoint only kids have. I liked how Karen captured his personality.

While this book is a romance novel, it’s also so much more. We see Sofia blossom under the love and care of the Cade family, find her way in life and start believing in herself. I also liked her relationship with Joy, James’s mother. We see how she still deals with the addiction and how she feels ashamed and still struggles with parts of her past. We see how she tries to be the best parent she can be to Javi and gives him all the love in the world. And then how nicely James fits into their family, but they both deal with guilt over Jessi and for a long time don’t allow themselves to be together. We see how James tries to be less controlling and go with the flow at times and grow to care for both Sofia and Javi.

It’s a very slow burn romance, which worked well for this book. There are a lot of other things going on as well. Karen weaves the multiple plot lines and side plot lines so neatly together and it all feels very natural. I did like the romance, there are some great scenes involving the two of them and I liked seeing them get to know each other better before it blossoms into more. It was very well done.

One thing I liked a bit less was the tad of drama toward the end, it just felt a bit off and I am not a fan of those type of scenes. The ending and resolution felt a tad rushed and I would’ve loved to see an epilogue as I like epilogues to wrap up a book like this. I also felt like some side plot lines didn’t get wrapped up as neatly, but as this will be a series I hope they will simply continue into the next book.

To summarize: Christmas at Cade Ranch is a heartwarming novel about love, family and believing in yourself. It deals with some tough topics. The author manages to weave all the plot lines neatly together into a compelling story. I really enjoyed the book and I loved getting to know the various characters. The main characters were great, they both had their share of struggles and it was great seeing them find each other. The side characters were great too and I am looking forward to reading all of the other Cade siblings their stories! The romance was well done, it was a slow building romance with the character getting to know each other better before it turned into more. I wasn’t a fan of the drama toward the end and the ending felt a bit rushed. All in all this was a great read and I am looking forward to the rest of this series.

What’s the last book you read with a cowboy main character?

18 responses to “Review: Christmas at Cade Ranch by Karen Rock”