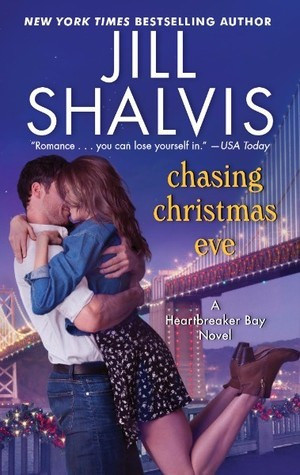 Run for the hills—temporarily. That’s Colbie Albright’s plan when she flees New York for San Francisco. Wrangling her crazy family by day and writing a bestselling YA fantasy series by night has taken its toll. In short, Colbie’s so over it that she’s under it. She’s also under the waters of a historic San Francisco fountain within an hour of arrival. Fortunately, the guy who fishes Colbie out has her looking forward to Christmas among strangers. But she’s pretty sure Spencer Baldwin won’t be a stranger for long.

Spence’s commitment to hiding from the Ghosts of Relationships Past means he doesn’t have to worry about the powerful—okay, crazy hot chemistry—he’s got with Colbie. Just because she can laugh at anything, especially herself… just because she’s gorgeous and a great listener just because she gets Spence immediately doesn’t mean he won’t be able to let Colbie go. Does it?

and hope for a miracle.

My Review:
I received a free copy of this book from the publisher through Edelweiss.

Chasing Christmas Eve is the fourth book in the Heartbreaker Bay series. I’ve been following this series since book 1 and I was excited to be back in San Francisco and follow this fun group of friends. This book follows Spence who is a bit of a workaholic and Colbie, who came to San Francisco for a vacation in hopes of breaking through her writer’s block. They run into each other when Colbie visits the famous fountain.

I can always count on Shalvis to deliver a great romance and Chasing Christmas Eve was no different. It’s well written, the pace flows well and by the end I really wanted the happy ending for Colbie and Spence. There also was a small side plot line of a list of things she wanted to do while visiting and Spence helped her see the places on her list and added one too. It was interesting to have a character from another place visit here and fall in love this place. And it meant we got to see a bit more of this city and see it al from another point of view.

The romance is well done and I liked reading about these two, although I wish they had talked a bit more. They have some great chemistry and there are a bunch of sex scenes in this book, but I had wanted to see even more of them together outside of the sexy times and really feel their connection and how they understand each other. There are a few great scenes that do illustrate that, like at the end when they gift each other a very thoughtful gift and I guess I wanted more of that. There is a fun date we get to read about, but most of their dates we only hear about instead of getting to read them. They also have a tad of miscommunication going on, because they don’t actually talk about what they feel that often.

Even though I did really enjoy this book, there were a lot of those small things that diminished my enjoyment a bit. All of these are small things, but they did add up in the end. Spence is described as a workaholic and we get told every time again that this is going to be a problem, while in fact it isn’t. I wouldn’t have minded seeing him struggle a bit to balance his workaholic tendencies and love, I thought it would make for an interesting and real conflict. But the real conflict is one I saw coming from the start of the book, they only have three weeks together and what happens when those weeks are over?

Then there is Spence, who actually seemed pretty normal, I kinda had expected him to be more quirky somehow? Oh and just like all the other guys in this series he has this perfect body and is muscled, but I found a bit hard to believe that with his workaholic tendencies and how he ate junk food and candy most of the time he apparently still looked like a supermodel. I know I sound nit-picky now, but it just felt unrealistic, especially as he never works out over the course of the book or at least not that we read about. The progression of the romance and the conflict was also a tad too similar to previous books in the series. I would’ve liked something more different.

But despite my issues with the book it is a great read. I liked seeing Spence and Colbie fall in love. They weren’t looking for love, but love found them. I also liked how Colbie finally learned to live for herself and find happiness instead of only caring for everyone else. There’s also some interesting backstory we find out about Spence and his family and a fun twist I hadn’t expected.

We also get to see most of the main characters from previous books again and it has this small town feel, which I like. And I realized I actually like Elle a whole lot more as a side character than a main character, she’s harsh at times, but honest, which I liked. She’s also very protective of Spence, which was fun to see. And ofcourse Pru and Willa we see again and Haley and Kellie who hopefully both get their own books as well.

To summarize: Chasing Christmas Eve was a fun read! If you’re looking for a great romance series set around a close group of friends who live in the same building that has a bit of a small town feel, this series is perfect for that. The book is well written and I easily read through it. But despite really enjoying it, there were these small things that didn’t fully work for me that added up in the end. I would’ve liked to see them talk a bit more and have more scenes where I really felt how great they fit together and not just in bed. I had expected Spence to be a bit more quirky and I thought the workaholic thing would make a great conflict, but it was never really a problem. The romance progression and conflict was a tad too similar to the previous books. I liked how Colbie came here from another city as it was fun to see someone from another city discover this city and fit in with this group of friends. All in all it’s a great heartwarming romance with a bunch of hit scenes mixed in. I like how it’s centered about this close group of friends and we get to see all of them in each book. It was nicely wrapped up and it left me feeling happy and curious about the next book.

Do you like series about a close group of friends?