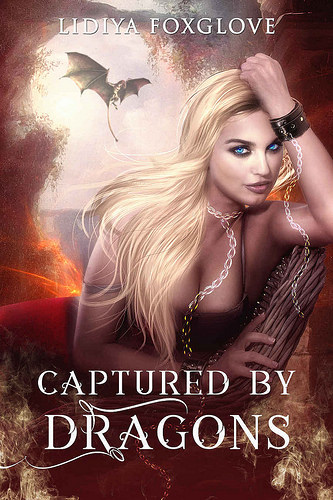 Blurb:
“Is it so bad to belong to us? This is what you’re in for, every day of your life. Your pleasure feeds us and we want nothing more than to give you as much of it as possible.”

Since Dakota was a little girl, she wanted to believe in magic, pretending to be a queen of witches even after most girls were starting to date. After her friend Edie falls in love with three sexy demons, the real world gets a little harder for Dakota to endure. How can Dakota get some magic in her own life?

What she didn’t mean to do? Accidentally cast a very real, very binding spell promising herself to the first demons who can get their hands on her. After a narrow escape from a shadow demon, Dakota is rescued…but also, kinda kidnapped…by three powerful demons from the Sinistral Realm who can shift into huge dragons. Loyal warrior Hiron, barbarian sorcerer Xado, and Rafe, a musician carrying an old grudge: by the laws of the Demon Symposium, they’ve been waiting for a human mate for fifty years, and they’re not about to wait a day longer for the highly pleasurable ritual that allows dragons to mate with a fragile human. If Dakota tries to escape her sexy captors, she’ll only be snatched up by the shadow demons again.

Captured by Dragons is a steamy paranormal reverse harem romance with a purely happily ever after ending. All the books in the Brides of the Sinistral Realms series have continuing characters but can also be read standalone.

Captured by Dragons was a fun read. I like the way Lidiya Foxglove writes her books, they flow well and I want to keep reading. But for some reason this story didn’t capture my attention as much I had hoped. If you want a steamy standalone reverse harem read I would recommend it.

Captured by Dragons follows the story of Dakota. Dakota always meanders through a life a bit and now that Edie, one of her best friends settles down with 3 demon husbands, she realizes that she wants that too. Then her mother who she heavily relies on falls ill and on impulse she wishes for demon husbands. What she doesn’t realize is that she actually cast a spell. And now all kinds of demons are after her. A dragon demon saves her from another type of demon and takes her home to his castle to become their bride.

The start of the book gets right into the main part of the story, it started a bit sudden, but it did get rolling quite quickly. Then after that there is a flashback to a bit earlier which actually explains better what is behind this all and I wished the story would’ve started there as it seemed to make more sense to me. But once I was past the first few chapters the book flowed really well and I got easily pulled into the story.

While this book can definitely be read as a standalone, I think it’s a bit more fun if you read book 1 first as there you get introduced to Edie, Dakota and Nicole already and all 3 have a part in this book as well. Even tough this book is still pretty much Dakota’s story, there’s also an appearance of Edie and her husbands and it feels like Nicole’s story gets set up here.

With the way these stories are set up I was wondering if this book wouldn’t be too similar to book 1, but the set-up was actually very different. Where Edie gets courted by three elemental demons, Dakota gets basically captured by these dragon demons. The dragon demons are quite different as well and even the sex scenes had a twist related to them being dragons. The dragons also live longer and they live in the Sinistral realms, while the demons from Edie live in a sort of in-between island. I really liked how the author made both stories unique even tough they have common aspects.

I liked Dakota as main character. She is a bit carefree, meandering through life and she actually doesn’t really know what she wants to do. She always believed in magic, but there is no magic on this place. She always fantasized about having multiple men, but now Edie has them and she is a bit jealous of that. And when she puts her wish to the universe and actually gets what she wanted she does have a moment where she isn’t sure she actually wants this. She worries about her mother and is a bit unsure about herself. But she slowly finds her way and confidence throughout this book which was fun to see.

I didn’t really care about the set-up for the romance tough. One of the men basically rescues her from another demon and decides she is theirs. Within an hour or two of him capturing her, she is on their couch getting pleasured and it all just moved at a bit of a weird pace? Things progressed really quickly and sudden and there was little build up or getting to know each other. On the other hand I liked that the set-up was very different from book 1, and at the same time I actually liked the set-up of book 1 better.

With the way the romance developed I also had a bit of trouble really feeling the romance. The dragons needed a mate and Dakota accidentally made a spell that made her a bride for demons, so that was a good coincidence. But this did remove their actual choosing out of the equation. It also bothered me a bit the dragons didn’t try and break the spell Dakota cast as it worked good for them. While it was interesting that they were actually dragon demons and not always nice and this did feel true to their nature, at the same time I would’ve liked seeing them go that far for her. It quickly becomes clear they would care for her well and later in the book there is a great scene where Dakota clearly chooses them, which was great. I just didn’t really feel their initial spark and connection.

I also struggled a bit getting a good feel for each of the men, they are all handsome and horny and dragons. Once we got a few more details from the men I was able to remember who was who, but they never really came as alive as I wanted. And the references to movie stars for their descriptions didn’t really help either. And one of them kept having black hair in my imagination, while he is blond. I also wished there were a few more scenes with Dakota and the men individually to show their different bond with them. And a bit more scenes with them together that didn’t involve sex. I did like the scene at the end where it’s clear the men also are happy with each other and their bride.

Which bring me to the next point. This is a pretty steamy read. Which I am okay with, but for some reason I didn’t really care for the steamy parts. Maybe I just picked this up in the wrong mood. I also thought they were a bit too horny sometimes. A lot of their together scenes involve sex, talk of sex or thinking of sex and even when they have this trip with Dakota and her mother the only thing they can think of is sex with Dakota. I just wanted a bit more besides that and also see some of the tender moments.

I also got a bit annoyed that Nicole kept wanting to save Dakota even after it seemed clear Dakota didn’t need saving. On the other hand it was fun to see the start of Nicole’s romance a bit already in this one. I also was happy when Dakota later on in the book made it clear she was happy with the way things turned out and she choose this life.

This book does add a lot of world building to this series. I liked how this book took place of the most part in the Sinistral realms. We get to know a lot more about the different types of demons that live there, a bit about how things work in the Sinistral realms, the type of law, council they have there and more. And ofcourse we get to see a lot about the dragons too. I really liked learning more about the demons plane.

To summarize: Captured by Dragons was a fun and steamy read. I liked how different this book was from book 1, even tough they have similar themes. While this can easily be read as a standalone, I think it’s most fun to read the series in order. I liked Dakota, she wasn’t sure what she wanted out of life and finds her way in this book. She dreamed of magic, love and good sex and she gets all of that, even tough it’s in a way she hadn’t expected. I didn’t really care for the set-up for the romance and didn’t feel the romance at first. I also had some trouble remembering who was who of the guys at first, but after a few chapters it got easier. I also would’ve liked to learn more about their individual personalities. There was a bit too much focus on sex at times and I would’ve liked to see a bit more sweet/ tender scene as well. I liked how we learned more about the Sinistral realms in this book, it was very interesting to see how things worked there and what kind of creatures lived there.

What’s the last book you read with dragons or dragon shifters?

6 responses to “Review: Captured by Dragons by Lidiya Foxglove”