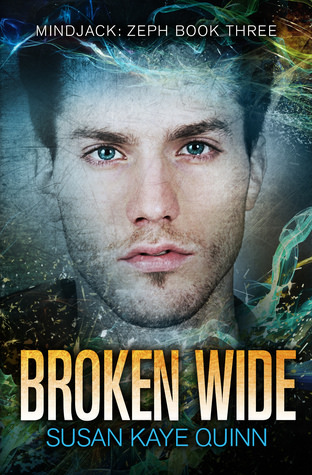 Blurb:
All he wanted was peace; all he had was hope.

Zeph had spent half his life hiding what he was—keeping his mindjack powers away from dangerous men and running away from everyone he loved to keep them safe. Now that his life is finally coming together—his mom and sister are safe; the girl he loves in his arms—the world is falling apart. The mindreader backlash against jackers is growing daily. Jacker-bigot politicians are stoking fear and gaining power. And jackers on the Fronter’s Purity list are winding up dead on the streets outside Jackertown.

Even the Jacker Freedom Alliance is tearing itself apart.

All Zeph wants is a chance to build a life with Tessa—but even she is losing faith. If there’s no peace between jackers and readers, what future could they have? Then a protest goes terribly wrong, the president starts talk of a Jackertown siege, and a MINDWARE CEO races to develop a dangerous mind-blasting technology. It seems foolish to even hope for peace, but one thing becomes very clear—the only way to put the world back together is to bring down the powerful people breaking it apart.

The conclusion to the bestselling Mindjack: Zeph series, where daring to hope for peace could be the most radical—and dangerous—move of all.

My Review:
I received a free copy from the author and voluntarily review it.

Broken Wide is the third and last book of Zeph’s story in the Mindjack universe. I always enjoy this author’s work so I was excited to dive into the story. Unfortunately I’ve been in this weird reading mood and I felt like it wasn’t quite what I was in the mood for to read and the book fell a bit flat for me. Although I do think it’s still a solid read and a great ending to this series, it mostly was my mood that made me enjoy it less, instead of the book itself.

In Broken Wide things go from bad to worse. The jacker hate is going strong and there is a new president who is all about preserving the mindreader way of life and controlling or subduing the mindjackers. This book continues the story of Zeph in much of the same style as the previous books. We have jackertown and the JFA movement, Zeph’s undercover job at Julliette and how he’s forced to work for DARPA again. At the one hand it felt a bit like more of the same, but every part was important for bring things to the final conclusion.

It did get a bit political at times, which I didn’t fully care for. It also get a bit dark at times, with some pretty gruesome and violent things happening to Jackers. It just felt a bit much or maybe I just have a hard time believing people would be that cruel. I also would’ve liked to see a bit more of how the JFA fought back with words and speeches to the jacker hate, but as Zeph isn’t present there at the time we see little of that sadly. The change at the end felt a bit abrupt and I wouldn’t minded a bit more slow build up/ move to change.

There also are a few plot twists that change things up a bit. One of the plot twists reminded me a bit about a twist in one of this author’s other series. And the second big plot twist somehow lacked a bit of impact as with what we already knew what was happening now. I also felt like Zeph was a bit of a special snowflake at times as he gets a few extra abilities again in this book, although it does now sort of make sense why he can do all of those things, so it was nice there was a reason for it.

I do like how we see Zeph change over the course of the series, while he still stays the same person as well. He is now fully committed to making peace for jackers and readers. But his family and girlfriend still come first. And he’s put in some difficult situations again like in the previous books were he has to do things he doesn’t want to and just hopes he can fix things later.

I also liked the last chapter when we get that glimpse of the future and how things are going now. And while it might be a little bit too perfect, I like my epilogues a bit on the too perfect and happy side, so that totally worked for me. And it’s just so nice to see how they are carving out their lives now that things are settled.

To summarize: Broken Wide is a solid ending to this trilogy. My weird reading mood prevented me from enjoying this one as much as I would’ve liked. I had a few small issues with things, like how it could get a bit political and gruesome/ violent at times, but mostly I think this was a great way to end the series. I would’ve liked to see a bit more gradual change and what they were doing to change things before the big scene at the end. The big plot lines are wrapped up and the last chapter acts an epilogue, which I really liked as it was nice to see how they are living their lives now that the threat is gone. It was nice to see how Zeph changed throughout the course of this trilogy, but also how he is still the same guy as in the first book on same parts as well. If you enjoyed the first two books in this series you probably will enjoy this one as well.