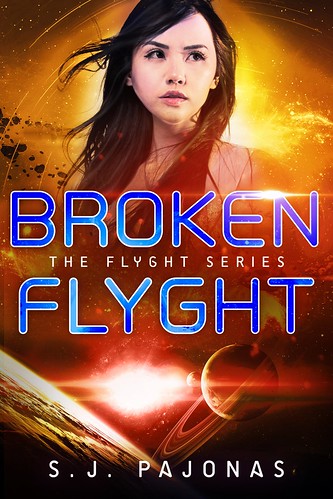 Blurb:
Fallen heiress, ship’s captain, entrepreneur — Vivian will do whatever it takes to restore her family’s empire, even if it means sacrificing her own happiness…

With her ship secure and her old boyfriend back in good graces, Vivian Kawabata only needs one thing to move forward: money. Money, though, is hard to come by when you’re an infamous disgraced heiress. Vivian’s only move is to enlist the help of her matchmaker, Marcelo, and find another wealthy man to add to her relationship network. He not only has to be a master in the bedroom, but he must be a pro with ships, too. Her ship needs a mechanic before they start taking on real clients for Flyght, the lucrative ship-sharing startup.

On their way to Rio to follow the trail of Vivian’s deceitful brother, Marcelo presents Vivian with two eligible bachelors, Sean and Jinzo. The vetting process is rocky from the start; Sean is stand-offish and distant, and Jinzo doesn’t make a good first impression. Despite this setback, Vivian is determined to make something work because if she’s doesn’t, she’s dead in the water.

After their first romantic escape, Vivian is knocked backwards by her feelings for Jinzo (first impressions aren’t everything). But he’s not as eligible as he first seemed to be, and the realization throws her whole world into chaos and a new possible scandal. Every decision Vivian makes puts not only her own future on the line, but that of her crew and her family. Will she play it safe, or risk everything – including her heart?

Broken Flyght is the second book in the Flyght Series of sci-fi reverse harem romance. If you like action-packed space operas and a universe full of twists, then you’ll love S. J. Pajonas’s interstellar adventure.

I received a free copy of this book from the author and voluntarily reviewed this one.

I really enjoyed First Flyght, the first book in this series and when this one arrived I finished my current read and then dived straight into this one. Broken Flyght was an awesome sequel and I enjoyed it even more than book 1. Now that the stage is set in book 1, this book shows us more of what Vivian is up against, the race to find her brother, the struggle to find suitable consorts, then she has to keep her ship in the air and get a lot of money to get her farm back. Luckily she now has a flyght contract and can ship passengers and goods. This book ups the stakes on everything and it was an amazing read. There are some great twists and turns too and I loved seeing how things developed.

Vivian has a lot to deal with in this book and on top of it all she’s also sleeping badly and is dealing with nightmares. I always like these little touches of realism that Pajonas adds to her books. Although at times I just wish I could make sure Vivian got a good night of sleep as she was ragged and I was afraid she would make bad decisions because of it. There were a few times I really wanted to warn her against doing things, but in the end most things turn out okay.

And the romance was awesome in this book. One of my small complaints of book 1 was how low on the romance it was and I wasn’t fully sold on Ken and Vivian’s romance, I figured this book would change my opinion on that. Strangely enough Ken hardly was in this book and while that might sound weird, it totally worked here and made sense given his job and Vivian’s job and how they went in different directions.

So instead of more time with Ken, Vivian meets two new possible candidates for her relationship network in this book. Sean seemed a bit off from the start, but in the end I actually really liked how that plot line got resolved. It sure went in a direction I hadn’t expected. Jinzo immediately captured my attention, he was perfect for Vivian and so sweet and caring. I wanted to tell Vivian to not be so paranoid and give him a chance, but ofcourse it makes sense for her to be a bit wary at first. I loved seeing how they grew closer. And even tough Vivian wants to keep her distance, she quickly falls for him. There are some great scenes where Jinzo really show his devotion to her. I loved these two together.

So as far as the reverse harem aspect goes, that’s off to a great start now. Although we mostly have seen her with only Ken in book 1 and that relationship only progressed a bit toward the end and in this book we see her relationship with Jinzo develop. Now I am curious to see how things will go when all 3 are together in the next book and how Vivian will juggle having multiple guys around. And I can’t help but be curious if she will add more men to her relationship network.

It was great to see more of the world and also the cultures. Like how we meet other women with their husbands and how normal that was in this world. And now that Vivian is expanding her network, you get to see some of the politics and social niceties that are involved, like how you don’t steal someone else their guys and also how these relationships work a bit as contracts, but while that makes it sound dry, I also felt like there were lots of feelings involved. It was interesting to read about and I like how the author incorporated the whole reverse harem thing in the world as it made a lot of sense this way.

I also like how Pajonas adds some interesting touches to this sci-fi universe, first we have these two systems with their own planets and lots of travel between them, which makes for an interesting dynamic. It had a bit of that Killjoys vibe, but then with less action, although there is some of that as well. I like the more small scale, how there are different planets, but not a lot. Then there are things like the seeds, that I hope we hear more about in book 3. And the sea monsters! I loved the sea monsters. Most of these worlds seem pretty normal, but then those touches like the cities and the jungle and the sea monsters really add some flavor to these worlds.

I have to admit that at times I have trouble keeping track of which planet is in which system, where certain things are located and where other people are and where they are going. I would love to have a map of sorts with the two systems and the planets and the big cities just to keep everything straight. I am pretty bad with names and terms at times and have trouble remembering them. At least I managed to remember her home town city and recognize when they talk about that.

I also liked how we got to hear more about Vivian’s love for her farm in this book. It really makes it clear why she’s working so hard to get the farm back and how much she loves the land. I feel like we get to learn more about Vivian in this book and seeing how she interacts with everyone shows more about her personality.

This series is also full of great characters. I’ve grown really fond of Marcelo, Vivian’s relationship broker. Ai, the ship’s AI is still one of my favorite characters too. I like her personality and it also was fun to see how she communicated with Vivian when Vivian was away from the ship. Speaking of the ship, that slowly is becoming their home and I like the vibe of the ship as home base, but also seeing them spend time in other places. I love Jinzo, he’s so sweet and awesome. It also is fun to see more of Carlos, Skylar and Lia in this book.

To summarize: I love this new series by S.J. Pajonas! It was romance, a great plot line with some twists, some well done world building and a fantastic cast of characters. I’ve already grown quite fond of this world and characters and this sequel was really good. In this book we don’t see as much of Ken, but instead the romance focuses on Vivian’s developing relationship with Jinzo. I loved Jinzo, he’s a great character, so sweet and helpful and he’s perfect for Vivian. It’s a solid basis for the reverse harem aspect and I am looking forward to see how things go in book 3 when the two guys meet. I also liked learning more about the world and the characters in this book. I really like the world the author has build, even tough I have trouble remembering sometimes what is where and the names of everything. The side characters are great to read about too, this book really has a lively and interesting group of side characters. All in all an amazing read and I can’t wait to get my hands on the next book.