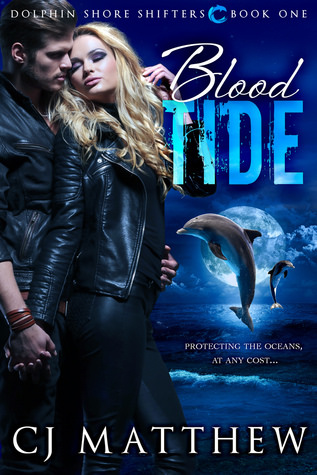 She had more than just her mission…
Sy’s rotation on land as a dolphin shifter couldn’t have come at a better time. With her best friend missing and no answers forthcoming, it was time to take matters into her own hands. And with the resources at the Save Blue Water organization, finding her friend would be a whole lot easier. Except …something sinister is going on inside SBW, something deadly, and Sy finds herself at the center of danger.

The last thing he needed was bullets and bombs…
Noah Nelson spent every minute trying to forget the war while fighting his PTSD, but jumping in front of a bullet was second nature. It had nothing to do with the fact the target was the most beautiful woman he’d ever seen. Or that she was naked. But suddenly he’s caught up in her world, protecting her from unforeseen threats, and falling in love … but Sy’s got a secret that may rip them apart. Forever.

When I received the review request for Blood Tide it didn’t take me long to decide I had to read this book. The word dolphin shifters grabbed my attention immediately. I like reading about shifters and to read about a shifter type I haven’t read about before is always a good thing in my opinion. While there isn’t as much focus on the dolphin shifters as I hoped, Blood Tide does have a lot to offer. A nice couple as main characters, a bit of a mystery, some suspense and a bit of the paranormal thrown in. However there were also parts that didn’t flow quite well, where I wanted more explanation or things just didn’t quite make sense, some extra background that seemed to be missing, conflicts that’s build up and then suddenly falls away and plot lines that don’t get tied up as neatly as I would like. Lots of minor issues that heaped up. Which ended up making Blood Tide an enjoyable read, but I wasn’t completely wowed or invested in the story.

Blood Tide follows dolphin Shifter Sy, she comes to land to investigate the disappearance for her sister dolphin Lorelei and to join the shifters who work at the organization SWB. I liked Sy, she was cautious, but also knew when to take risks. She was a bit paranoid at times and follows her heart and intuition. There are a few scenes were her behavior seemed a bit off, for example after the shooting she doesn’t trust anyone in SWB, while those are her friends and family and dolphins are trusting by nature. Or when there’s lots of focus on how having sex with a human could mean her death or banishment, but after knowing Noah for only a few days she throws caution out of the window and jumps into bed. Beside that I did like her as a character, she was smart and resourceful and knew when she could use help, although she also could be a bit stubborn at times and preferred to rely on herself alone.

The there is Noah the love interest, who’s point of view we also get in some chapters. He rescues Sy multiple times and they are instantly attracted to each other. Noah is a very protective character, sometimes a bit too much, but he had his heart on the right place. One thing that bothered me a bit was how his PTSD could be downplayed or given a lot of attention depending on the scene, although overall I thought it was handled well I just thought he was doing better with it than all the characters in the book thought. The side characters are fun, but we never get to know them that well. Then there is one other point of view of an undercover agent and I just wondered why it was added as it didn’t add as much to the overall story and he didn’t tie into the plot that well. Although we do get the early hint of who’s the shooter form his point of view.

The romance is fast developing and starts out with insta-lust which then builds into love. I liked these two together, although also could be frustrating at times, pushing each other away instead of communicating and then jumping in bed again the next time they meet. There were some serious issues of miscommunication or they jumped into bed and never got to the talked part. I did like how they trusted each other and tried to solve the suspense/ mystery together. There are quite some sex scenes, so this book is definitely a bit on the hot side. Sy and Noah have some hot sex and those are the scene were they seem most in tune with each other. They do spend some time together, but when they pulled out the I love you’s I still thought it was a bit quick, then again knowing that each book features a different couple I did expect the romance to wrap up in one book. I just wished they talked a bit more and spend time getting to know each others mind as well as each other their bodies. There is some conflict in their romance, multiple points actually, one of them got solved pretty okay, but the other point was just a bit too fast and a tad unbelievable. I assumed it would be a big thing, but in the end it got solved very easily.

The world building lacks a bit in my opinion, it stays vague at most points and doesn’t give us the full feel of what it’s like being a dolphin shifter. The only shifter scenes are at the start, when she shifts to human and at the end told form another point of view. It’s more a story about an organization with a secret. We do get a feel of how they run their organization, but I wanted more details. I also could easily forget that Sy was a dolphin in the first place. These are dolphins first and humans second and they seamless blend in human society. With the exception of some hobbly legs in the beginning cheek touches instead of hugs and one scene towards the end these characters didn’t feel like dolphins. Basically if you removed the dolphins most of this book would stay the shame and I think that’s a shame. There are also some rules which are a problem one moment and then overthrown in the next and I just had hoped for more focus on the shifter aspect and what is means to be a dolphin shifter.

To conclude: Blood Tide is a fun start to a new series, it has action, suspense, a tad of mystery, romance, hot sex and some dolphin shifters. I did have a lot of minor issues with the plot, some scenes that felt a bit off, the flow of the story was a bit weird, things that got resolved too easily or plot points that didn’t get tied up neatly. Mostly I did enjoy it and the blend of suspense and romance was done pretty neat. Although there is a case of insta-lust and they definitely get to know each other their bodies more than any other aspect. I did think the whole dolphin shifter aspect fell a bit flat, there are two very short shifting scenes were we don’t really get the experience of life as a dolphin and most dolphin shifters just seemed so normal and human. I would’ve liked seeing a bit more of the dolphins, but I would be interested to see how the series continues.

Have you ever read a book about dolphin shifters? What’s the weirdest shifter type you read about?