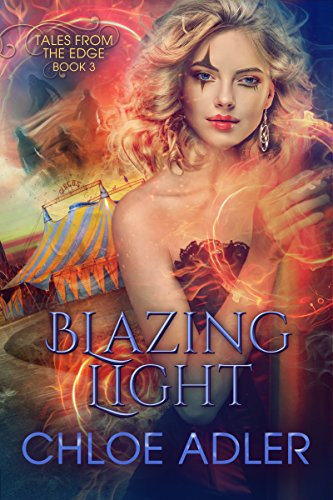 Blazing Light (Tales from the Edge #3)
by Chloe Adler

Blurb:
Acrobat, witch, and beloved of four men, Iphigenia Holt finds an unconventional happily every after in her third and final book.

Iphi has always lived for others: her mother, the world’s most powerful and temperamental witch; the town of Distant Edge, plagued with a rash of ghoul attacks only she can stop; and all the creatures, human and otherwise, who have strayed across her path since childhood. But when she’s sucked into a desolate land far from home, a land filled with angry pixies, endless darkness, and an evil that has stalked her family for years, she’ll have to put her needs first for once.

And what she needs is her men.

But first, she’ll have to save them. With Thorn still stuck in his dragon form and now the plaything of pixies, she won’t stop until he’s free, even if it means burning an alien world to the ground. Stuck on Earth, Rhys, Caspian, and Dominic won’t stop until they hold their woman in their arms again. Though she’ll have some explaining to do when they discover they’ll have to open their hearts to yet another male, even if he is their packmate and brother.

But Iphi’s done hiding her light—and her love—from the world. Why should she have to choose when she deserves them all? #whychoose

I was curious to see how the author would wrap up this series. Blazing Light is the third and last book in this series and I thought it was a great ending. Sadly I was in this weird reading mood and I had trouble getting into this story. While I did enjoy it, I wasn’t able to fully get into the story. But overall it is a great read. It nicely wraps up the main plot lines and also brings the romance to a satisfying conclusion.

Blazing Light starts after where the cliffhanger left off at the end of book 2. This book has a lot more focus on the ghoul/ puppet master/ scrim storyline than the previous books. I never really cared for the plot line, but now that the focus shifted to it, it all made a lot more sense and progressed a lot faster. I actually did really like the reveal and twist in this storyline as it took a direction I hadn’t expected at all and it did make sense.

There were a few parts where the pace felt a bit off as the characters were split and some parts were more interesting than others. And then some of the characters would progress more and at times it felt like the other characters didn’t make as much progress and then that changed around a bit again. The multiple pov’s were great for keeping a feel for what everyone was up to, although it switched pov’s a bit too often at times.

One thing that didn’t quite work for me in this book was the romance. Could just be my current mood partly or the fact that with the focus on the main storyline there seemed to be less focus on the romance. There are some sexy times at the start of the book, then the romance is a bit on pause till the later part of the book where things progress a bit with the last harem member and then some sexy times at the end of the book again. There just didn’t seem to be as much focus on the dynamic or their relationships or any drama like in the previous books. And most of the scenes they had now were sexy only and I would’ve liked a bit more sweet and touching scenes as well.

One of the issues I had with this book is a scene later in the book where Iphi connect with her fourth harem member. The problem for me is that it kinda felt like cheating. For the reader it’s obvious who the fourth member will be, but in character they never discussed this and if it was okay for her to sleep with anyone besides her 3 boyfriends. And with how the third member was added to the harem in book 2 with good communication and some struggles too, this felt very different and I didn’t like it. To me it felt that Iphi betrayed her 3 boyfriends their trust by sleeping with another men without discussing it with them first. I had expected it might be the set-up for some drama later on, but the reaction of the other males quite frankly surprised me and made me feel even more weirded out by the whole thing. It just felt unrealistic they would act like that, especially after how it went in book 2. It just felt like they took this too easy.

I also had some trouble keeping the point of views straight as the character sound very similar and the males have some parts of their personalities that are similar too. I also rolled my eyes at the overly alpha, impulsive and overprotective behavior of the males a few times as I didn’t really care for that. I did like how clearly they all care about Iphi. And the multiple point of views were a good way to keep track of what everyone was doing.

I felt like this book added quite a lot of understanding of the world. It really expands on the world building. We learn about a different dimension and how things are there. And some characters background are worked out a bit as well. I hadn’t expected so much time to take place in the other realms and at first I didn’t quite care for it, but in the end I did like it and I realized how relevant it all was.

To summarize: this was a great ending to the series. the focus in this book shifts more to the story and less to the romance. I actually liked the whole ghoul plot line much more now that it got explored more and progressed. There were some nice twists and reveals and I liked how the storyline got resolved. The romance didn’t quite work for me in this book, probably because of my reading mood and with how it got less attention in this book. There is less drama and relationship dynamics and most of the romance times are sexy times. I struggled a bit with how the fourth member of her harem was added as it felt to me that she cheated on her 3 boyfriends by sleeping with another without discussing it with them first. Everyone seemed to make light of it in the book, but to me it didn’t feel right. I liked how this books adds to the world building. There’s a new realm we learn about and it was interesting to read a bit about how things worked there. All in all it wrapped things up well and was a great ending to the series.