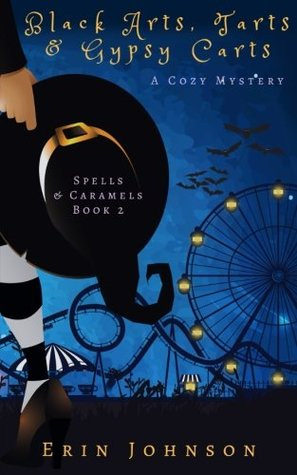 Blurb:
With the Summer Sea Carnival visiting the enchanted island of Bijou Mer, Imogen jumps at the chance to help run the royal bakery booth. It’ll get her out of the palace and allow her to continue avoiding her feelings for a certain engaged prince.

Imogen’s plans to lay low are shattered when the world-famous necromancer, Madame Zerna, is found dead, sawed in half on the dark magician’s table and Imogen’s friend Rhonda is caught red-handed. With incriminating evidence piling up against Rhonda, Zerna’s rival, Imogen promises to help clear her name by finding the real murderer.

But between running the booth, encouraging Maple as she struggles to lead as head baker, and taking spell lessons from the friendly strong man, Imogen’s got her hands full. And it’s no easier getting information from the evasive dark magician or Madame Zerna’s secretive assistant. Even Rhonda’s hiding something.

With the Night of the Dead fast approaching, and Rhonda headed for a maximum security witch prison, Imogen races to unearth the real killer in time to save her friend. But in a mysterious carnival where nothing’s as it seems, will Imogen have the magical powers to keep from being on the chopping block herself?

My Review:
After reading book 1 I couldn’t wait to return to this fun and magical series and a few days later I started book 2. Black Arts, Tarts & Gypsy Carts is just as fun as book 1, I flew through this book and enjoyed every page of it. It’s such a fun series, filled with magic and mystery, great characters and a hint of romance.

This book nicely combines both the paranormal and mystery elements into an engaging story. I like how the mystery is a bit different from most cozy mysteries. Yes someone dies and the main character searches for the culprit, but it’s all just a bit different. Which is great! And the paranormal touches, magic and fun setting really add something to the series.

I liked the mystery aspect of this book, I had figured some things were going on or something wasn’t quite right with something, but not predict fully what exactly. I did predict a few things, but not all the details and it was still great to see things come to light and the reasons behind things. I wasn’t sure why the murderer was and was surprised when that came to light, but it did make sense. The pacing is also a bit different than normal cozy mysteries, the murder isn’t directly at the start and after the murder gets solved there are a few more chapters to wrap things up.

And there is a lot of magic and paranormal things involved everywhere, it’s woven so nicely into the story it’s completely part of it. I liked reading about Imogen learning to control her magic a bit more, we learn more about the magical world and there’s a carnival! And maple is now the royal baker and there are some great side plot lines involving her and the other side characters. Iggy is still one of my favorite characters and there were some great scenes involving him.

It was a joy to read this book. I can’t say it enough, but this book is so much fun to read. And while it touches upon some issues like murder and some others it keeps having this light tone. I like how it has both a paranormal feel and a strong focus on the mystery as well. And the whole city and the carnival in this book were fun to read about.

There isn’t much progressing with the romance in this book. Imogen meets another male she becomes close with, but I am glad it never felt like it was going in the direction of a love triangle, which was nice. She really only wants to be friends with Edward. However I still didn’t like Edward. I did like the few scenes with hank, but I just wished we got to see more of Imogen and Hank together.

To summarize: This book was just as much fun as book 1. I flew through the book and wanted to keep reading. The blend of paranormal and mystery is so well done and really works here. The mystery was a good one, I had predicted a few things, but not all the details and it was great to see everything play out and come to light. I like how the pacing and events of the book don’t follow the typical progressing of a cozy mystery, the slightly different pace really works. The characters are great to read about and I liked seeing more of Maple, Iggy and some new characters. There are some fun plot lines involving the bakery and the carnival. I didn’t really like Edward, but I was glad it never felt like it was turning into a love triangle. There isn’t much romance in this book and I hope we get more of Hank and Imogen together in next book. I am looking forward to starting book 3 soon!

What’s the last book 2 in a series that you read and did it live up to book 1?