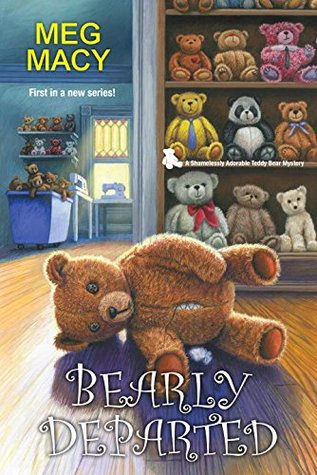 Blurb:
The Silver Bear Shop and Factory might be the cutest place around, but there’s nothing warm and fuzzy about murder . . .

As manager of the family teddy bear shop and factory, thirty-one-year-old Sasha Silverman leads a charmed life. Well, except for the part about being a single divorcee with a ticking biological clock in small-town Silver Hollow. And that’s just kid’s stuff compared to Will Taylor, the sales rep who’s set on making drastic changes to the business her parents built from scratch–with or without Sasha’s approval . . .

But before Will digs his claws in, someone pulls the stuffing out of his plan . . . and leaves his dead body inside the factory. Reeling from shock, Sasha’s hit with more bad news–police suspect her hot-tempered Uncle Ross may have murdered him. Sasha knows her uncle would never do such a thing, and she’s launching her own little investigation to expose the truth. As she tracks Will’s biggest rivals and enemies for clues, Sasha can’t get too comfy–or she’ll become the next plaything for a killer . . .

One thing that I love about cozy mysteries is how they all seem to have a theme, hobby or job they focus on. And one way to get me curious about a new cozie series is when that book has a theme I hadn’t read about yet. So this book immediately grabbed my attention with the focus on Teddy Bears and the mention of a teddy bear shop in the blurb.

While Bearly Departed was an enjoyable read, it sadly wasn’t as good as I hoped. But let me start by listing what I did enjoy. I really liked the teddy bear focus, I thought it was cool to read about a teddy bear shop and some of the issues and topics surrounding that. I liked how they hosted special events, did tours and used social media and I enjoyed reading about the business. I would have liked to read more about the Teddy bear shop, but it was closed for a big part of he book. I also liked the overall story well enough. While there were things that bothered me, there were also parts I did enjoy. And I was in the mood for a cozy mystery, so I did feel like this book fit my mood very well.

The mystery was okay. I was curious who the murderer was, but while I didn’t really try and figure the mystery out I wasn’t surprised at all when we found out who the murderer was. I kept hoping there would be a twist, because it wouldn’t actually be that person, but yes it was. There was a bit of a side plot line/ red herring, I didn’t really care of rand it just felt like it added a bit too much to the story that didn’t really fit in nicely. Or maybe that’s just me. There is two events later in the book that just felt a bit overdone and unnecessary in my opinion.

I would’ve liked a stronger focus on the mystery or have the main character be more actively trying to solve it. Sasha did try and solve the mystery, but at the same time she more came across as someone who was just a bit noisy and thought about the murder and then solved it because she paid attention to a clue the detective didn’t see. On the one hand it feel more natural how she just talked a bit with people and figured things out but on the other hand it felt a bit tedious and I just wanted her to snoop and investigate a bit more.

For the most part I enjoyed the story, but didn’t really care or felt invested in what happened. The main character was okay enough, but I never really liked her, related to her or cared much. Which made it hard to feel invested in the story. I liked her passion for the store and how she was so driven to have it done well. But there were also parts where I really didn’t like her, like when she was spreading a rumor she had sort of overheard without checking if it was true. She was a bit too gossipy at times for my taste and her impulsive nature didn’t quite work for me, I mostly found it annoying, although at least it was done realistically and that impulsiveness was shown quite regularly.

Another thing that bothered me is how at times it felt like there were these extra details we didn’t really have to know sprinkled in the story. Small details that probably should be quirky or interesting, but for me it just brought down the pace. I can’t remember how often I read that the dog Rosie was doing her business. It might seem weird to mention that, but those small details broke up the pace of the story a bit for me. Guess the writing style just didn’t work for me.

When I started reading I also had the hardest time remember who was who, there is almost a bit of an info dump during the first walk Sasha takes through town, introducing you to all the side characters, who is who, where they work and who is related. It was just too much for me. Only when the story progressed and we got to see more of the side characters it got easier to remember everyone, but even then it was difficult, especially with the characters we meet less often. Although that’s also partly probably because I wasn’t as invested in the story. Oh and the side plot line about Flynn didn’t work for me either, I had no clue what the relevance was of him showing up. I thought he was a creep. And I am still not sure what the main character her opinion about him really was. It was difficult to really get a feel for what she thought at times.

To summarize: this was a cute cozy mystery with the focus on the teddy bear shop and factory. I liked the focus on the teddy bear shop and it was cool to read about, I just would’ve liked to read even more about that as it was closed for a big part of the book. The mystery was decent and I was curious who the murderer was. I wasn’t as invested in the story or the mystery as I had hoped and wasn’t surprised when we found out who the murderer was. At times it felt like nothing much was happening and at other times it felt like there were too many, in my opinion, unnecessary parts cluttering up the pace. Like these small little details that kept being added and I just thought were unnecessary and didn’t add anything. I didn’t really care for the main character and had some trouble keeping the side characters separate. Overall it was a cute read with parts that I liked and it fit my reading mood, but it just missed the mark a bit for me.