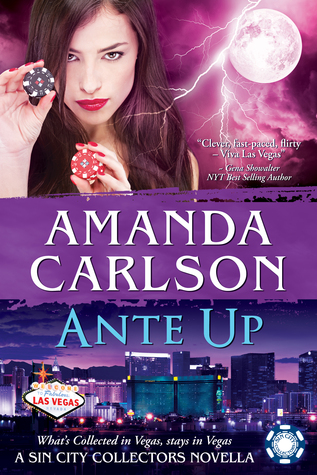 After having read the first book by Amanda Carlson in the Debt Collector series I was happy to also receive the second book for review. This book is told from the point of views of Diesel and Sofia, I liked both characters in Aces Wild so i was happy to learn more about them and their story. Nevada and Jack both played a big part in this book as well as well as two other character which we find out will be the main characters in the next book. It’s fun to see the books being connected in this way.

Diesel is a werewolf shapeshifter with moon issues and a hatred towards sex demons, he get’s a mission to prove himself for the agency and ofcourse it involves both the full moon and an incubus. Sofia is a witch who tries to build a new home in Las Vegas. They are attracted to each other and their paths cross. Their romance is very different then the romance in Aces Wild and I liked how they didn’t beat around the bush and confessed they liked the other early in the story already. They form a great team.

It was also fun to see Nevada from Sofia’s point of view and even though he has this though attitude, it was obvious she actually cared about Sofia. There are also some interesting scenes with the new character Ginger and her role in a bigger plot. The story in this book also is the set-up for the story in the next book and I am curious to see what will happen next.

All in all it was a fun and enjoyable story, again the novella length is perfect for the story and it didn’t feel rushed or hurried anywhere. It was the perfect length for this story, while at the same time it’s part of a much larger story. While I enjoyed the book I didn’t have the urge to keep reading when I put it down and even though it’s short it still took me a while to finish it.

To conclude: Ante Up is a nice addition to the Sin City Collectors, characters from the previous book make an appearance again and we’re also introduced to the next couple. The romance was done well and the story never felt hurried. It was a fun and enjoyable story.

You can add Ante Up to your to-read list on Goodreads.

4 responses to “Review: Ante Up by Amanda Carlson”