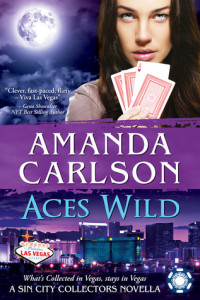 My Review:
I received Amanda Carlson newsletter with information about her newest book Aces Wild and it sounded like a fun read and I immediately impulse bought it. This book is exactly what the blurb suggest a fun story with romance, supernatural and action that takes place in Las Vegas. While at some points the story was a bit cliché and predictable it was still a lot of fun to read and I am looking forward to read the rest of this series and find out about whom the main characters in those books are.

I liked the characters in this book, although the story was a bit short and I would’ve liked to get to know them better. Still there was some background and personality information about both main character intertwined in the plot and it still gave me a sense of who they are. I was impressed how good this story was and how it manages to put a story, character information and world building is a relatively short read without it getting rushed or dumped onto the reader.
The romance between the two main characters was nice, but I didn’t really feel their connection and it felt like more attraction then love. There just wasn’t anything special about the romance for me.

This book is about a Dhampire called Nevada and a Hellhound Jake and for some mysterious reason they get a collection together. Most of the explanations and world building are interwoven into the story, but there’s a lot that needs to be explaining and sometimes it feels like every explanation is put into a dialogue and it can feel a bit off at times. Although on the other hand it was done nicely without infodumps, so that’s a plus. While a lot of questions remain, this first book still gives enough information to get a grip on the world and have an idea how it works. Considering the supernatural we learn more about dampires, vampires and hellhounds in this book then the other supes as those are the types the main characters are.

To conclude: Aces Wild is a fun story filled with action, romance and the supernatural. I liked the story and for such a relatively short book it still manages to pay attention to both the story, characters and world building. The pace was done well and I am looking forward to reading more books in this series.

You can add this book to-read list on Goodreads