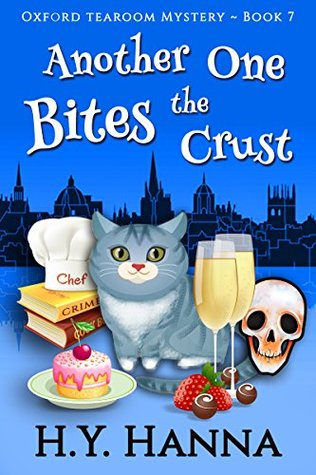 Another One Bites the Crust (Oxford Tearoom Mysteries #7)
by H.Y. Hanna

Blurb:
Champagne and ball gowns, fairy lights and music… Oxford summer balls are one of the highlights of the calendar and tearoom sleuth Gemma Rose is looking forward to taking a break and slipping into something gorgeous for the evening. But when the night ends with a celebrity chef murdered by his own whisk, Gemma finds herself plunged into a new mystery—and the nosy Old Biddies keen to help with the investigation!

But trouble is also brewing at her quaint Cotswolds tearoom: between fighting claims that she’s serving “fake” custard tarts and stopping her little tabby, Muesli, from being catnapped, Gemma has her hands full—and that’s before she has to fend off an amorous Italian. To top it all, her boyfriend Devlin’s mother is coming to visit and Gemma is anxious to make a good impression… although Mrs O’Connor isn’t quite what she expected!

With so much going on, it’s a recipe for disaster—but with a bit of help from her mother, Gemma might just solve the case… and live to bake another day.

My Review:
I received a free copy from the author and voluntarily reviewed this book.

This is one of my favorite cozy mystery series and I happily started reading this. Another One Bites the Crust is a great seventh book in this series. There’s a new murder mystery, more from the already familiar characters and a bunch of fun side plot lines. This book was so much fun and it felt like I flew through it. I really enjoyed it!

Besides the mystery, there is a bunch of side plot lines going on. Devlin’s mother is visiting and meeting Gemma for the first time, Gemma’s mother is trying to set her daughter up with some new products, there is a lady who tries to catnap Muesli and then there are the characters and possible suspects we meet that are play part of the mystery. I like how there is always something new going on in these books and they keep my attention with a great mystery and fun side plot lines.

I liked returning to Oxford and spending time with Gemma, her friends and family. We get to see the Old Biddies again, who try to help solve the murderer and even Cassie gets involved this time. I liked seeing how Gemma handled the meeting with Devlin’s mom. There are some funny scenes throughout the book as well. Although it did bother me a bit that Gemma lied to Devlin twice.

Everything got wrapped up nicely toward the end and I really liked the epilogue and how one of the side plot lines got resolved exactly as I hoped. It was such an awesome scene and I was happy to see what happened.

To summarize: HY Hanna has written another great book! This seventh book in the Oxford Tearoom Mystery series is another success. I had fun trying to figure out who the murderer was and from the start I was so sure I knew who the murderer was. But there was a great twist and it turned out my guess was wrong, but once the murderer was revealed I did realize we got some hints in that direction. It was very well done. There is a bunch of fun side plot lines and it’s great to spend some time with these familiar characters again and meet some new ones. All in all this was a great cozy mystery and I am already looking forward to the next book!

10 responses to “Review: Another One Bites the Crust by H.Y. Hanna”