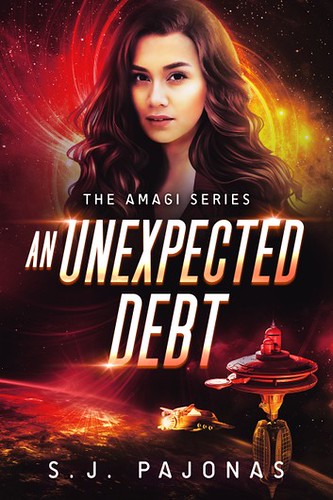 An Unexpected Debt (The Amagi Series #1)
by S.J. Pajonas

Blurb:
Hijacked dreams and a high-stakes gamble. Can a young woman secure suitors while trying to soar among the stars?

Skylar Kawabata has her future mapped out. Frustrated by years of misuse from her family, she’s got her Class Three pilot license firmly in hand and plans to take over her mother’s interstellar shipping business. But when she discovers it’s been sold right out from under her to a handsome but infuriating man, the outraged ex-heiress vows to make him pay.

Already struggling to feel worthy enough to attract top-notch men to build her relationship network, Skylar’s fight for her inheritance turns into a heart-stopping power play. But she’s up against long odds from a love-match setup with an old crush, an impulsive bet with the man controlling her legacy, and one of her many dads becoming a dangerous threat…

Can Skylar navigate to the destiny she desires, or will she get knocked off-course?

An Unexpected Debt is the first book in The Amagi science fiction romance series. If you like mouthy heroines, an array of delicious men, and amazing world-building, then you’ll adore S. J. Pajonas’ action-packed adventure.

I received a copy from the author and voluntarily reviewed it.

An Unexpected Debt is the first book in S.J. Pajonas’ Amagi series, it’s a spin-off from her Flyght series and I was really excited to dive into this new series. I already got a bit of a feel for Skylar, the main character in this book, in the prequel novella An Unforgiving Desert and I was looking forward to getting to know her more. This book definitely delivered in that sense. I wasn’t quite sure what to expect from this series, but it was fun to find that out.

After the prequel novella I was ready to dive into this new series and read about Skylar. I found the start of this book to be a bit slow, there’s a bit of build up till the point where Skylar gets some really bad news and then there is a lot of dealing with that. I liked seeing things progress and the change of direction the plot took before things changed again. As usual with Pajonas’ books I am never quite sure which direction the plot will take. The changes in direction feel realistic with the way Skylar changes her mind. There is an event later in this book that will influence what Skylar is going to do next and I am really curious how that’s going to play out.

Sadly at times I struggled a bit with Skylar, I didn’t fully like her, but I also feel she’s a very realistic character and I think it’s going to be great seeing her change and develop throughout the series. It almost feels like she hits her lowest point already here in book 1, but knowing the author that’s probably not true. Skylar has had a tough life so far and it’s getting even worse with some of the things she has to deal with in this book. She also has quite the attitude. She can be quick to anger and if someone crosses her she won’t forget it. I didn’t really like how she acted at times, even though I understood why she acted the way she did. She could be a bit harsh at times and push people away. I liked how she isn’t what you expect and how she pretends to be this princess who only cares about having fun and sleeping around, but she’s actually quite smart and wants a deeper connection. She is an interesting character and I liked seeing how she dealt with things and also made some decisions to confide in people later in the book. I look forward to see how she deals with the things to come and how she will change as a character.

This book already makes a solid start for Skylar’s harem. The guy from the prequel novella, Kalvin, we don’t see at all in this book even though he is mentioned a few times. Most of the romantic focus is on Saif, who seems like a great guy so far. He’s so patient with Skylar and frankly I was kinda surprised he didn’t walk away a few times, but he is determined to make it work and knows Skylar doesn’t always mean it when she pushes him away. I didn’t fully feel their romance yet, but I liked the connection they made in the past already and how they reconnect now. I just feel Skylar is so down in this book she isn’t quite at the stage to really let him in, but I liked seeing the beginnings of that. Their relationship definitely has potential, but I hope to feel their spark and mutual love more in future books.

There’s also another guy with whom Skylar has a bit of a rivalry going on, they fight a lot and keep bumping into one another. I am not sure whether he will end up in her network, but if he does, they sure have a long way to go before it gets there. I do feel they’re developing a bit of understanding for one another, so who knows where that goes.

This book has quite the similar feel to the Flyght series from which it’s a spin-off, but at the same time it also feels quite different. I like this balance. We get to check in with familiar characters from the Flyght series, but as the focus is now on Skylar it all feels quite differently and we experience things in a different way. It’s also a few years later so we see how some characters like Carlos and Lila have changed. I like seeing Skylar and Vivian’s friendship now from Skylar’s point of view. It’s also great to see how Skylar interacts with Marcello now and the differences and parallels with Vivian. I am glad to see Ai was back as well as I really liked her in the Flyght series. I loved returning to this world and seeing more of it. It’s fun and comforting getting a whole new series in a world I already love.

To summarize: It was exciting to return to this world for a new series. This book feels both fresh and familiar as this book follows a new main character in a world I already know. The story has quite some twists and changes of direction and was never sure where it would go. I thought it was going one way, but I don’t think it will go there now. After a twist at the end of this book I am quite curious to see how that plays out in future books. I did struggle with Skylar a bit as I didn’t fully like how she acted. She’s been through a lot and goes through a lot in this book. She’s had a tough life and it has shaped her, she can have quite the temper and is used to pushing people away. I understand why she acts the way she does, but I didn’t always like her because of her behavior. I liked the set up for the romance with Saif, but didn’t fully feel the romance yet. Saif seems like a great guy, but I feel like their relationship still needs to develop a bit more. I loved returning to this world seeing some of the same side characters again and spending time in the same worlds.

4 responses to “Review: An Unexpected Debt by S.J. Pajonas”