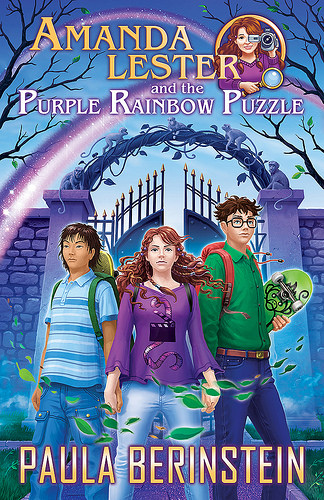 Blurb:
Purple rainbows, a mysterious crypt, and pots of gold . . .

Things are not going well for Amanda and the secret detective school. A priceless artifact has disappeared, a dangerous hacker is manipulating matter, and zombies are being seen all over the Lake District.

Then the real trouble starts. When her cousins go missing and her friend Clive is kidnapped, Amanda is forced to turn to someone she’d rather not deal with: her old boyfriend Scapulus Holmes. But then he vanishes too. Now’s she’s sure that arch-villain Blixus Moriarty is involved . . . or is he?

My Review:
This is another great book in the Amanda Lester, Detective series. One of the things I love most abut this series is how each book smoothly builds upon the foundation of the previous ones. And that fact might be most obvious in this book so far with how all of the problems and mysteries they are dealing with are a direct result of what happened in book 1 and 2 and we will find out that things are even more connected than they seem at first. It was great to have new mysteries for them to solve, but also have that feel of continuity. It’s not just another adventure, these problems exists because of what happened previously.

This book has a slightly different feel than the first two books as this book takes place during summer vacation. Amanda stays on school instead of returning to her parents or to LA to help her film idol Darius Plover. This means no classes or school stuff and more focus on the mystery. On the one hand I kinda misses the feel of normalcy that the classes gave, but I also liked the different feel and how there was more focus on solving the mysteries. And whew they have quite a lot of mysteries to solve in this book, there is so much going on that it could be hard to keep everything straight at times, but it also made for a very interesting and compelling story. The beginning felt a bit slow as they didn’t make much progress, but eventually things start rolling and happening and I wanted to know how everything tied together and if they would be able to solve everything.

I really enjoyed this book and had a lot of fun following Amanda and her friends again and seeing them solve the mysteries. I did have a few small issues with the actual plot though, like I mentioned in my review of Amanda Lester and the Orange Crystal Crisis, the science is very far fetched and even dips into fantasy territory a few times. That’s an issue I had with this book as well, although the lack of explanation until the end actually worked for me as that way I didn’t keep my mind on why it wasn’t possible all the time and was more able to ignore the fact that it wasn’t possible most of the time.

Then there is the plot line about the detective bible, it just seemed a bit silly. It’s just a book, but also so much more, but how much more? We don’t know as we don’t learn what’s actually in the book. It just was a bit frustrating at times, I had hoped we would learn more about the bible in this book, but we don’t. There’s almost zero progress when it comes to that plot line. And things go bad in a big way and it just felt silly how all the teachers were acting about that book and like it was so easy to go away from your stable job and start anew.

I really like the cast of characters in this book. Amanda and her friend all are great characters, they have a lot of personality, flaws and feel like real people. There’s also a bit of relationship drama added in this book and I actually am kinda curious with whom Amanda will end up with. And I am still curious about Nick his character, I don’t want to spoil too much, but I love shades of grey and his character suggest things actually might not be as black and white as it seems. I just wish the criminals had a bit more of that, as almost all of the villains seem sure pure evil and nasty and crazy. We do learn an interesting tidbit about one of the villains though.

Then there is Ivy and her dog Nigel who are two of my favourite characters. Ivy is blind, but she’s still a great detective and uses her hearing to figure out some things. And I am liking Simon and Clive more and more with each book. I started disliking Amphora a bit more in this book as she seemed a bit nasty to Amanda and some other characters. Holmes stays pretty much to the background in this book, even though he plays an important part, he is less active with solving the mysteries and going out to do research as he’s busy with the hacker. I really disliked the hacker, especially when we learned who it was. The character just seemed a bit over the top evil and nasty. Then there is Gordon who sort of joins the group and who get’s more important and we see a bit about Ivy her sister Fern.

To summarize: this was another great book in this series. I love how the story is a direct continuation of what happened in the previous books, while also dealing with new problems. I like that continuity and how the problems in this book are a direct result of what happened in the previous books. There are a lot of mysteries and things going on in this book and it could be a bit difficult to keep everything straight at times, but I really enjoyed the story and figuring out what had happened. I did have a small issue with the science, which seemed more like fantasy at times and how the detective bible was so important, but if felt a bit silly as we never know what’s exactly in it and why it’s so important. The characters are great and I start liking most of them more with each book. I am curious about Nick his character. The villains do seem a bit too evil and nasty at times, but we did learn an interesting tidbit about one of the villains. I really like Amanda and her friends, there are some interesting developments with some characters too and I feel like we get to know them better in each book. I am looking forward to the next book!

What kind of villains do you like seeing in books?

19 responses to “Review: Amanda Lester and the Purple Rainbow Puzzle by Paula Berinstein”