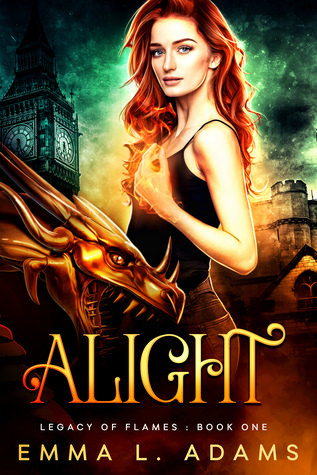 Blurb:
It’s not easy being one of the last living dragon shifters in London.

Two years ago, when the faeries attacked the mortal realm, all supernaturals were dragged into the open. Unfortunately for dragon shifters like Ember and her sister, dragons are still hunted by humans and supernaturals alike. Keeping a low profile is difficult with monsters roaming the streets, but Ember and her band of rogue shifters have managed to survive.

Until their oldest enemy, the supernatural-hunting Orion League, emerges from the shadows and captures Ember’s sister.

To get her back, Ember is prepared to walk into the depths of London’s magical underworld, even if it means kidnapping a lethal ex-hunter who’d like nothing better than to add her name to his kill list. His inside knowledge of the League is the key to saving her sister, but with their allies turning on them, Ember must choose who to trust or meet the same end as the other dragon shifters.

I was so excited when I heard of this new series by Emma L Adams. I really enjoy Emma’s books and this series sounded really good. It takes place in the same world as her Changeling series, but it takes place in a different place and sooner after the invasion than the Changeling series. It also has a very different focus, namely more on the shifters. I am a big fan of shifter books, so I really liked how the author put the focus on shifters in this book. And it even has some original type of shifters!

Alight was a well paced book with lots of action and focus on shifters. There were some great action scenes. Shifters have been hunted by The League’s hunters even before the invasion by the faeries. But even now they still hunt shifters and other supernaturals. They are quite devoted to their mission. The book started with a chapter that shows where Ember and her sister Cori are when the invasion takes place and it instantly got me into the story. Then we switch to two years later and the story continues. Most of the story deals with The League and how Ember and her friends try to avoid them and stay alive, but when her sister gets captured she decides to do whatever it takes to get her back.

Ember was a great main character to read about, she was fiercely protective of her sister and friends. I liked reading about her dragon side and form. She doesn’t remember the first few years of her life and she doesn’t know if there are any other dragon shifters except for her sister, so there’s a bit of mystery there as well. She only has this notebook, with parts she can’t read. Then there are her best friends who are both shifters as well. It was fun to read more about the shifters in this world and get to know more about them. Becks and Will were interesting side characters. But I was even more curious about Astor, we learn bits and pieces from him and I enjoyed reading about him. There is a hint of a possible romance, but it’s a subplot line mostly. I did like that hint or romance though and I am curious how that will progress.

I already knew a bit about this world thanks to having read most of the Changeling series, so it felt a bit familiar already. but this book shows a very different view and part of this world, so it felt new and fresh as well. And we learn a lot more about the hunters, the League and shifters, which were all things that weren’t addressed as much in the Changeling series or not like this. It was great to return to a familiar world and follow new characters and a different focus. It also felt a tad darker than the Changeling series, especially at the end when we get a glimpse of what exactly the League does with shifters they capture.

To summarize: I really enjoyed this book and getting to return to a world I already knew, but with a different focus. Alight takes place in the same world as the Changeling series, but in a different time and it focuses more on the hunters and shifters. I liked reading about the different type of shifters and the focus on shifters was great! It is action packed and well paced and it kept my attention during the whole book. Ember was a great main character to read about and I liked the fact she was a dragon shifter. There’s a hint of a possible romance, but it stays pretty much to the sidelines. The world already felt a bit familiar as it was the same world as the Changeling series, but it felt very different as well. I am looking forward to read book 2!

Do you like reading about dragons or dragon shifters?