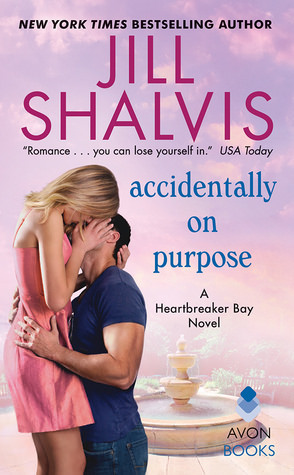 Blurb:
There’s no such thing as a little in love…

Elle Wheaten’s priorities: friends, career, and kick-ass shoes. Then there’s the muscular wall of stubbornness that’s security expert Archer Hunt—who comes before everything else. No point in telling Mr. “Feels-Free Zone” that, though. Elle will just see other men until she gets over Archer . . . which should only take a lifetime . . .

There’s no such thing as a little in lust…

Archer’s wanted the best for Elle ever since he sacrificed his law-enforcement career to save her. But now that she’s earned happiness and success, Archer just wants Elle 24/7. Their chemistry could start the next San Francisco Earthquake, and Archer doesn’t want to be responsible for the damage. The alternative? Watch her go out with guys who aren’t him . . .

There is such a thing as…

As far as Archer’s concerned, nobody is good enough for Elle. But when he sets out to prove it by sabotaging her dates, she gets mad—and things get hot as hell. Now Archer has a new mission: prove to Elle that her perfect man has been here all along…

My Review:
I received a free copy of this book from the publisher through edelweiss and voluntarily reviewed it.

I really am enjoying this series so far and was excited to start this book and a bit hesitant as well as I wasn’t sure if I would like Elle and Archer as much as the others as main characters. And it turns out I was right to be a bit hesitant as while this was still a very good book, these two weren’t my favorite couple. The whole fight and then kiss type of relationship doesn’t quite work for me.

Elle and Archer have a bit of a past, what exactly happened back then when they first met we slowly find out over the course of this book. They can’t stand each other and always fight and argue when they are together. But both are very stubborn characters who hide their vulnerabilities behind a shield. Elle describes herself as a ice queen one time and that fits and Archer is a rock who never shows emotions and is very distant with Elle. But beyond the exterior they actually care about each other a lot, they just don’t show it, until that slowly changes.

My main issue with this book was that I didn’t care as much for Elle and Archer as the previous main characters. Elle and Archer are both were the type of characters who got on my nerves at times. They were fighting and saying mean things (mostly Elle did this) to each other and while I knew that was a shield, I just wanted them to be nice to each other for a change as well. It just isn’t the type of romance that I prefer to read about. From about the halfway point things did improve a bit and we did got some touching scenes between them, but for most of the book they are in this pretend to hate each other while they love each other part.

Fighting and arguing is what they do best, but they kinda like that. I don’t know it’s just not my type of romance. It’s a bit of an enemies to lovers type of romance, even though they never really hate each other, just pretend to do so and they do get angry at each other at times. Especially Elle at Archer and she jumps at conclusions and starts yelling and being angry at him without hearing his side of the story. She also says some pretty mean things to him at times. And yes I know she really did care about him beyond that, but she also did mean those things when she said them. At times I wondered why Archer didn’t get enough from that. Well because he cared for her I guess.

But even though I had a bit of an issue with the two main characters and their romance I still mostly enjoyed this book. The way Jill Shalvis writes her books always sucks me in and I still easily read through the book. The pace was well done and I like her writing style. I also like how we get to see more of Spence in this book and I am so excited to hear he will get his own book as I really like his character so far. The other side character mostly stayed to the side. I had hoped to see a bit more of the, but the focus really is on the main couple. I also was a tad confused about how we hardly saw Haley in this book, but did saw a new character Kylie with her dog Vinnie. Or did I just not remember her from previous books? That’s possible too, as the focus always has been on Pru, Will and Elle mostly.

There is a tiny bit of suspense, but I wouldn’t categorize it as a romantic suspense. It’s still firmly a contemporary romance book, the suspense plot line is only a very small bit and to be honest I would’ve liked to see it expanded a bit or not be there at all as now it just was there, but it was so small of a part that it just felt a tad off. The plot line with Morgan was interesting, although I would’ve liked to see more of how things ended up with her. Also sadly there was no pet in this book that played a big role like in the previous books.

To summarize: this was an another well written book in this series. I really like Shalvis her writing style and did enjoy this book despite some of the issues I had with it. I didn’t really care as much for Elle and Archer as I did about the previous couples and the fight and then kiss type off relationship they had didn’t quite work for me. Most of the book they pretended to hate each other to cover up their real feelings. It’s armor or shield they sue to protect themselves, but I am not a big fan of those type of romances and found it hard to fully feel the romance because of that. I also felt we got to see less of the side characters in this book and the focus was more firmly on the main characters and a few new side characters. It is very well written and I easily read through this book. I also liked how we got to see more of Spence in this book as he is close to Elle. And I am so excited his book will be next as I really like his character.

Do you like the type of romances where the characters fight a lot and care about each other?

14 responses to “Review: Accidentally on Purpose by Jill Shalvis”