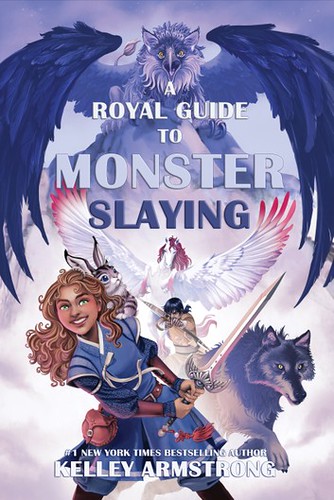 Blurb:
Twelve-year-old Rowan is next in line to be Queen; her twin brother, Rhydd, to be Royal Monster Hunter. Rowan would give anything to switch places, but the oldest child is always next in line, even if she is only older by two minutes. She resigns herself to admiring her monster-hunting aunt’s glorious sword and joining her queen mother for boring diplomatic teas. But tragedy shatters the longstanding rule, and Rowan finds herself hunting the most dangerous monster of all: a gryphon.

Accompanied by a feisty baby jackalope and a giant wolf that barely tolerates her, Rowan sets off on a journey that will see her join other unlikely allies: a boy with monster-hunting ambitions of his own, and a girl hiding secret motives. It will take all of Rowan’s skills, both physical and diplomatic, to keep this adventure on track. The future of her kingdom depends on it.

I enjoyed Kelley Armstrong’s other Middle Grade series and I liked the sound of this one, so I went in hoping this one would be just as good. And luckily it was. I had a lot of fun reading this one. I liked the story and following Rowan along on her adventures and meeting the different types of monsters.

The pace of the book is well done and there is plenty of action and danger as well. There is a bit of a sad scene toward the start of the book that I hadn’t anticipated, but it all made sense and moved the story forward. I thought it was well done how it had impact and also had value storywise. I wasn’t quite sure what I had expected from the story direction wise as I didn’t remember much from the blurb and the initial set-up made me unsure what would change or happen next. I liked the direction things took.

Rowan was a great main character, what I liked about her first is her kindness and caring, both qualities that she shows in basically the first scene. She wants to help others and really cares about those close to her. I also liked her relationship with her twin Rhydd. I like how she interacts with the other characters and how she treats the monsters she encounters and cares about them too. She makes some mistakes along the way, but she does learn form those mistakes and I liked seeing her realizing when she wasn’t handling something well. She is smart and capable, but also has her moments when she feels overwhelmed or scared.

There are some interesting side characters as well, but for me the monster side characters really stole the show. From Jacko the jackalope who was adorable and protective even though he was so small. To Malric the grumpy warg, who does care about her in her own way, seeing how they interacted and seeing him very slow warm up a bit toward her was amazing to see. Then there is a new monster that Rowan meets later on who has quite the personality and I liked seeing how Rowan bonded with her. I can’t wait to read more about them. The human side characters are great too, like some characters who join Rowan on her adventure later in the book.

I liked the variety of monsters in this book. The world building is mainly confined to the monsters and some history of the world, which worked fine here I liked how we slowly learned more about the different types of monsters and saw how Rowan interacted with them. Some monsters are mythical creatures and other are combinations of other animals, I liked the wide variety and the uniqueness of these creatures or how the author gave her own twist to some mythical creatures for this book.

To summarize: This was an awesome read. I liked the monster filled world that the author created and following Rowan on her adventure. The pacing was well done and I liked how there was plenty of danger and adventure. Rowan was an awesome main character and I liked how kind and caring she was and also how she handles the monsters she encounters. There are some fun side characters, like Rowan’s twin Rhydd and some characters she meets later who join her on her adventure. The monster side characters really stole the show for me, from Jacko to Malric to another monster she encounters later, they all were fun to read about and had their own personality. This was such a fun read and I am looking forward to book 2!

What are your favorite Middle Grade reads?

6 responses to “Review: A Royal Guide to Monster Slaying by Kelley Armstrong”