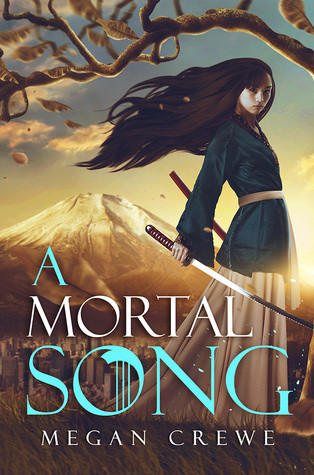 A Mortal Song
by Megan Crewe

Blurb:
Sora’s life was full of magic–until she discovered it was all a lie.

Heir to Mt. Fuji’s spirit kingdom, Sora yearns to finally take on the sacred kami duties. But just as she confronts her parents to make a plea, a ghostly army invades the mountain. Barely escaping with her life, Sora follows her mother’s last instructions to a heart-wrenching discovery: she is a human changeling, raised as a decoy while her parents’ true daughter remained safe but unaware in modern-day Tokyo. Her powers were only borrowed, never her own. Now, with the world’s natural cycles falling into chaos and the ghosts plotting an even more deadly assault, it falls on her to train the unprepared kami princess.

As Sora struggles with her emerging human weaknesses and the draw of an unanticipated ally with secrets of his own, she vows to keep fighting for her loved ones and the world they once protected. But for one mortal girl to make a difference in this desperate war between the spirits, she may have to give up the only home she’s ever known.

It was the cover that caught my attention and the blurb that convinced me I had to read this one. I was so happy I managed to got a review copy from netgalley. I really enjoyed A Mortal Song, it was an unique read with how the story is told from someone who would normally be a side character. It took place in Japan and there was some Japanese mythology in there as well. There was action, magic and a saving the world plot line, but it’s also more than that. It’s about how power and strength can come in different shapes, finding out who you are and what being human is about.

A Mortal Song follows the story of Sora, who always thought she was a kami, but then she learns everything she believed was a lie. She’s just a normal human and the people she thought were her parents aren’t. It was very interesting to read about Sora her struggle with this. She has to deal with knowing her whole life was base don a lie, not having magic and just being human and everything that comes with it. I liked how this book turned things around, instead of the normal main character finding out she’s special, we have a main character who thought she was special, and finding out she isn’t. I really liked this.

This book is mostly Sora her journey, her mortal song as the title calls it. It’s very fitting I think and the cover fits the book as well. I think we get to know Sora the most of all the characters as we only get her perspective, but that was fine with me. Sora was an interesting character and there’s a lot of character change in this book. The side characters all were great too, although I would’ve liked to get to know them a bit better. From Takeo who has been Sora her friend since they were young. To Keji who was just a normal human who gets involved. Then there is Chiyo who is the real kami and who got switched with Sora at birth. And more. I also liked how the kami felt a bit off to human standards and how Sora eventually realizes this and how kami and humans are different. It was interesting. There is a bit of romance, but it really is just a subplot, I did like it and how it was handled. It’s very subtle, but done well. I also liked how Sora handles things with the romance.

Then there is the story, the danger and Sora and her friends their journey throughout Japan to save their home. There are obstacles, doubts and difficult parts. The book kept my attention the whole time and I really enjoyed reading it. The pace was very well done. It is a bit of a longer book than I normally read at close to 400 pages, but the length was perfect for the story. I did think the ending was a tad rushed, it also seemed a bit too easily how things got solved in the end, but on the other hand I also liked how things were handled as it was a bit different. I also would’ve liked to see more of what happens afterwards or maybe a sort of epilogue, but that also might be because I got so involved in the story and wanted to read more about Sora and how she would adjust to life after everything that had happened in this book.

The world building isn’t the focus of this book, but the world did came alive. We learn about the kami, their magic and tasks and mount Fuji. We get to travel through Tokyo and the surrounding regions with Sora and her friends. There are ghosts and demons and along the way they find out a bit more about ghosts and what works against them. I liked the focus on Japanese mythology that gave the book a unique feel. And I loved imaging how everything looked like.

To summarize: I really enjoyed this book! The book follows Sora her journey after finding out she isn’t a kami, but just a normal human. I liked reading about her struggles and seeing her character change and find her own strength along the way. This kept my attention the whole time and the pace was well done. The ending felt a bit rushed and like things got fixed a bit too easily, but I also liked how things got handled. I just would’ve liked it to get a bit more dragged out around the ending. Sora is a great main character and I liked reading about her, the side characters are fun too although we get to know less about them and there’s a bit of romance which was subtle, but well done. I also like the Japanese mythology and feel of the book. Overall this was a great read and I am glad I read it!

Have you ever read a book that took place in Japan?

16 responses to “Review: A Mortal Song by Megan Crewe”