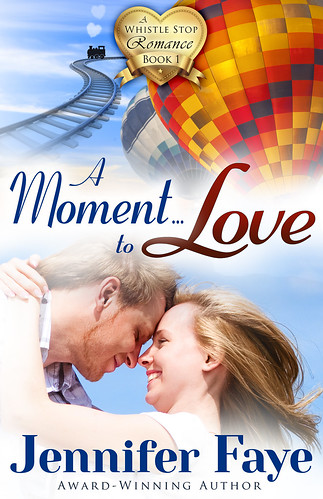 A Moment to Love (Whistle Stop Romance #1)
by Jennifer Faye

I was in the mood for a good contemporary romance, so I decided to read this book. While I had some issues, overall it was a fun and enjoyable book. I had some issues with the main conflict, as it seemed mostly for the sake of conflict. There was a story behind it, but I felt that if the characters just talked about it more, they could find a way out of this. And then in the end it got solved so fast it all seemed pointless, like they lost nothing at all and they fought the whole book for nothing. Although on the other hand I did love the ending and was happy with how things turned out.

The characters are likeable and while the story mostly focusses on the two main characters, I still got the feeling there was some story behind the other characters we met as well, we just don’t get to hear their story yet. The story follows Alexis, a business women who comes to whistle stop to do finalize a business deal, but she gets so much more. I thought it was a bit weird how she could take a few weeks off her work to fly out to whistle town herself. She is a nice character and she is used to working hard and doing what is expected of her, her father got a nasty heart attack a while ago and it’s obvious she cares and worries a lot about him. I would’ve liked to see more interactions between them, but he was mostly absent from the actual story and they mostly had some phone contact about the business only.

Then there is Cord, a cowboy who risks losing the only home and way of life he had ever known. I thought he was a bit too stubborn and set in his ways at times, and refused to really listen or talk with Alexi, but he was a nice guy. He really shows his gently side with Alexi. Alexi and Cord where so good for each other. Alexi isn’t used to taking time for herself and Cord shows her that, he also helps her overcomes an old fear.

I had some mixed feelings about the romance. On the one hand I liked these two together, but I am not a fan of the enemies to lovers trope and while they often said they could separate business and pleasure, it was obvious that it doesn’t work that way. Then there’s the issue that both of them have a past and they clearly let that colour their present. I understand that those events made them both a bit weary to love again, at times they didn’t seem to understand that they where different person now and the one they where falling in love with isn’t their ex. Then there where some miscommunication issues and some instances where I felt like they just needed to talk a bit more. Their romance felt a bit rocky to me and I loved some scenes and I didn’t like others. I was happy with how everything turned out in the end though.

The setting made up for a lot of things I didn’t like, as I just loved the little town of Whistle Stop. I like small town settings and just like the Alexi I fell in love with the town and I am really excited to see more of it and if they can rebuild this town to it’s former glory. There is a lot of gossip and word travels fast, but I liked most of the characters and they just seemed genuinely interested in everything and they cared about their town. Then there is the setting in New Mexico and while I often prefer nature settings in the sense of forest, this book really convinced me of the beauty in this place as well.

To conclude: I enjoyed this book and I loved the setting of Whistle stop. I had an issue with the conflict which was solved a bit too easily in the end, but I did like how the ending wrapped things up neatly. I liked the characters and though they were good for each other, but I had some mixed feelings about their romance. I am not a fan of the enemies to lover trope and it felt a bit off to me, but there where some really nice scenes between them as well. While was a bit on the fence about this book at times, I did enjoy it and am looking forward to future books in this series!

What do you think of enemies-to-lovers romances? And what is the best book with this trope that you read?

16 responses to “Review: A Moment to Love by Jennifer Faye”