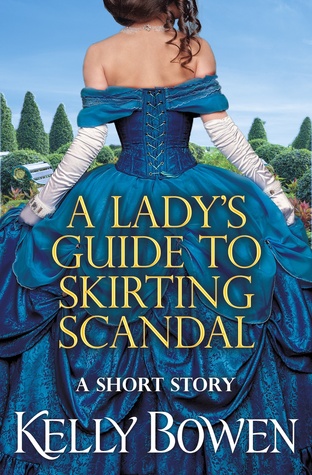 A Lady’s Guide to Skirting Scandal (The Lords of Worth #2.5)
by Kelly Bowen

Blurb:
A delightful romp to be read in one sitting—for fans of Sarah MacLean, Julia Quinn, and Tessa Dare.

Lady Viola Hextall is bored—of the ocean, her chaperones, and the woeful lack of available dukes on the ocean voyage from London to New York. Scrambling for any diversion short of jumping overboard, Viola strikes up a conversation with the ship’s rough-hewn, blue-eyed surgeon—and discovers an immediate cure for what ails her…

To Nathaniel Shaw, Viola has the bearing of a lady and the spirit of an adventurer—an unlikely combination that he finds utterly irresistible. So he’s hoping to convince Viola to leave the stifling ballrooms of London high society behind because there is a big, wide world just waiting for them to explore—together.

My Review:
I received a free copy from the publisher in exchange for an honest review

This sounded like a fun short historical romance book and that’s exactly what it was. I quite enjoyed it. The setting was fun and took place on a boat. Lady Viola Hextall is bored and decided to start a conversation with the surgeon Nathaniel Shaw. Viola thought she knew what she wanted out of life, marry a duke and become a duchess, Nathaniel makes her question things. I quite liked the message of this short story about thinking what you really want out of life and who’s opinion matters. Granted it’s a short story so the change went a bit too quickly for my liking, but I really enjoyed seeing Viola let out her real self and realize that what she thought she wanted isn’t what she wants at all.

The ship setting was original and how they were sailing to the America’s. Although there wasn’t much focus on the setting, with the exception of the fact that this brought them al together. I still liked it and how it took place away from the confines of society. I did like the mention of the Lewis and Clark expedition as I remember this from my American history course I followed during university. I like this time in history with America not being fully discovered yet, I think I would like to read more historical books set into this period as I am quite interested in American history.

As I mentioned before, it’s a quick read and can easily be read in one sitting. It was a fun and enjoyable and hot and it certainly makes me curious about the rest of the series. It can be read as a standalone, although there was a hint to something that happened in the past, which I am assuming refers to events in the previous books. And the mention some people who probably are characters in the previous books as well. It could’ve easily been longer though and I would’ve liked to see things develop and change a bit more slowly, but all in all I did enjoy this one.

The characters are likeable. Viola less so at first as it’s obvious she believes she has to be what society thinks she has to be and she puts her own wants and needs away, after a talk with Nathaniel though I liked her much more and I was pleased with how the story ended. Nathaniel was a surgeon and hew knew exactly what he wanted out of life and wasn’t afraid to make Viola question her beliefs. I liked his confidence and how he knew exactly what he wanted.

As soon as Viola and Nathaniel meet the sparks fly and soon after the talk they move from talking to doing more. There are some sex scenes as well. The focus is mostly on the romance, but as it’s short it’s hard to really get to know the characters, nevertheless I thought the romance worked quite well. I thought it was worked and I understood why these two were attracted to each other. Nathaniel wanted a daring women who wasn’t afraid to of the sight of blood and Viola appreciated made to feel awesome and Nathaniel made her question what she thought was true. They were good for each other. There was a scene with fingers being chopped off I thought was quite disturbing, but the characters didn’t seem to mind.

To conclude: This was a short and hot historical romance novella, it can be read as standalone from the series, but I think there are some hints to what happened in previous book. Even though it was short it was well written and I enjoyed it. I just wished some changes and developments had taken a bit longer. The romance was well done, even though it developed a bit quickly. I liked how Viola changed and realized what she thought she wanted was more based on other people their ideas. All in all a fun novella and I am planning to check out the earlier books in this series as well.

Any recommendations for historical books set during the exploration of america years?

12 responses to “Review: A Lady’s Guide to Skirting Scandal by Kelly Bowen”