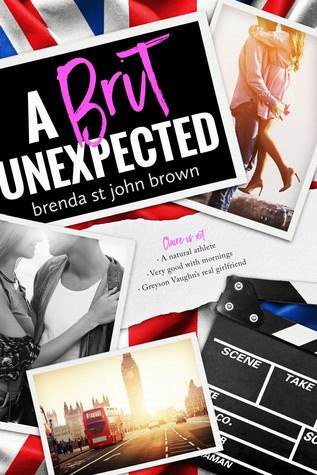 Blurb:
How do you know when a fake relationship turns into a real one? #AskingForAFriend

But she pretends to be his girlfriend on television. And Twitter. And the gossip websites that question Every. Single. Thing. about his movie star existence. Including the question on everyone’s lips — #WhosThatGirl?

Enlisted by her grandmother to act as Greyson’s “mysterious English girlfriend” during a weekend at Castle Calder, Claire agrees to help the Hollywood hottie combat rumors of stalking his pop-star ex. She needs a distraction — from grad school, bills and her dull-as-dishwater love life — and, well, it’s only for a weekend.

Until Greyson asks her to continue the ruse through his upcoming London premiere. And another trip to Castle Calder for a sexy weekend escape. Where there are no cameras and no reporters. Nothing but the two of them and a “fake” relationship that’s starting to feel very, very real.

A Brit Unexpected is the second book in the Castle Calder series, but it works as a standalone as well. It was fun to return to Castle Calder and see another one of the girl we met in book 1 find love. This first book focused on Bea, this book is Claire’s story. It was a fun read, with cute and some hotter scenes. And the setting is done well. I like how Castle Calder is described. The characters also visited some other places in this book. It was fun to see some already familiar characters from book 1 again in this book.

A Brit Unexpected is well written with short length chapters, which makes it easy to pick up an read a chapter or two. Unfortunately I read it during a time where I didn’t have as much time to read and I felt that prevented me from fully getting into the book as I only made time to read a chapter or two each night. It was a fun read though and I did enjoy it when I was reading it.

Besides that I had a few minor issues, like how the ending seemed a bit abrupt and there were a few scenes I would’ve liked to read and experience instead of only hearing about it afterwards. As it made it hard to fully feel the romance sometimes because of that. As I felt we missed a few scenes that could’ve added to that feel in my opinion. Like the texts they exchanged when they don’t see it each other. I felt like those text helped them get to know each other, but the reader doesn’t get to read those.

This book is a bit of a fake romance story combined with the topic of dating someone popular. I usually am not a fan of the fake romance/ engagement/ marriage type of stories, but I thought the author handled it well in this book. It felt pretty realistic without too much drama or miscommunication, which I could appreciate. It did deal with the question what is real and what isn’t and what happens when fake feelings turn into real ones.

There was no big conflict in this book, which worked well for me. There are a few instances of lack of communication and people jumping to conclusions. But mostly what stood in their way were their own doubts and fears. And part of the focus was on the characters their personalities, their difficulties with relationships and how to overcome those.

I did like both characters, they were fun to read about. Especially Claire, she seemed like a nice person, but we quickly figure out she has some flaws as well. I would’ve liked to see those explored a bit more as now it felt like it stayed on the surface a bit at times. Greyson seemed okay as well, I liked how he didn’t let the fame get to his head and he seemed pretty down to earth. Although I would’ve liked getting to know him a bit better. And the topic of him being famous didn’t play as big of a part as I had expected. I didn’t really care for that part, so that was okay with me, but at the same time it felt like it was missing a bit. I can imagine dating someone who is famous does pose it own set of challenges and there was little of that in this book, there were a few scenes that addressed it, but I felt like it only scratched the surface

To summarize: all in all A Brit Unexpected is a fun and enjoyable read about a fake relationship that turns real. The writing is great and the pace flowed well and I easily got into the book when I picked it up. Unfortunately I was never able to fully get into the story as much as I would’ve liked, but that’s probably because of not making enough time to read this book and only reading a chapter or two each evening. I also had some minor issues like how some topics could’ve been explored a bit more, a few scenes that were told that I would’ve liked to read and the ending seemed a bit abrupt. The romance was sweet and well done and I liked both characters well enough. There was no big conflict, but there were some personal issues they both have to deal with. I thought the fake relationship topic was handled well and it felt realistic. This is an author I can fully recommend if you enjoy a good YA/ NA romance book.

Do you like fake relationship romances? What’s the last one you read?