Today is the cover re-reveal for Mail-Order Groom by Cindy Flores Martinez. This cover reveal is organized by Lola’s Blog Tours. 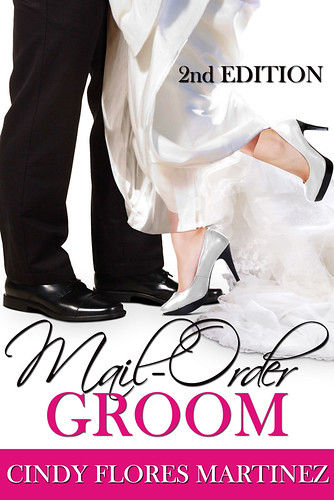 Blurb:
MAIL-ORDER GROOM (Second Edition), a sweet romance novel by Cindy Flores Martinez, is the story of an American woman who marries a stranger from Poland after her fiancé leaves her right before the wedding.

Lisa is about to marry the love of her life, but her world is shattered when she finds her fiancé, Jeff, in the arms of another woman. When he calls off the wedding, Lisa is heartbroken.

In a twist of fate, she meets Krzysztof Zielinski from Poland on Mail-Order-Grooms.Com. He needs to marry an American woman so that he can stay in America, and he’s willing to pay money for it. His reason for needing to stay is what tugs at Lisa’s heart and convinces her to say “I do” to him. After all, it’s going to be strictly a business deal.

Lisa races to the altar with her stand-in groom, but things become complicated when she finds herself falling for him, and he’s not planning to stay in America forever. Will Lisa’s heart break all over again?

My Cover Review:
There’s something fun about those covers which only show legs, it’s also a bit weird, but in general I like this trend. I like not seeing the main character their faces and leaving them up to the reader’s imagination. I like making their faces up in my head once I read the book. This cover also clearly mentions the genre and were this book it about. It conveyes where this story is about with only the legs of two people. It’s obvious he is a groom and she’s the bride and it’s about marriage in some form. And probably a romance and I would guess adult from the cover, which is all spot on if you read the blurb.

I like the simple use of colours, it only uses three main colours black, white and pink and I think it works. It’s a calm and simple cover, but it looks nice. My only issue with these leg covers is that they often look a bit photshopped if you look too closely. Like the bride her legs are in a slightly different direction than if she was really standing against him. And if you look closely, you notice her shoe isn’t on the floor and it seems she’s almost falling and almost goign to step on her dress.

To conclude: I think it’s a ncie cover, it displays were the book is about and leaves the faces to the imagination of the reader. The legs do look a bit photoshopped if you look closer. And I think the use of only three colours really works for this cover.

You can find Mail Order Groom on Goodreads

About the Author:
My name is Cindy Flores Martinez. I was born and raised in a suburb of Los Angeles. I have an MFA in Creative Writing with an emphasis in Screenwriting. I have been a screenwriting instructor, screenplay consultant, script reader, and screenplay collaborator. My novel, Mail-Order Groom, started out as a screenplay and movie project. I spent years shopping it around Hollywood, New York, and other parts of the world, and I had two well-known actors, one of them Academy Award nominated, interested in portraying the lead character’s parents. After not finding the success I wanted, I officially canceled my film production company in November of 2009 and embarked on the journey of turning my screenplay into a novel.

Have you read a book with the mail-order groom or mail-order bride plot and what did you think of it?