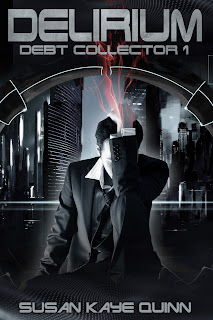 My jackboots are new, the latest ultra-light material out of Hong Kong’s synthetics district, and they make a strange squeaking sound against the hospital floor. It’s the kind of sound that might gather snickers or a raised eyebrow, but no one looks at me, at least not on purpose. I stroll past the ICU desk, taking my time, breathing in the antiseptic smell that masks the odor of death held back by machines and drugs and round-the-clock care. The nurses duck their heads and study their charts, ignoring me. As if catching my eye might mean I’m coming to collect their debt, rather than Mr. Henry’s in Room 301.
The floor is so highly polished that I see the reflection of my trenchcoat running ahead of me, black as a midnight grave, a spook that lives on the surface of the oft-scrubbed tiles. It reaches the door to 301 before me and disappears in the dim, flickering light coming from the room. The spook has gone back where he belongs, into the dark recesses of my soul, assuming I still have one. If I was a betting man, I would say the odds of having a soul keep getting longer with every transfer I do. The older debt collectors, the ones who are still alive, don’t have anything shining out of their dull-glass eyes, even when they’re hyped up on a transfer. There’s no telling what my eyes look like.
I stopped looking in the mirror a long time ago.
Mr. Henry’s hooked up in all the usual places—tubes in his arms and monitor patches hovering over his temples and the blue-veined skin of his chest. His knobbed knees and shriveled legs stick out the end of the blanket. I don’t know if he’s tossed the blanket aside or the nurses just forgot to cover him up again after his sponge bath or whatever they do to prepare patients for a debt transfer. Goosebumps raise the hair on what’s left of his legs into a small forest of gray fur. I tug the thin, white-weave blanket over his exposed legs, and Mr. Henry opens his eyes.
They’re pale green and watery—washed out and used up like the rest of him. 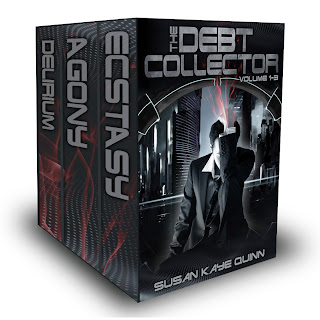 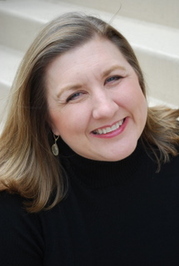 Susan Kaye Quinn grew up in California, where she wrote snippets of stories and passed them to her friends during class. Her teachers pretended not to notice and only confiscated her stories a couple times.

Susan Kaye Quinn is the author of the bestselling YA SF Mindjack series. Her new Debt Collector serial is her more grown-up SF that she likes to call future-noir. Her steampunk fantasy romance is temporarily on hold while she madly writes episodes to keep Lirium (the titular Debt Collector) happy. Plus she needs to leave time to play on Facebook. Susan has a lot of degrees in engineering, which come in handy when dreaming up dangerous mind powers, future dystopias, and slightly plausible steampunk inventions. Mostly she sits around in her pajamas in awe that she gets make stuff up full-time. You can find her at www.susankayequinn.com What’s your life worth on the open market? A debt collector can tell you precisely. Delirium (Debt Collector 1) is now available on Amazon, Barnes&Noble, Kobo, iTunes, Smashwords. See the Debt Collector website to check all the latest episode releases and goings on in the Debt Collector world.

And yes this awesome author has wroten a quest post for this book blitz!

Future-Noir or Why Retro Science Fiction is Awesomeby Susan Kaye Quinn author of the future-noir serial Debt Collector Apparently, I write strange science fiction. This comes up whenever I try to classify my stories to readers, bloggers, the lady at the checkout stand, my mother, or Amazon (who insists that I need a “category” in which to place my books; I insist I need about five). Apparently I write novels that mash together all kinds of genres in an indiscriminate cross-pollenation that would have Isaac Asimov turning in his grave… if he hadn’t done the same sort of thing himself as a young man (winking at you, Isaac!). Seriously, if you want to see a good bar brawl among literary types, just ask them what’s the genre of Hunger Games or Time Traveler’s Wife or any Nicolas Sparks novel, and watch the rhetoric fly! I personally have a very laizzez-faire approach toward genre definitions, which is sure to infuriate genre-disciplinarians. (I don’t mention my east-indian-influenced steampunk fantasy romance to genre-afficianados. I don’t want them to rupture something.) I figure the story comes first; people can decide what genre it is after it’s written. So no one was more surprised than me when I ended up writing a future-noir. On a long car ride, just me and my Muse… 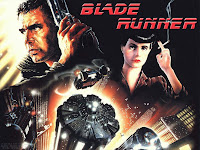 Muse: The Debt Collector.
Me: Er, what? Who are you?
Muse: When people’s debts exceed their future potential contributions to society, he cashes them out. Me: Whoa. Tell me more.
Muse: He extracts their life energy and transfers it to a “high potential” – someone who can use it to make greater contributions to the world.
Me: Holy… that’s a great idea.
Muse: He’s a good man with bad power. And it’s future-noir.
Me: Future-noir! Cool! Uh, what is that exactly?
Muse: Dark. Gritty. Futuristic but retro at the same time.
Me: Oh… like Blade Runner… Holy cats, this is awesome. Muse: You’re welcome. I ran (well, okay, drove) home and wrote the first episode. It was dark, gritty. Lots of low light, shady characters, set in a futuristic LA where the smog pooled at the impoverished feet of the city and the wealthy high-potentials lived above it all in the clean, clear air, taking their life-energy-hits courtesy of the titular Debt Collectors. The fashion was retro-sexy. The feel was future-dystopian. Did I mention it’s gritty? And dark? I send it off to my critique partner… 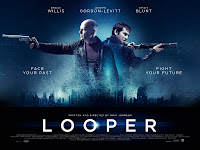 My Crit Partner: Hey, your new Debt Collector story reminds me of Looper!
Me: Well, it is future noir. *acts like I know what I’m talking about* My Crit Partner: Seriously. I totally see Lirium as a young Joseph Gordon-Levitt! And it totally reads like noir. You know, like Double Indemnity!
Me: Double what? That’s not one of those old black-n-white films, is it? My Crit Partner: All those noir films were black-n-white. 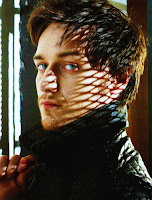 Me: Right! I knew that. (Sure.) Anyway, I think of Lirium more as James McAvoy in a trenchcoat.
My Crit Parnter: I can work with that. *we both drool on the picture* Wait, what was I saying? Right. Future-noir. Gritty retro feel – where the men wear trenchcoats and slick suits and the women wear bright red lipstick and carry a mini-revolver under their skirts – only it’s a futuristic story with time-travel (Looper) or berzerker androids (Blade Runner) or life-energy transfers (Debt Collector) that change the landscape. It’s raw. It’s sexy. It’s awesome. 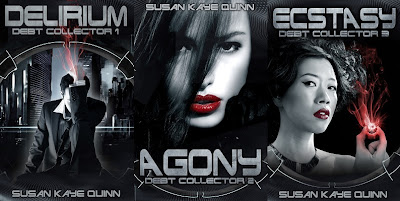 It looks something like this.
Nice Blogger Lady: What genre is that?
Me: Future-noir.
NBL: What’s future-noir?
Me: It’s a science fictiony, mystery type of story. Sort of a mix between urban fantasy and noir, with a thriller twist. There could be romance in there too. Like Blade Runner. Or Looper!
NBL: I’ll just call it science fiction.
Me: Works for me. 🙂

And I have an awesome giveaway for you! You can win a copy of Delirium, the first episode in the Debt Collector series. So what are you waiting for? Enter below for a chance to win:
a Rafflecopter giveaway