Today is my stop during the blog tour for Shattered Veil by Tracy Banghart. I am so glad I siggned-up to review this book, because I really enjoyed it and I can’t wait for the next book in this series. I’ll share my review with you today. 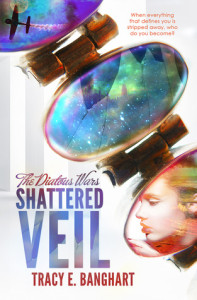 Blurb:
When everything that defines you is stripped away, who do you become?

War has come to Atalanta, infecting its quiet villages and lush woodlands, igniting whispered worries in its glittering capitol.

All across the dominion, young men are being Selected for Military and sent to the front lines…and eighteen-year-old Aris Haan’s childhood sweetheart is one of them.

Pyralis Nekkos, Atalanta’s leader, has kept the truth from his people, that their dominion will fall…and much sooner than anyone could guess.

Galena Vadim, his reluctant ally, wishes she could forget their shared past…until her future seems to depend on it.

And for the boy she loves, Aris, a talented wingjet pilot, will give up everything – her home, her name, even her face…

…only to become the key to her dominion’s survival.

I have read two other books by Tracy Banghart, so when I got the tour invite for Shattered Veil I immediately signed-up. When I received the ARC I couldn’t remember much of the blurb and for some reason believed it to be a fantasy book, I was pleasantly surprised when I found out it was a great dystopia book and I think this is Tracy her best book so far!

As soon as I started this book I was totally into the story, I easily read the first 50 pages in one sitting before I put down the book. The story had me intrigued from the start and I just had to know more. There is a lot happening and the pace is done well. I just wanted to keep reading, every time I picked it up I read a huge chunk of the story at once. It took me more than a week to read this book, but most of the reading was done in 3 sittings, because when I sat down to read I couldn’t put it down.

Aris is a great main character, she changes a lot in this book and there is so much character development. I would like to say she also grew stronger, but when I think about I think she always was strong already, she just had to find her strenght again. Aris is a great main character and she gives up almost everything and then realizes she is fighting for something else entirely. I really liked Aris as a main character, in the beginning she was a bit naïve, but that quikcly changed. From the side characters I have to say Dysis is my favourite, she is Aris her roommate at the military and I really liked her. I hoped we get to see more of her in the next book too.

The world that Tracy creates in this book is really interesting. Although sometimes it felt more like fantasy book than a dystopia, because it was difficult to connect the world in this book with the current world. Also I would’ve liked to see a map of the world, because even though it was described where the countries where it was still a bit difficult to visualize and know where the countries really where. Also in general I would’ve liked to get just a little more world building, while reading the story this didn’t bother me, but when thinking about it I realize there is so much that isn’t explained. The story is just so much the focus of this book I hardly realized there wasn’t much world building.

There are some questions about the world and how it changed and why that just didn’t seem to get explained really well. Also it was difficult to get a good idea of how much years in the future it was and which technological advances had taken place. Also one thing I kept wondering about is why the women in the military where never discovered, it just seemed like they would’ve been discovered earlier before this. It’s too big a thing to stay hidden for long and their names didn’t change that much, if someone really looked into it, they would’ve find it out.

To conclude: I really enjoyed Shattered Veil, every time I picked it up I didn’t want to stop reading. I really like Tracy her writing style and I think Shattered Veil is my favourite book of her so far. The story is interesting and Aris is a great main character. There are some questions about the world that wished would’ve been answered better, but all in all I really enjoyed this book and I can’t wait to read the next book in this series!

Tracy E. Banghart is a cheesy movie–loving, fantasy football–playing (go Ravens!), globe-trotting Army wife who began “practicing” her craft at the age of five, when she wrote her first story. She loves visiting the international friends she met while pursuing her MA in Publishing and spends a portion of every summer at her family’s cabin in Canada, where she finds inspiration and lots of time to relax on the dock. She lives with her husband, son, two lazy dogs and one ornery cat. When not writing or spending time with her family, she is on a mission to bake the perfect cupcake.