Today is my tour stop during the blog tour for Dragons Are People, Too by Sarah Nicolas. I share my review of this book with you and there’s a tour wide giveaway. You can check out the tour schedule here. 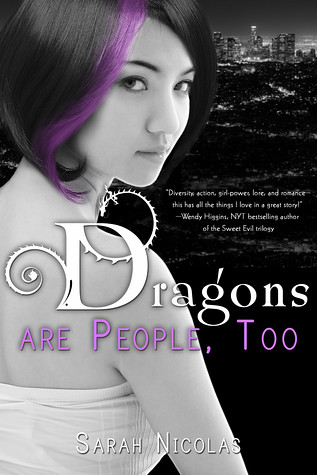 Dragon Are People, Too
by Sarah Nicolas

Blurb:
Never judge a dragon
by her human cover…

Sixteen-year-old Kitty Lung has everyone convinced she’s a normal teen—not a secret government operative, not the one charged with protecting the president’s son, and certainly not a were-dragon. The only one she trusts with the truth is her best friend—and secret crush—the über-hot Bulisani Mathe.

Then a junior operative breaks Rule Number One by changing into his dragon form in public—on Kitty’s watch—and suddenly, the world knows. About dragons. About the Draconic Intelligence Command (DIC) Kitty works for. About Kitty herself.

Now the government is hunting down and incarcerating dragons to stop a public panic, and a new shape-shifting enemy has kidnapped the president’s son. Kitty and Bulisani are the last free dragons, wanted by both their allies and their enemies. If they can’t rescue the president’s son and liberate their fellow dragons before getting caught themselves, dragons might never live free again.

I love books about shapeshifters and haven’t read a lot of dragon shapeshifter books yet, so when I heard about this book I jumped on the chance to read and review this book. It’s a fun and original book about dragon shapeshifters with diverse characters. I had some issues with this book, but overall I enjoyed it. My biggest issue was that while the beginning is spectacular, after that it loses a bit of the pace and power. The beginning was so good, that after that it just felt a bit slow, but that might also be partly due to the fact I couldn’t read for long periods of time as this was my breakfast book. It just felt like it started with a bang and then sort of sizzled on.

Dragons Are People, Too follows Kitty. She has been trained as a spy and her current mission is to protect the son of the president named Jacob. Then there’s the boy Sani with whom she’s secretly in love. Her whole world is turned upside down as due to an accidental shift of someone under her command dragons are revealed to the general public and all hell breaks lose. The story is filled with action and there are some really cool action scenes involving Kitty in her dragon form.

Also there is this twist with all the dragons being captured except for Kitty and Sani, which seemed a bit too convenient. I assumed there are still a lot of dragons in total and it just seemed weird all of them got captured, even with the explanation that sort of made sense. And ofcourse the two of them still manage pretty well and avoid escape. I also would’ve liked a bit more normalcy, now the focus was constantly on guns and action, trying to free people, trying to infiltrate buildings and regrouping and making new plans. There’s also a scene with a super computer that made me wonder in which time it takes place.

I liked Kitty, she is a bit stubborn and hasty to jump into the action sometimes, but she has her heart on the right place and she’s focussed on the goal and mission. I did think she made a few hasty decisions at times, but if you count in that she is only a teenager I think she did pretty well with all the responsibility. There is also a part at the end where I wanted to scream at her to go after a certain person as I am sure now that decision is coming back to bite her in the next book. Sani the love interest was someone who could easily keep his cool and he was the perfect partner for Kitty. They make a great duo and work well together.

The romance is done well, it’s a bit slow at first, but for a good reason as they are busy trying to save some people and trying to stay alive. I could appreciate how they didn’t start kissing in the middle of an action scene, but there were all these little touches after the action scenes from which you noticed they liked each other and really cared and knew each other. There is a scene were sani buys something for Kitty and it was so sweet as he knew exactly what she needed to relax at that moment. They wait till they are on a save place before the romance comes out.

The world building isn’t as elaborate as I would’ve wished, but I did like it. There are 3 different types of dragons to account for the different ways dragons are depicted, like the Asian and English dragons. Although I had some trouble imagining the African dragons as they looked more like a panther in my head and I am not sure what part of them is dragonish. Also the whole explanation attempt at how they could shift instantly and keep al their clothes and things on was a bit icky, but that’s just me. I prefer shifts that actually take time and their own body shifts, although the instant shift did make for some really cool moves in the action scenes. Also I just would’ve liked a bit more depth to the world building and insight in how the dragons lived. Also is it just me or is the other supernatural we meet in this book seriously overpowered?

I also would’ve loved to see the actual reactions of the public after their world is upside down due to the revelation that dragons exist, now it just seemed to focus on Kitty her mission to free the dragons and Jacob instead of the bigger picture. But the thing that attracted me to this book was that it dealt with dragons suddenly made public and there is actually very little focus on that.

To conclude: I enjoyed this book, but the great beginning made the rest of the book seem somehow less enjoyable. I liked the characters and thought Kitty and Sani made a good team. the romance was present, but didn’t overtake the plot. The world building was a bit meh, the concept was cool, but I would’ve liked a bit more punch behind it. It just felt a bit flat and I was a bit disappointed there wasn’t more focus on the aftermath and how the world reacts to dragons existing.

You can add Dragon’s Are People, Too to your to-read list on Goodreads

There is a tour wide giveaway for this blog tour, check out what you can win and enter the giveaway below:
a Rafflecopter giveaway

Have you read a book about dragon shapeshifters?

12 responses to “Blog Tour: Dragons Are People, Too by Sarah Nicolas”