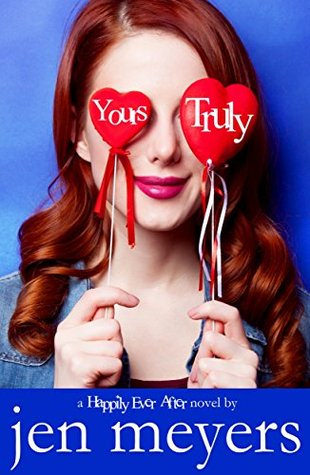 Yours Truly (Happily Ever After #2)
by Jen Meyers

Blurb:
Willow Truly doesn’t need a man. Never has, never will. At least, not in the long-term. She’s as keen for a roll in the sack as the next girl, but beyond that, a man’s usefulness runs out quick.

A girl’s got to take care of herself, Will’s learned, because as soon as you start to rely on a man, he breaks your heart. She’s bound and determined to never let THAT happen again, so she’s sworn off love, marriage, and living happily ever after. As the writer of a snarky dating column in Du Jour magazine, she’s pretty much guaranteed no man will stick around for long…and she’s totally okay with that.

Unless, of course, we’re talking about Josh. Her all-around favorite guy and best friend outside of The Girls, Josh is the only man Will can’t date. Not if she wants to keep him in her life—and she does. More than anything.

However, to keep him, Will may have to go against everything she believes to be true and take a chance on love again. And on Josh. Because if she doesn’t…Will just may break her own heart.

Wow this book reminds me why I enjoy Jen Meyers her books so much. This book was so good! I enjoyed it from the first page till the last and about the halfway mark there was this part where I just wanted to keep reading and I almost rushed through it as I couldn’t stop reading. This series follows a group of friend as each of them finds their happily ever after and it’s a lot of fun so far. The way the author describes this group of friends while also focusing on one romance at a time is great.

This book follows Will Truly, when the previous book ended she was the one’s who’s story I wanted to read next and I was so happy so see Will her story would be book 2. Will is a writer, she writes a column and romance books, but doesn’t believe in a happily ever after for herself. Instead she dates man who are all wrong for her and turn those fails into funny columns. She wouldn’t settle for a man who wasn’t good for her, but on the other hand also didn’t go for the men who were good for her. I really enjoyed how we got snippets of her writing, not a lot, but a few and it worked well. I really felt that she was a writer and it didn’t feel weird or overdone at all. In fact it felt very realistic and natural.

I thought Will was an interesting character, she loves those close to her strongly and I think that’s why she finds it so hard to open her heart to anyone as she can’t bear the thought of losing them. She’s very vulnerable as well and I liked that contradiction. She believes she doesn’t need a man in her life and is very independent. And seeing her slowly fall in love was great. There are some emotional scenes in this book, but overall it has a light feel and it’s also a wonderful love story. And the conflict felt realistic and in character, I can’t emphasize how much I like that. Although I did felt it got resolved a bit too easily. And I wouldn’t have minded if we had seen a few more chapters of Josh and Will as I just enjoyed their story so much and wanted more.

Then there is the romance, which is so well written. It’s exactly the type of romance I like, where you just know these two characters are perfect for each other. It’s a friend to lovers type of romance, one of my favourite tropes. And Josh is almost perfect, maybe a bit too perfect at times. He’s in love with Will and isn’t quite sure how to tell her that as she only sees him as a friend. But there are these scenes that are so heartfelt, where he is there for her and shows how completely he knows her. he gives and helps Will a few times and he just gave the perfect gift. Not traditionally perfect, but perfect for Will and I loved that.

Then there is the group of friends, we see them in multiple scenes where Will interacts with them and they text a lot. It’s great seeing these as a group, although it was a bit strange to see Ever (main characters from book 1) from Will her point of view now as she felt a bit different somehow, not sure why. I really like how these characters are so close and seeing them be there for each other and how close they are is great. And it’s fun seeing the other side characters their lives evolve even though you don’t get all the details. And I am so excited we’re getting Bliss her book next. There are a few hints that set-up the basis for the next story and it makes me curious to see Bliss her story. There’s also a scene with Will and Harmony that was very touching.

To summarize: I really enjoyed this romance book. It has such a well written romance with two characters who know each other so well and are perfect for each other. It just takes them some time to realize it. There are some emotional and touching scenes in this book. I love how Jen Meyers writes romance as they grab me form page one and I don’t want to stop reading. Will is a great main character and I enjoyed reading about her with how she was afraid to lose people and only dated man who were all wrong for her. I also liked she was a writer and how that was handled in the book. Her friends to lover romance with Josh was so awesome to read about it and I really liked these tow together. They really know each other and I felt like their romance was realistically written, even the conflict. Although I did think the conflict got solved a bit too easily. This was a great book and I am already looking forward to the next book and the next member of this awesome group of friends who will find her happily ever after.

What’s the last romance book you read and enjoyed?

12 responses to “Review: Yours Truly by Jen Meyers”