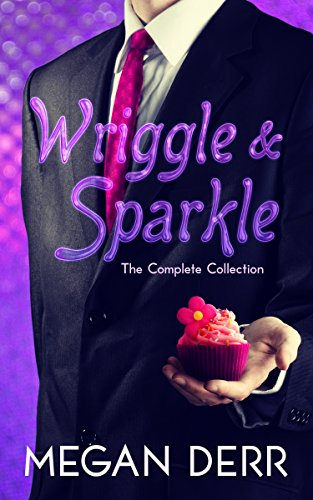 Blurb:
Lynn is a kraken shifter in every way: detailed, tenacious, resilient, and hard-working. Also possessive, vain, arrogant, and demanding. It makes him an excellent agent for the Federal Bureau of Paranormal Security and Investigation—and impossible to work with, as the long list of partners who have transferred away from him will attest.

His newest partner is a unicorn, possibly the worst type of paranormal for work that often turns ugly and violent. Everyone knows unicorns are too delicate for such things. Then Anderson proves to be a unicorn like no other, the kind of partner Lynn has always wanted—the kind of partner he wishes was more. But if there’s one thing he’s learned, it’s that the only thing harder to keep than a partner is a lover.

My Review:
I picked up Wriggle & Sparkle after a recommendation from one of my blogger friends as I wanted to read more MM romance. And I am glad I picked this one up. Wriggle & Sparkle was a fun read, the way it’s written, some of the situations, it was just a whole lot of fun. It was a very well done romance and for that it could’ve easily gotten a 4 star. But parts of the story didn’t quite work for me and while I enjoyed the book when I was reading, I never was really in a hurry to get back to it. I am not quite sure why, but that prevented me from giving this a 4 star, but it’s a 3 star on the higher end of that rating for sure.

Wriggle & Sparkle is one book, but it actually consist of multiple short stories. And on the one hand that works perfect for this book and on the other hand the short stories also meant that each plot line of the stories was wrapped up quite quickly. Each story has a bit of a paranormal investigation/ mystery plot line involving something paranormal going on. And because of the shorter length it felt like these investigations got wrapped up a bit too quickly each time. There were some great moments for big reveals, but as we never get as much time to full get into the mystery they lacked impact. The build-up and progression of these plot lines just went relatively fast and it was hard to full care about it or get fully sucked into what was going on.

Another slight niggle is the lack of stop points this book had, I like to stop at a break or chapter ending when possible and each short story only had a few stops points. It was hard to find a good point to stop and I often had to put the book down in a middle of a scene. I know it’s not a big deal, but it’s still something I noticed.

There were some scenes I enjoyed more than others and also some short stories I enjoyed more than others. I think it was the second story that had a lot of drama, didn’t quite work for me. I didn’t really care for the miscommunication and while it did feel in character, it also felt like a bit much. They are doing some stupid things in that story, going on a dangerous mission not only being angry with each other, but overly tired as well. It just seemed like a recipe for disaster.

But there are also parts I really enjoyed, there is a small quarrel later on that was quite well done actually and felt even more in character. And I loved not only seeing their relationship progress throughout the book, but also how their personal and professional lives changed. That definitely was one of my favorite parts of this type of set-up. The short stories all are in chronological order and there are some time skips in between so we get a good feel for how everything progresses in their lives over a longer period of time.

This is one of those books that only seem to get better as the story progresses. At first I already enjoyed the story, but the writing felt a bit more polished and the story even more fun as the book progressed. In the first two stories or so it also felt like there was an overabundance of cuss words, which normally I don’t even notice, but here it just seemed a bit overdone. But as the book progressed that went away again.

Wriggle & Sparkle follows Lynn, a Karen shifter, and Anderson, an unicorn shifter. They might seem like an unlikeable pairing, but they are great together. Lynn is a bit of a perfectionist. He dresses up in nice suits and often gets annoyed when others don’t do things like he wants them to. At fist I thought his behavior was a tad annoying, but as the story progresses I thought this was better done and it felt in character and fit his personality. He is just a bit picky and arrogant, but it all made him into an interesting character. The description in the blurb is pretty spot on for him.

Then there is Anderson who isn’t like most unicorn, he likes sex a lot and has a bunch of exes and an ex or two pops up in almost every story. He also has a bit of temper, but in a very different way than Lynn. He stands up for what believes in and isn’t afraid to share his opinion. I also liked how he had a bit of a sweet tooth.

I really like the romance in this book and that was probably my favorite part of this story. Lynn and Anderson were just so perfect and cute together. I did think the romance progressed a bit quickly, they hardly know each other and before the end of the first short story they already land in bed together, or pool as the case might be. But at the same time the fast progression of the romance didn’t bother me too much as with the way this story was set-up with multiple short stories it was great to see their relationship improve over the course of the book. And so many books end when the couple get together it was refreshing to read about a couple after they get together and see how their lives progress after they become a couple.

There is quite a lot of heat in this book, every short story has at least one sex scene and many of them more than one. But it wasn’t too much in my opinion, it was nicely balanced out with the other things going on in this book. And I liked reading about these two and how well they fit together. And while they have some hot sex, my favorite parts are probably the sweet scenes. How Lynn always was bringing Anderson sweets and he has an awesome birthday gift for him too. And in a later story Anderson buys this thing that’s perfect for Lynn. They just were so cute together and the epilogue was so sweet and gave me all these happy feeling seeing how they ended up.

This book is pretty limited when it comes to the world building, but for most of the book it didn’t really felt like it was lacking as the book didn’t really need much world building, but I still would’ve liked a bit more. In this book a lot of paranormal/ supernatural creatures are real and they can all shift into human forms, there are some stereotypes surrounding most creatures and there are a lot of references to their supernatural type. And a lot of kraken/ unicorn mentions and jokes when it comes to the main characters, but instead of overdone, it was quite fun and added to the book.

There was a nice and original touch about how the shifters had to use rings, which I liked. It was something different and we get a bit of a feel how it works. It also was fun how there were a bunch of less common paranormal creatures that played a role. Although I would’ve liked a bit more world building, see the world come alive a bit more. And while the supernaturals did seem to be secret, some things did make me wonder how careful they really were and a few scenes were they seemed a bit too open or not as careful with the shifting. Although most of the time they are in human form actually. There also seemed some people who were aware of the supernatural world, but I wasn’t quite sure how it all worked.

And I also had no clue were this book took place, I think the US, but only in the last two stories there was a mention of countries at all. I just knew they worked in the city and Anderson’s family lived in another city. It wasn’t really lacking as it wasn’t as relevant for the plot and the story was easy to follow without that information. But I wouldn’t have minded if a few of those things would’ve been clarified a bit more of expanded on a bit.

To summarize: This was such a fun read featuring a kraken an unicorn shifter, who made for such a cute couple. The book consist of multiple short stories in chronological order, featuring these two characters. The set-up worked well for this book and I loved seeing their romance, personal and professional lives change as the book progressed. Although the shorter length of each individual story did make the investigating/ mystery plot line in each story go a bit fast and they lacked a bit of impact because of that. And while it was a fun read and I enjoyed it, I didn’t got as sucked into the story was I would’ve liked. The romance was my favorite part, Lynn and Anderson were great to read about and I loved how good they were together. There is a bunch of sex scenes, but also so many sweet scenes. And it was just so fun to read about these two. The world building is a bit limited, but at the same time it also wasn’t really lacking, I just would’ve liked a bit more explanation or seen some things expanded a bit.

Tell me about some of the most unique shifter types you read about?