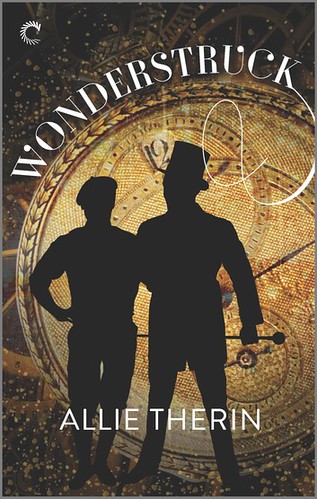 Arthur Kenzie is on a mission: to destroy the powerful supernatural relic that threatens Manhattan—and all the nonmagical minds in the world. So far his search has been fruitless. All it has done is keep him from the man he loves. But he’ll do anything to keep Rory safe and free, even if that means leaving him behind.

Psychometric Rory Brodigan knows his uncontrolled magic is a liability, but he’s determined to gain power over it. He can take care of himself—and maybe even Arthur, too, if Arthur will let him. An auction at the Paris world’s fair offers the perfect opportunity to destroy the relic, if a group of power-hungry supernaturals don’t destroy Rory and Arthur first.

As the magical world converges on Paris, Arthur and Rory have to decide who they can trust. Guessing wrong could spell destruction for their bond—and for the world as they know it.

I was so excited for book 3 in this series. I really enjoyed the first 2 books and when I hit a slump I knew just the book to get me out of it… sadly it didn’t work. I struggled through the first half of this book, sad that I wasn’t enjoying it. I eventually decided to take a break, read something in between and then return. My mood was a lot better after that and I enjoyed the second half more, but Unfortunately I didn’t enjoy this one as much as the first 2 books. It’s a solid read, it just was missing something for me that the first two books did have.

So in Wonderstruck Arthur and Rory are on a quest to destroy the dangerous relic they got their hands on in book 2. More accurately Arthur is doing that while Rory is stuck in New York. I thought the book had quite the slow start, they’re trying different things to destroy the relic and for a long time it feels like they’re not getting anywhere. It also feels like the stakes aren’t as high, they’re preventing a possible bad future, but there’s nothing really going on right now. More importantly I didn’t really feel the urgency and danger. The pacing felt a bit weird, with some parts being slow and then others almost feeling rushed.

Things pick up once they go to England and I was curious to see what happened next, while I enjoyed the second half a bit more, it never fully pulled me in as much as I would’ve liked. At times I would’ve liked to see a bit more of the characters, it feels very plot focused at times, but not in an engaging way. It’s hard to explain exactly what about this book didn’t quite work for me.

The ending is great and I liked how it wrapped up the main plot line while still leaving things a bit open. I personally would’ve liked to see a bit more closure about what happens next, but that’s mostly because I rather have the author fill in the blanks than that I have to do that myself.

There are some awesome bonding scenes between Arthur and Rory later on in the story. The definitely have some bump to overcome first tough. I was a bit disappointed they go through some of the same issues as in the previous books. It felt realistic sure, but it was wasn’t as interesting to me to read. It just felt like repeating some of those same conversations again. I do like these two together. They made for a great couple and it’s clear they care about the other a lot and a lot of their troubles come from caring too much.

There is a big show down scene at the end, but it didn’t feel as strong as those in previous books and I didn’t really care for a certain power that a bad guy had, it just felt too convenient. There is a nice twist along the way and I am glad with how some things got resolved, it just seemed to lack that little something that really pulls the story to the next level for me.

To summarize: I really enjoy this series and would definitely recommend it. While I really enjoyed books 1 and 2, this one fell a bit flat for me. The pacing didn’t feel as well done, with parts feeling pretty slow and others almost rushed. The first half really was a struggle for me to get through. Things are going on, but it’s mostly preventing a future disaster and there is nothing really going right now. There are plenty of attempts, but it feels like they’re not getting anywhere. After I took a break from this book I returned and enjoyed the second half more, there are some interesting developments and I liked the romance. I like Arthur and Rory as a couple and there are some great scenes between them, although I didn’t really care for how they went over some of the same issues as in previous books again. It was realistic, just not as interesting to me. I also would’ve liked to see a bit more of the side characters in this one. Sadly this one didn’t fully work for me, but the series as a whole is a great one and this one brings a good resolution to the main plot lines.