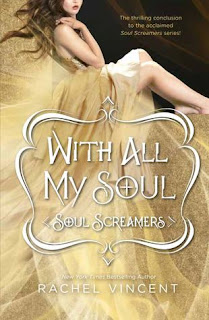 With All My Soul (Soul Screamers #7)
by Rachel Vincent

Blurb: What does it mean when your school is voted the most dangerous in America? It’s time to kick some hellion butt…

After not really surviving her junior year (does “undead” count as survival?), Kaylee Cavanaugh has vowed to take back her school from the hellions causing all the trouble. She’s going to find a way to turn the incarnations of Avarice, Envy and Vanity against one another in order to protect her friends and finish this war, once and forever.

But then she meets Wrath and understands that she’s closer to the edge than she’s ever been. And when one more person close to her is taken, Kaylee realizes she can’t save everyone she loves without risking everything she has….

My review:
This is going to be a difficult review to write. Let me start by saying that since the first book I really enjoyed the Soul Screamers series. I think If I Die is the best book of the series and the two books afterwards just weren’t that good. With All My Soul was a great ending to this series, but overall this only an okay book.

The story is just more of the same and I have to admit it was a bit boring for most of the book. There were some interested scenes that I liked and some surprises, but it didn’t have that keep-reading-feel. I could put this book down too easily. Although I have to say I still love Rachel Vincent’s writing style and will probably still read everything she writes. The writing style is great and what kept me reading even when I wasn’t that interested in the story. Also I just had to know how it all ends. I did like seeing how the characters went on with their lives after what happened in the end of book 6, because some stuff happened and I had no idea how they would continue onwards.

The best part of this book are the last 16 pages, the ending is emotional and brilliant and also still full of questions and some plot holes. I think this series is wrapped up really well and the ending was done really good, but I also didn’t like some of the events that happened at the end, because some things are just contradicting each other and as mentioned earlier there are still some plot holes and explanations that don’t make that much sense. And the explanation stuff was a bit confusing at times. The ending did leave me feeling good and I liked how it ended.

The characters do change in this book. I actualy started to like Kaylee a little less in this book, there are just a few things she says and does that I didn’t like or agree with and sometimes she just couldn’t see the perspectives of everyone else and it felt like she didn’t take those in consideration at some moments. Emma on the other hand grew stronger in this book, certainly after what happened in the last book I was amazed at how she dealt with everything in this book and I think she became an even more awesome character in this book. I also liked how Sophie developed in this whole series and actually ended up as a decent character. And how in the end I really like Sabine and I think she is a great character, even though she did some bad things and was pretty unlikeable when she was first introduced. There are also some great developments between some of the characters and I liked where they all ended up at the end of the book.

There isn’t much world building added in this book, but now most of the world building already has been established and I even thought that the descriptions of the Netherworld were less vivid than in the earlier books.

To conclude: I just have some mixed feelings about this book. I was a bit bored for most of the book and I actually had enough of Avari and all his evil plans. I did like the writing style. I also liked the ending and what happened to the characters at the end. I think this book concludes the series well, but I didn’t like some of the events that happened and I think there are still some plot holes in the story. I also liked Kaylee a little less in this book because of some of the things she did. I did liked Emma more because she showed so much strenght in this book.