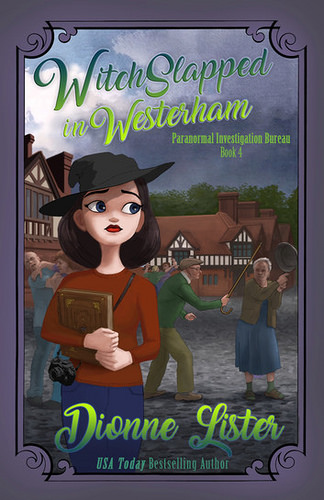 When violent crime increases in Westerham, Lily and the PIB agents have to step in to sort things out. But nothing is quite as it seems, and danger lurks in every shadow.

Just when Lily thinks she can figure things out, everyone turns against her, including those she loves most. It doesn’t help that the person instigating the hate is one of the most powerful witches at the PIB—the love of Will’s life: Dana.

Can Lily use her magic to get to the source of the violence before things escalate to the point of no return? And will her friends see the truth about Dana, or will Lily lose them forever?

I bought Witchslapped in Westerham on release day and it didn’t take long before I started reading it. It’s another fun adventure filled with magic where we follow Lily. The stakes are upped even higher in this book as the troubles in the PIB come to a head and there’s a big increase in violent crimes in Westerham. Lily has her hands full and has to learn as much magic as she can as fast as she can to solve this.

This time the mystery is focused on the violent crimes in Westerham and what caused them. And the PIB is in disarray and can hardly keep up with the work, so Lily takes it upon herself to help figure this out. There is even more going on with the PIB, the tensions for which have been building since the last book already and those also hit now.

And while it’s another fun read, I have to say this is my least favorite book in the series so far. I think that mostly has to do with the actual nature of the crimes. The whole violent crimes thing, just wasn’t interesting. Sure it was creepy, but it wasn’t as interesting to me. It also seemed the kind of crime you just can’t get away with, just because of how visible it is. It just didn’t seem smart. Same goes with the villain in the PIB, who is not only overpowered, but she also behaves a bit like a bully. I just didn’t find her interesting.

I also thought the powers of the villain seemed too strong compared to what we know about the world so far. There is a thing that explains it eventually, but it just felt like it came out of nowhere as I don’t think we heard about this thing before. I also didn’t like her kind of power. It just didn’t fully work for me. And the event at the end where something happens, it again seemed too convenient. That person was a trained agent and he should’ve known better.

I do like how at the end they uncover a big clue toward the mystery of who is after Lily and what happened to their parents. Tat plot line has been very slowly progressing a bit with each book and it felt good to have them find this big clue and be a step closer to figuring it out. I am actually quite curious how this plot line will progress throughout the rest of the series.

One of my favorite parts of this book was seeing how Lily managed her magic, her powers grow a lot and she becomes more capable when it comes to spells. She is using magic a lot more for both important and mundane things and she really focuses on getting better, which was great to see. This book also really illustrates how special some of her powers are. Her photography skill isn’t used as much in this book, but it is very important again.

There also is a bit of progression in the romance, but it felt too sudden and too much. I was happy with how parts of it were handled as it seems they’re easing into it. I just didn’t feel much of the build up, so it’s hard to fully care about the romance now.

To summarize: Another fun mystery with Lily and her friends. While not my favorite book in this series it was still a good read and I had fun reading it. I wasn’t fully pulled in by this time’s mystery. The violent crimes increase seemed too big of a thing and lacked suspense or subtlety which was more present in the previous books. I also didn’t care about the villain, she just didn’t seem interesting and with her powers I couldn’t believe there weren’t more restrictions on her. She seemed a bit too overpowered, although that does get explained later on. I liked how Lily got better with magic in this book and worked a lot on her magic and improving and how once again her photography skill was important to solve the mystery. There also is a big clue for the plot line that continues throughout the series and I am curious how that will progress.

6 responses to “Review: Witchslapped in Westerham by Dionne Lister”