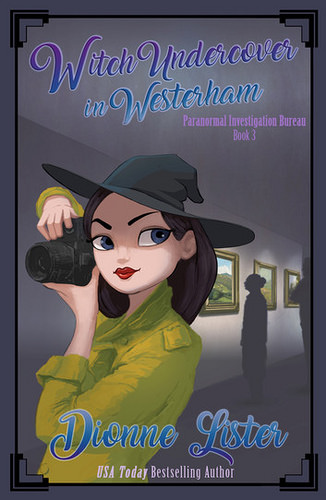 Blurb:
Deciding to have more fun in Westerham, Lily takes up life-drawing classes with her friend Olivia. But trouble isn’t far away; the art teacher goes missing after the second class.

Tracking down the art teacher is proving impossible, and the PIB’s best lead is murdered before they can find out everything he knows. Yet again, Lily’s unique witchy skills are called upon to help. The problem? It’s dangerous for her to reveal her talents. She’s already the target of a secret organisation intent on kidnapping her, and now those closest to her fear a threat inside the PIB itself.

To help solve the case, Lily makes a dangerous choice: to go undercover with no backup. But has she just made a fatal mistake?

So much for witches having it easier. Someone pass Lily a cappuccino, but this time, make it a double.

After book 2 I started right with book 3. I am having a lot of fun with this series and this is another great read in this series. This one had a great mystery, a bit more like most cozy mysteries, but still with some great twists. I also like seeing Lily trying to find her way with being a witch and she helps out with this investigation by going undercover.

In this book Lily is taking art lessons, when the teacher goes missing, she and her witch friends start to investigate. I really liked this mystery, first there is the mystery of what happened to the art teacher and why. Is she still alive or not and why did she disappear? There are a bunch of possible suspects, but it takes a while before the pieces come together and was kept guessing for a long time and only once Lily makes an observation it all falls on it’s place. There are some unexpected twists. It is quite the sad mystery, especially when everything comes to light. And there’s a scene that made me quite sad. But the mystery was quite intriguing altogether and I liked how it was different from the previous ones.

Lily is still a great character to follow, she is learning new spells and magic in this book, which was great to see. But also gets into trouble sometimes and I felt for her when one of her spells had an unintended side effect as she didn’t fully understand what she was doing or how to stop it. The whole familiar thing was quite intriguing as Lily meets another witch’s familiar in this book and I hope she might get her own familiar later on in the series. Her photography is again an important part of the plot and I like her photography powers.

I still can’t make myself care about the romance sadly. I am trying but I just don’t feel the romance. I don’t get what Lily sees in William and I think there isn’t one scene in this book were he was nice to her. He was either ignoring her or being rude. I had hoped to have some sweet or touching scenes between her and William, but there isn’t any of that. Then there is a bit of added drama with William’s ex showing up, who is a bit mean to Lily and Lily trying to move on by going on a date with someone else and it just didn’t work for me. The romance is my least favorite part of this series, but luckily it’s only a small part.

There is a bit of continuing mystery going on about what happened to Lily’s parents and this book only gives a few pretty small pieces in tat regard. And there’s the plot line about what’s going on in the PIB, which got quite a bit of attention in this one. The tensions in the company are obvious and I am not fully sure yet what’s going on there but it will be interesting to see how that plays out.

To summarize: I had fun reading this book. It continues to be a great series and I am looking forward to book 4. The mystery was a good one and kept me guessing, with some unexpected twists. It was a bit more sad at places than I had expected, but it did make sense. I enjoy following Lily as she is trying to get a handle on her new powers. The romance slowly continues as well, in this book Lily tries to get over William by going on a date with someone else and William’s ex returns, who is quite mean to Lily. I don’t really care about the romance, but luckily it’s only a small part. There are also some ongoing mysteries that continue throughout the series, which are quite interesting too.

Tell me about a new series you discovered this year?

10 responses to “Review: Witch Undercover in Westerham by Dionne Lister”