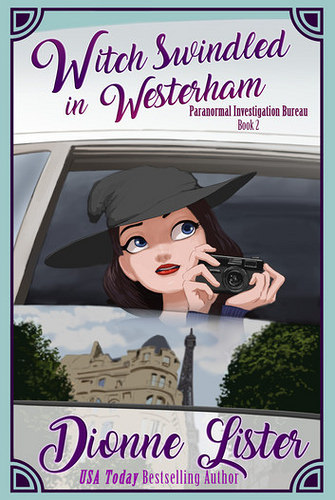 Blurb:
Just when Lily’s settling into life in Westerham and making new friends, the Paranormal Investigation Bureau needs her help again. A witch has been misappropriating millions from unsuspecting retirees, but she’s destroyed all the evidence. Lily’s unique witchy skills are the only thing that can uncover the past and get the PIB the evidence it needs.

Lily has her own plans, but nothing seems to go right. Her fun day in London turns into a devastating collision with her past, and super-hot Agent Crankypants is annoying as hell. He knows all her buttons to press, and she’s not sure if she wants to kiss him or strangle him, or maybe both. Then tracking down the PIB’s suspect puts Lily’s new friendship at risk, and, if that’s not enough, it finally brings Lily face-to-face with death.

Can Lily solve the crime before someone dies? And will the universe give her a break before she loses what’s left of her sanity?
Unfortunately, coffee alone can’t fix things this time.

After reading the first book in this series I dove right into book 2. I seem to really get into the whole binge reading this year strangely enough as I never used to binge read series. Witch Swindled in Westerham was just as fun as book 1 and I liked seeing more of Lily and her friends as they have another case to solve.

I like the unique set-up these stories have. Unlike most cozy mysteries there actually isn’t a murder in this book. This story deals with a witch who is swindling people and Lily is called in to help get enough evidence to put this witch behind bars and figure out more about the swindling. So from the start you already know who is behind this, the mystery more deals with figuring out the details and evidence. Which really works in these books. I enjoy seeing the whole picture slowly come together over the course of the book. While there isn’t a big mystery to figure out, there are still enough questions that need to be answered and I enjoy seeing how Lily and the rest deal with it and figure things out.

Lily now lives in England and there is a bit of a sightseeing in the UK as well as a trip to Paris and more magic ofcourse. I like how Lily still is a newbie when it comes to magic, it’s refreshing how she doesn’t immediately learn everything or get very good at magic as soon. But at the same time it’s also clear she is improving and working to learn more, there are new spells she learns in this book and her magic improves. I quite like Lily and her photography is again an important part of the story.

The hint of romance turns into a bit more in this book, but I am not fully warmed up to it. I don’t really care for the outward bickering or acting like they don’t like each other thing while in fact they do like each other. I actually like Beren a lot more, but Lily doesn’t have quite the same spark for him as she does for William sadly.

We also see a bit more of Lily’s brother and her mentor Angelica. And Lily her friendship with Olivia is an important part of the book as well and Olivia actually has a tie to the mystery. There’s an interesting development at the end of the book as well. And a few hints about Lily’s parents disappearance which I think we’ll hear more about later in this series.

I like how the witchy world comes alive a bit more in this book and how Lily slowly learns more about magic and she adds some new spells to her repertoire in this book.

To summarize: Another fun read in this series. This book follows Lily as she tries to help uncover the details and evidence about a witch who is swindling customers. It takes some time for the whole picture to become clear over the course of the book, which is great. Lily is a great character to follow, she makes a few mistakes along the way, but also feels sorry about them. I like how her photography keeps playing a part and how her magic improves, but she is still clearly a newbie. the romance becomes a bit more clearer in this book, but I am not fully warmed up to it yet. All in all this was another fun book in this series.

What ‘s your favorite thing about witches?

10 responses to “Review: Witch Swindled in Westerham by Dionne Lister”