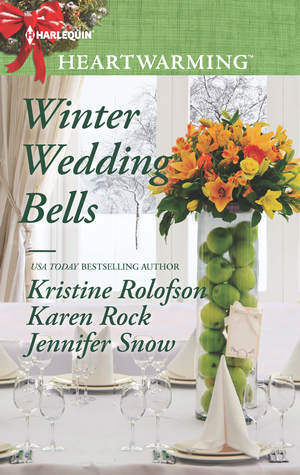 Blurb:
But guests are expecting a Christmas Eve wedding…!

What could be more romantic than a Christmas wedding at a ski lodge in Lake Placid? Well, if there actually was a wedding, for one thing! Three stories about getting love right over the holidays by USA TODAY bestselling author Kristine Rolofson and award-winners Karen Rock and Jennifer Snow.

The Kiss: A bride runs into her ex…and takes the ultimate gamble!

The Wish: An event planner sprains her ankle…and the chef asserts control.

The Promise: A maid of honor dodges an ex-boyfriend out to right a past wrong…

I’ll review each story separately and then do a summary of the book as a whole. Winter Wedding bells includes three related romance short stories.

The Kiss by Karen Rock
This was a great start to this book. As it’s the first story I kept guessing who the next main characters would be, but there are so many interesting characters that in the end I still wasn’t 100% sure who would be in the next stories as there are so many interesting side characters. The Kiss features Julie who is going to marry Mason, but right before the wedding she get’s cold feet and starts thinking about what she wants in life.

I thought it was a fun and cute romance, there are some awesome winter scenes and a sweet romance. This story really brings out the Christmas spirit in full force and I liked that. I did have a small issue with the romance though with how the guy simply expected her to change and Julie was doing everything to change and find her own way and it still wasn’t enough.

I could relate to Julie pretty well, she isn’t a risk taker and pretty anxious and doesn’t easily give new things a try. I also know how hard it is to change those habits. I liked how Julie did her best to live life the way she wanted to and fight for love, but I did think she changed a bit too fast. I wasn’t a fan of a scene towards the end I thought Julie her reaction was pretty believable and I didn’t like how Austin expected more as my opinion he expected too much and could have eased her into it instead of dropping it on her like that.

I liked Austin less than Julie, he guards his heart and while he spends time with Julie he doesn’t really give her a chance, until the end and then he expects her to give everything. They did make for a great couple and I am glad they found each other again. All in all it was a fun story and I liked the setting and getting to know the side characters. There’s a lot of different plot lines going on and every side character seems to have his or her own story and I liked that.

The Wish by Kristin Rolofson
The Wish features Grace the wedding planner and the new cook who both work at the lodge. While I like the idea for this romance, it didn’t fully work for me. I really liked the male main character Nico, he was such a nice character, very vulnerable and romantic. He was the best part of this story. And then there was Grace and I didn’t know why, but I just couldn’t like her, some times she seemed totally oblivious to Nico his attraction and then convinced herself he wasn’t interested or she couldn’t do this and argg, she drove me crazy at times.

These two are driven together when Grace sprains her ankle in Nico his kitchen at the lodge. And he offers to let her stay at his house. He was being very romantic and sweet and she was thinking he was only helping her because he felt responsible. I just had hoped for more romantic scenes with both of them into it, but she constantly seemed to be fighting it, making up reasons why it couldn’t work etc. It just made the romance feel flat and one-sided to me. And after a few chapters I had enough of reading about her sprained ankle. Then there is the Christmas eve visit to Nico his parents and instead of attending as a couple, they attend as maybe more than friends. Then there’s the wedding they have been planning and we don’t see anything about the real wedding.

This story just didn’t fully work for me, I really liked Nico, but I didn’t like Grace as much. The winter setting didn’t fully get brought into this story as they spend most time at Nico’s house, we don’t see the wedding and the Christmas visit at his parents felt too short to really soak up the Christmas feels.

The Promise by Jennifer Snow
This one focusses a bit more on the Christmas elements, which I liked and we sort of see the real wedding. I thought it was a shame there wasn’t more attention to the wedding as the book is called Winter Wedding Bells. The romance was okay, but never fully worked for me. Alex didn’t want to give their romance a second try and her ex Liam kept pushing her. I thought Liam was a bit too pushy and she didn’t think and stood still to listen. There was a lot looking back and some scenes that revealed their past, but I liked their past romance more than this one. There was a lot of pushing from his side and a lot of running away and being defensive from her side and then at last second it all changes and they have their happy after ever. It just felt a bit unbelievable how days couldn’t change her mind and then one night not sleeping could. And I didn’t like how instead of having romantic scenes they kept fighting it and then at the end everything get’s solved so easily.

To summarize: This is a fun anthology with 3 short stories set during the week till Christmas eve. I liked the lodge and Christmas setting. I really felt the holiday spirit. The Kiss was my favourite of these three stories. I enjoyed the other stories left, so I ended up giving it a 3 star at the end. With all the past two stories I felt that both the male was more invested in the relationship and I didn’t fully feel the romances because of that. Each of these three stories will make you wait till the last second to solve things, there is quite some drama and in some cases a bit unnecessary in my opinion. I did like how the stories were interconnected, although I felt that the second one stood out a bit too much, taking mostly place at Nico his house instead of at the lodge. The first and third one are more related, also because Liam is Julie his cousin, and they feature a few of the same characters and we get hints about the characters who don’t get their own story. I also thought it was a bit of a shame there isn’t more focus on the wedding, the actual wedding couple isn’t one of these stories, but we get their story piece by piece through the other ones, which was fun but the real wedding felt a bit rushed and it lacked some impact. All in all a fun book if you’re looking to get into the Christmas spirit and I liked the winter and Christmas setting at the lodge, but most of the romances fell a bit flat to me.

Do you enjoy books set during Christmas? What’s your favourite Christmas romance book?