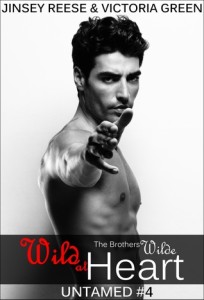 Wild at Heart (Untamed #4)
by Victoria Green and Jinsey Reese

Blurb:
With his dad hell-bent on destroying him, Dare’s life hangs in the balance. Fearing the worst, Reagan rushes from Paris to New York, hoping to get to him in time, only to find their entire world collapsing around them.

The threat is too real, risk too high, death too possible. Unfair doesn’t even begin to cover it.

Two wild hearts that belong together, trapped in a world trying to break them apart. But a love this strong has to survive…doesn’t it?

I started this book as soon as I received it. I just had to know what would happen next. Ofcourse with the way things are going in this series, I could feel the cliffhanger coming from the start. I was actually tempted to not read the last few chapters because I knew the cliffhanger was coming. I have no idea how they are going to get out of this and the wait for the next book suddenly seems very long.

The story in this book feel a bit different then the earlier books and it’s my least favourite book in this series so far. It was still good, but it’s more suspense then contemporary romance. And I just didn’t like all the violence and the feeling of helplessness this book gave me. It feels like there is nothing Ree and Dare can do and their fate is out of their hands and I didn’t like it one bit. Then there’s Dare being a complete ass again and too stubborn for his own good and I just wanted to shake some sense into him. Really why do this again? It also felt a bit like this book was the build-up for the next book.

There isn’t as much character development in this book as in the earlier books. I especially liked what we learned about Rex and Archer in this book and I started liking them both a little more. There’s also a fun side character Adrianna.

The romance was a bit meh in this one. The book started off good and I was anxious to find out what happened with dare and after that it just felt a bit meh. I wanted them together and I hated that Dare was acting like an ass, while it was obvious to everyone but him that what he was doing was stupid. I really wanted to shake some sense in him.

To conclude: this book is my least favourite of this series so far and it seems a bit of a build-up towards the next book. There wasn’t a lot that happened in this book and I could feel the cliffhanger ending looming above our heads as the end neared. There where some suspense elements I wasn’t a fan off, but there where some nice scenes with side characters. While this book wasn’t as good as the previous ones I still read it in one sitting and can’t wait to read how Ree and Dare’s story ends in the 5th book!

You can add Wild at Heart to your to-read list on Goodreads.

You can buy Wild at Heart here:
–Amazon
–B&N
–Kobo

2 responses to “Review: Wild at Heart by Victoria Green and Jinsey Reese”