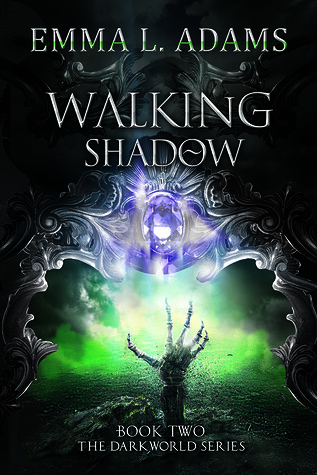 Walking Shadow is a fast paced and fun book. It had been a while since I read the first book in this series, but there was enough recap to remind me what happened nad get em back into the story again. There’s some mystery plot going on, there are multiple things, but it felt like one plot. One thing I missed was the opportunity for side plots Everything seems connected and even though it doesn’t make sense at first it seemed part of the same thing. While there seems to be some overarching plot as well, the individual plot in the novels seems to mostly overshadow that one so far. Walking Shadow is a well written book though and the mystery and fast pace kept me turning the pages and wondering what would happen next and how it was all connected.

I am not a fan of zombies in book and while these had an original twists it still wasn’t my favourite part of the book. The whole thing with the doppelganger, shapeshifter, ghoul thing was a bit weird as well and the many different terms could be a bit confusing. Although I did like the twist at the end concerned about it. The plot is a bit predictable, but it was still fun to read.

I did like how while there was a lot going on it still gave the feeling there was homework and school stuff going on as well, it didn’t take over the plot, but there were small hints here and there that still gave the idea that normal school life kept happening as well.

This series has a fun cast of characters and while I like them I always wish we could a little bit more insight into their character. We did learn a bit more about Leo in this book and his guardian, which was fun, although I still felt it difficult to really feel like I know him. I liked having read the novella as it gave me a bit more insight into Claudia and why she uses that fan for example. Berenice and Howard always seem a bit elusive and would love to read a novella from her point of view once. And then there’s Conrad, he was a bit of an annoying character and then at the end, yeah that was weird. I do like the fortune teller, I like how mysterious she is and how she helps the characters.

There was some romance, but it’s so little it was a bit off. I would’ve preferred for it not to be there at all or given a bit more attention as I wasn’t feeling the romance.

There’s some nice pieces of new world building in this book, but it’s really subtle and then there’s a talk towards the end at which some nice tidbits are revealed. I still like the whole idea of the Darkworld it’s really original, although it’s a bit hard to get a good grip on what is possible, with the magic and demons and what the limits are.

To conclude: this was a fun, fast paced and enjoyable story. The focus is mostly on the main plot and there aren’t many subplots, but it kept my interest and I wanted to keep reading. The plot is a bit predictable at times. There is a fun cast of characters, although I wish we would get to know them all better. There are some new tidbits of information/ world building revealed mostly towards the end. This made for an entertaining read and I am looking forward to the next book.

You can add Walking Shadow to your to-read list on Goodreads.

I like fantasy books with an original worlds, so tell me

What’s the most original fantasy world you’ve come across in a book?