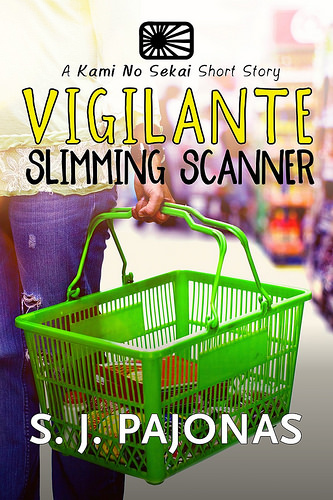 Blurb:
The grocery store registers have a mission to save Toro from his bad eating habits, and he’s determined to stay the course.

Will they inspire him to change or will he convince them to give him a second chance?

I am really enjoying this series by SJ Pajonas and would recommend it to everyone looking for fun and enjoyable short stories. They are all set in Japan and are about Kami or gods who live in things. But somehow this one just fell a bit flat for me. I don’t like reading books about character who are dieting or the focus on healthy eating and as this short story is pretty short, that’s basically the only thing this book is about. Main character Toro doesn’t have a healthy life style and one day the registers simply refuse to have him pay for his junk food. I totally got why Toro got angry at them, as I thought it was a rude way to get their point across and it’s a wonder that strategy was even effective in the long run. Then they start to encourage him to work out, it was cleverly done how these registers influence his life and make him leave healthier.

I just wasn’t really feeling this book and all the changes Toro made went to quick and easy it just felt a tad unbelievable. I know it’s a short story and that’s why things have to move a bit quickly, so I do think it’s understandable to a certain degree. I also thought it was nice to see Toro change over the course of the novella. And the ending is nice and uplifting. I like how these stories all end on a happy note, although this story felt a bit more serious than the previous ones.

I had a bit of trouble getting to know Toro as I wasn’t able to get a good feel for his personality. He works a lot, we meet one of his friends, we learn he has a hard time committing to anything and he loved his junk food and drinks. I do think it was great he changed his habits and started eating more health and even seemed to enjoy cooking. I also enjoyed the conversations between him and his co-worker. then there is a hint of friendship with a women he meets thanks to the registers, but it was too short to really get a feel for her. I liked there was an epilogue at the end that shows how he’s doing 3 months later and I thought it was well done as this way the author could show his change, without it feeling too rushed.

In the previous books the stories were mostly about one Kami or god and one main character. But in this book there isn’t really one Kami, but multiple ones. I wasn’t able to get as a good of a feel for the kami’s in this book due to that. They mostly came across as noisy, intervening and helpful registers. It also seemed the kami were everywhere and lots of people could hear them in this book and I thought the whole kami concept worked better in the previous books. It does give a feel of how many kami there are and how they are everywhere, which was interesting, but it also was a bit weird.

To summarize: this novella fell a bit flat for me, I didn’t like the focus on dieting and the change seemed a bit too fast. It was a nice and quick read with a good and uplifting ending. It tells the story it wants to tell, but it was a bit difficult to get a good feel for Toro and the kami their personality. There are some fun scenes, like the interactions between Toro and his co-worker and the epilogue was done well. I also preferred the way the Kami were done in the earlier novella’s with only one kami and one main character. So overall it was a nice read, but I just didn’t enjoy it as much as the previous ones.

Do you enjoy series that are completely made up of short stories or novella length books?