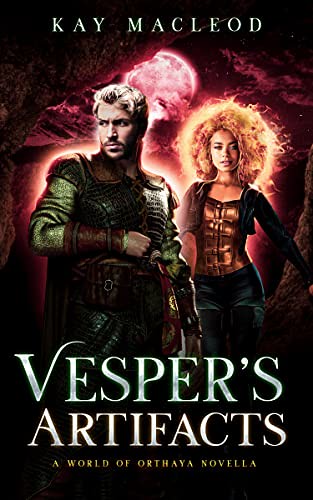 Blurb:
Time to gather a party and venture forth!

Nathaniel Tarrandor Kelbrooke is determined to prove his worth by founding the greatest artifact hunting group of all time. And he refuses to use the money and connections of his wealthy adoptive family to get there.

When he hears about an ancient site recently uncovered by a landslide, he’s instantly up against established teams to be the first to explore the perilous tunnels. So what if his party consists of a fairy who would rather stay home drafting supply lists and a spiritling historian with no field experience? It’s not like he can afford to pay them, anyway…

Ahead is an arduous trek, the remains of an avalanche, a cave full of monsters, and —worst of all— the possibility of no treasure at the end.

I really like Kay MacLeod’s books and was looking forward to read this one. It is set in the same world as Trial of the Red Rune, but can easily be read as a standalone. This book follows Nathaniel’s point of view, who wants to found an artifact hunting group and create something for himself without the help of his wealthy adoptive family. It has a nice fantasy and adventurous vibe and it fit my current reading mood.

I liked reading about Nathaniel, I felt like we got a good feel for his character and motivations. You really feel his love for adventure and travel and his determination to create his artifact hunting group. I liked reading about him and thought he was an interesting character to read about. After they hear about a newly discovered ruin he teams up with his best friend Cal and a newly hired person to check it out. They run into more trouble than expected.

I liked the pace of the book and how we got to know the characters as well as have a smoothy progressing story. The author got a good balance between plot and character development. There’s plenty of action, but I also liked how they don’t solve everything with violence. There are even some touching scenes that give insight into characters and a bit of a sad scene toward the end.

I liked seeing a bit of the various magical races in the world as well as the interesting tavern for flying species only. There are lots of interesting bits and pieces to give a feel for the world and there’s definitely enough potential for more stories whether about Nate and his group as well as other characters. I do hope we see more of Nate and his group as they were fun to read about.

To summarize: This was a fun read. I liked the adventuring vibe of the story. Nate is an interesting character to read about and I felt like I got a good feel for his motivations and personality. The pace is well done, but there’s plenty we learn about the characters as well to bring them alive. There’s plenty of action as well as some scenarios they solve without violence. I hope we see more of Nate and his group in future books as there’s definitely potential for more stories about them. I liked how we see a bit of the world and the various magical races. I had fun reading this one and look forward to more stories set in this world.