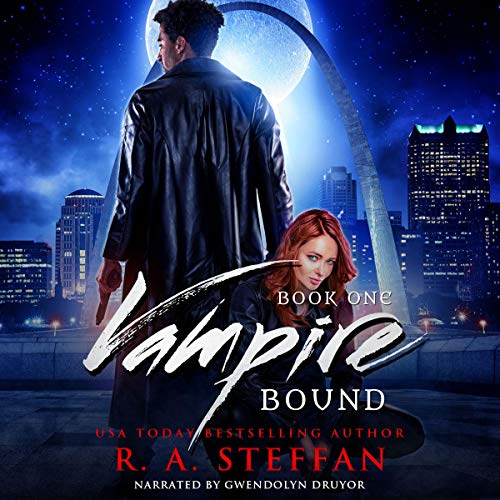 And suddenly I’m neck deep in a world I’ve never really believed in, no matter what my crazy Great Aunt Mabel used to say.

Seriously, I have more than enough drama in my life already, without adding an irresistibly mesmerizing nightclub owner to the mix. My boss—a man with a penchant for trouble and the echo of tragedy lurking behind his dark gaze.

My new coworkers appear to be universally insane. My deadbeat ex is in trouble with a capital “T,” and if history is any indication, he’ll do his best to drag my son and me right along with him. In other news, I’m also being hounded by creditors who seem to think you can make money appear in someone’s bank account by threatening them over the phone.

(Though to be fair, if that approach worked, I’d be all for it. Spoiler alert—it doesn’t.)

To top it all off, while my back was turned, I’ve somehow become a chess piece in a cold war between supernatural factions. Just because magic supposedly runs in my family doesn’t mean I know the first thing about Fae or demons or vampires or any of this craziness.

But it looks like I’m gonna have to learn. Because now they’re coming after the thing I hold most dear — my son. And I’ll do anything to get him back.

Watch out, paranormal world.
Hell hath no fury like a mother’s wrath.

Vampire Bound is a new urban fantasy romance series by R. A. Steffan, set in the same world as the bestselling series The Last Vampire. Download Book One today, and enter a world shared by humans, fae, demons, and vampires. It’s a place where the supernatural threatens the mundane, nothing is as it seems, and love will either be the world’s downfall—or its salvation.

I’ve enjoyed RA Steffan’s books set in her Eburosi Chronicles world and finally decided to read one of her other books, or actually listen in this case. I wanted to start with her Fae series, but then found out that was a spin-off series of Vampire Bound, so I decided to start here instead. Now it turns out Vampire Bound also is a spin-off series from The Last Vampire, which I haven’t read. I found this book easy to follow and there was enough information to bring you up to speed if you haven’t read the earlier series.

Vampire Bound Book One is one of those books that is difficult to review for me. I really liked parts, but then others didn’t quite work for me. I liked how every scene felt like it had a purpose and furthered the story or developed the characters. This made the pacing feel great. On the other hand I felt like the story lacked a bit of direction. Even at the end I am not quite sure what the main point of this series is. We still don’t have a motivation for one of the bad guys and that makes it feel a bit directionless for me. At times it feels more like a daily life type of story just with paranormal creatures added in.

I like how early in the book Vonnie finds out the supernatural exists, I think it’s even in the first chapter, but then something happens due to which she doesn’t remember. Now as readers we know, but the main character doesn’t, so I just felt like I was waiting for her to re-discover the paranormal world. It did feel very realistic what happened, but at the same time it felt a bit off.

The story kept my attention, but at times it wavered. I also had to pause the book at a certain point after a horrifying scene. I managed to finish the book, but because of that horrifying event I never got as into it as before that. The book can also be a bit bleak at times. Some paranormals rule the world basically and there’s nothing much the charters can do about it. It felt a bit helpless because of that. I assume this will change in future books, but for now the situation just felt bleak and hopeless. Then there is the fact that Vonnie is poor and has to pay off creditors that her ex lent money to (not a fan of that set up). Basically Vonnie is in a whole lot of trouble, not much is because of what she does or did. And her role in everything felt kinda passive so far, she’s trying to solve all these problems that aren’t caused by her in the first place. There isn’t much she can do and every time she does make a plan to solve a little piece of it things go wrong.

I liked the characters in this book. How the characters reacted felt very realistic. I liked that. I like how much Vonnie cared for her son and how she did the best she could given her situation. I liked her trying to make the best out of things. I really felt bad for her and I look forward to seeing her in situations where she decides the direction or has more control. The side characters are awesome too and it feels like a lot of them have their own story and past as well, which makes them feel more alive. The romance is set up in this book, but it doesn’t really go anywhere yet. By the end we do get the feeling it’s mutual. I am looking forward to see how that progresses.

It took me a bit of time to get used to the narrator, but after a few chapters I thought she fit the story well. I also had to speed this one up to 1.3 and then it was great to listen to. I liked the variety of voices she did and how eahc character had their own voice. She let the emotions of the characters show through in the way she talked and I thought that was well done.

To summarize: This was a solid start to this series, but a bit of a mixed read for me. Every scene has a purpose and the pacing feels solid. The story can be a bit bleak at times and there’s a horrifying scene later in the book that diminished my enjoyment. I also felt the story lacked direction a bit at times. A lot of bad things happen to the main character, but most of it isn’t her fault and there isn’t much she can do. I liked the characters and learning more about the paranormal world. It took me some time to get used to the narrator, but I thought she narrated the book well with plenty of different voices for the different characters.

2 responses to “Review: Vampire Bound Book One by R.A. Steffan”