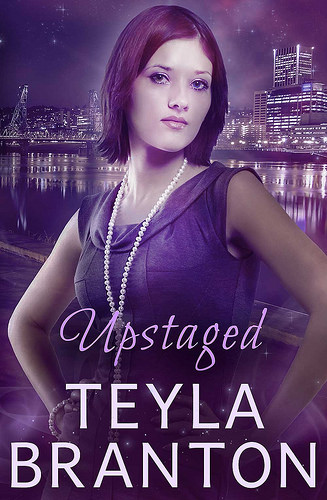 Blurb:
In a world of make-believe, only imprints can uncover the truth

Autumn Rain’s unique ability to read imprints is put to the test as she attempts to find a missing actress—and ends up discovering a murder. When her investigation leads to an eight-year-old mystery that involves more missing actors, Autumn becomes embroiled in a make-believe world where it’s difficult to tell fake imprints from real, and where everyone appears to have something to hide.

To learn the truth, Autumn must team up again with the handsome Detective Shannon Martin, complicating their uncertain relationship and testing her loyalty to her best friend Jake Ryan.

Life takes another unexpected turn when Autumn discovers a clue to her own past that may explain her unusual abilities. But her mixed feelings about this discovery are put on hold as she finds herself in a deadly struggle to keep from being upstaged permanently.

My Review:
I can’t get enough of this series. I started this one right after I finished book 2, which is something I never do. I don’t binge read series and always read at least one other book in between before I continue a series. But I wanted to read the next book so I just continued on with the series. Something about this series really works for me. The blend of suspense and paranormal, the interesting characters and the way the story develops keeps my attention.

The mystery in this one was a bit more of a typical murder mystery than the previous books. An old acquaintance of Autumn asks her if she can find his sister. But when Autumn goes to investigate the disappearance she stumbles upon the dead body of an other actress. The two investigations sort of run through each other. They have to figure out who killed this actress. And is the death of this actress connected with the disappearance of the other girl.

The investigation about the murder read a bit more like a standard murder mystery, but then with the usual paranormal twist of Autumn’s powers, which shed light on some things. Autumn’s focus was on finding the disappeared girl and figure out if this was connected with the murder. I liked how her ability played a role again in the investigation. And there was a nice twist with how the killer predicted some of the things they would do. I hadn’t predicted who the killer was, but I wasn’t too surprised either. There’s an intense show down scene at the end and then things get wrapped up. There are some secrets that get revealed at the end of the book when everything falls on it’s place. And a few well placed hints that make me think you could probably figure out who the killer is. I also wonder how what happens impacts Autumn in the next book.

The story takes place a lot around a theater as that’s were they find the body and where the girl who disappeared was going to be in a play before she disappeared. The whole theater had a bit of a shady feel somehow. And the actors and actresses all seemed pretty competitive. I like how each book in this series has a very different setting and different group of people it focuses on and are involved in the investigation, but with the same main group of characters that investigate.

Besides the mystery there are other plot lines taking place as well. There is an important side plot line about Autumn and her sister Tawnia finding someone who knew their mom before she died. And they slowly trace back things and discover a bit more of where their gift came from, which was very interesting as we hand’t learned much about that so far. And at the end there is a hint that plot line will continue in the next book. There is a bit of a sad backstory involved with that part, even tough Autumn and Tawnia grew up happily, their mother went through some tough things.

I like how even tough each book has a different mystery there are plot lines that continue through the series. Except for the plot line about their abilities, there is the plot line of Tawnia’s daughter. In this book the baby is born and is a part of the story now as Tawnia almost always has the baby with her. There is also the romantic plot line for Autumn and a plot line about her self defense.

At the end of the last book I wondered how the romance would continue. In this book Autumn isn’t dating Jake anymore and she has feelings for the detective Shannon, but she isn’t sure who to choose and feels pretty conflicted about it all. I thought it felt realistically done how things developed and now that she was no longer in a relationship with Jake she grew a bit closer to Shannon. I liked how the romance developed and I am curious to see how things develop in the next book. I really like reading about Autumn and the characters surrounding her.

This book was an important one in terms of world building as we discover more about were Autumn and Tawnia’s powers come from. We get a few answers in relation to that, but things are a bit unclear as they haven’t met the person yet who can tell them more. But I am thinking we we’ll get more answers in the next book. I also liked how Autumn is pretty comfortable with using her ability now and knows better how to handle it. Tawnia’s ability is mentioned a few times as well. It’s great to see how their abilities play an important role in the mystery and the side plot lines.

To summarize: I can’t get enough of this series! This was another great book in this series with a new mystery to solve and some of the continuing plot lines progress. The mystery in this one was a disappearance combined with a murder mystery. I liked how it was a different progression than the previous books, but it wasn’t my favorite mystery. I hadn’t guessed who the killer was, but wasn’t too surprised either. There was a big development in this book regarding information they find out about their abilities, which was interesting. The romance also develops a bit and I am curious to see how that continues in the next book. I enjoy reading about Autumn, the other characters and seeing how her ability plays a role in solving the mystery. This was another great book in this series and I plan to start book 4 soon.

What’s the last book you read with a theater setting or theme?