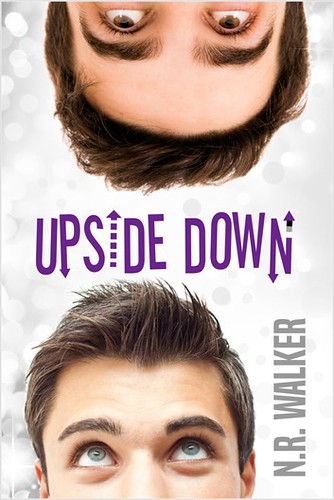 Upside Down
by N.R. Walker

Blurb:
Jordan O’Neill isn’t a fan of labels, considering he has a few. Gay, geek, a librarian, socially awkward, a nervous rambler, an introvert, an outsider. The last thing he needs is one more. But when he realizes adding the label ‘asexual’ might explain a lot, it turns his world upside down.

Hennessy Lang moved to Surry Hills after splitting with his boyfriend. His being asexual had seen the end of a lot of his romances, but he’s determined to stay true to himself. Leaving his North Shore support group behind, he starts his own in Surry Hills, where he meets first-time-attendee Jordan.

A little bewildered and scared, but completely adorable, Hennessy is struck by this guy who’s trying to find where he belongs. Maybe Hennessy can convince Jordan that his world hasn’t been turned upside down at all, but maybe it’s now—for the first time in his life—the right way up.

This is the second book I read by this author. One of the issues I had with the first book (Evolved) I read by this author was that there was a bit too much sex in it, so I figured a novel about an asexual couple would be the perfect one to try next. Upside Down is a sweet romance novel about two asexual guys who fall in love while one of them discovers what it means to be asexual, but mostly its just a very sweet romance story.

The story is told from the point of views of Jordan and Hennesy. They both take the same bus home and Jordan is kinda obsessed with the bus guy or headphones guy as he names him. Then one day they meet for real during the asexual support group meeting that Hennesy organizes. After that they slowly grow closer. I liked getting both their point of views, but their voices are pretty similar, so sometimes I had to double check whose point of view I was reading.

This was a nice slow build romance, they got to know each other after the meeting by asking each other questions during the short bus ride, which was fun. And they go on several dates. I liked how well they fit together and how they liked the same things, although they did seem a bit too similar almost at times. their personalities and interest are very close together. I didn’t get most of the book references and quotes, so that part didn’t really work for me as I didn’t know the books they were talking about.

It was interesting learning a bit more about what being asexual means. I think this is only the second book or so that I read which has asexual characters, so my knowledge is pretty limited and it was interesting learning more about it. I liked that while they were asexual, they also were sex positive and didn’t mind others having sex. Although I did found them a bit lacking in understanding when it came to previous boyfriends wanting sex. I think understanding should come from both sides, but at the same time it seems like a difficult situation to make work. It was nice to see how these two characters who were both asexual made things work and how their romance progressed. I also liked that they talked about what they did like and what not, when it comes to everything from holding hands, kissing to sex. The information about asexuality did seemed sprinkled throughout the book a bit weirdly at times. It just felt a bit unnatural at times.

It did bother me when they had this weird misunderstanding later in the book. They always managed to talk things out and Hennesy was able to pull Jordan out of his nervous moods or worries, but not here. It felt like a hurdle or conflict must be present and that’s why that scene was there and it just felt forced to me. I thought having them talk it out would be more in character as that’s what they did so far.

Another things that bothered me was the overuse of curse words. Jordan loves saying the MF bomb and says it all the time, even when inappropriate, maybe especially when inappropriate. And a lot and I really mean a lot, although it gets toned down a bit later in the book luckily. And half of the time it just didn’t feel like the right place to drop another curse word or like it even fit in the sentence. Or a normal F bomb would be more appropriate if he had to curse in some sentences. All the cursing made him seem/ be rude and unprofessional. I didn’t care for it at all. I don’t mind some cuss words in books, but here it felt overdone and misplaced. I think it was supposed to be funny, but it wasn’t to me. Jordan also tended to ramble on while being nervous, which could be both endearing and kinda annoying depending on the rambling. It could go on and off topic a bit too often at times, but it also led to some funny scenes.

From the book description I had expected his struggle with coming to terms to his asexuality would be a bigger part of the book. It is an important part of the book for sure, but I also felt like it was mostly about their romance. Them being asexual was a part of it, but the journey of Jordan accepting that part and learning what it means was only a small part of the actual story. The focus was more on the tow of them getting to know each other and falling in love.

While I did like both characters and thought they were sweet together. The whole book felt like something was missing for me to fully enjoy it. And I don’t mean the sex, I thought it was great to read a book without sex here the characters make such a conscious decisions to not have sex. There just was missing something that would’ve made this one a great read instead of just okay. I am happy I read this book, but at the same time it just never reached that “really enjoying this” level.

There were some fun side characters as well. Jordan had two great friends in his roommate Angus and his bets friend Merry. And Hennesy worked for his best friend Michael. I also liked the Soup Crew, although at times it did feel that a lot of other characters were invested in their romance and took a part in it. I liked the way the story wrapped up in that over the top happy way as that totally works for me in romances.

To summarize: this was a cute read with a sweet romance about two asexual guys falling in love. I thought it was interesting to read about two asexual characters as I don’t know a lot about the topic. It’s told from dual point of view of both main characters and I liked getting to know them, although their voices were a bit too similar at times. Same goes with their personalities and hobbies for the most part, they almost seemed a bit too perfect of a fit. I did like Hennesy a bit better. For some reason this book failed to fully pull me in. I didn’t care for Jordan’s overuse of curse words. It wasn’t funny to me at all and he just came across as rude. I thought the big misunderstanding later in the book felt a bit forced. I liked how both characters had friends and there was an over the top happy epilogue type chapter at the end which I liked.

4 responses to “Review: Upside Down by N.R. Walker”