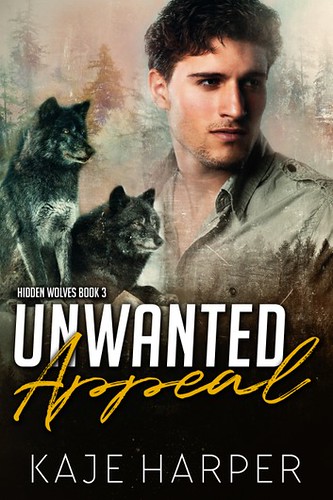 Blurb:
Do strangers want to join Aaron’s pack, or wipe it from the face of the earth?

Aaron, Alpha of Minneapolis West, is tired of other werewolves threatening his pack for harboring a gay wolf and his mate. Werewolves have more important things to worry about, with humans closing in on discovering them. But the arrival of two strange wolves on his doorstep, asking for sanctuary, pits compassion against safety. Can he let these two in and still keep his pack and his mate Zach safe? Or is that a risk he can’t afford to take?

Unwanted Appeal is the third book in the Hidden Wolves series, just like the second book it’s about Zach and Aaron. Where book 2 only had Aaron’s point of view, this book switched to third person perspective again and showed us both their point of views. I really liked being able to get Zach’s point of view as well in this book as it helped get to know him better and understand him.

I really am enjoying this series and this book was another great read. I enjoyed Unwanted Appeal. It’s shorter than the first two books, but it works well as book 3 and feels like an essential part of the story. In Unwanted Appeal two different wolves come to Aaron’s pack in two different ways, for each wolf Aaron has to decide whether to trust them and let them join the pack or not. It was interesting to learn more about these two new wolves and see how Aaron handled the situation. He also has to struggle again with his urge to change the pack and to hold on to their past ways of doing things. He is still hiding his sexual orientation as well as his romance with Zach. I had wondered if that would change in this book and I have to say I liked how that was handled, it felt appropriate and realistic.

While I wasn’t fully sold on Aaron and Zach’s romance at the start of book 2, it grew on me then and in this book I have to say I felt their romance more. This book actually is mostly focused on the story, but I felt like seeing how they still handle being a couple and the way they interact made me see how well they were doing together. Having Zach’s point of view also helped. The worries and struggles they face as a couple that are there at the end of book 2 are still there, but I feel like they can deal with it better now.

Unwanted Appeal also felt like a sort of set up for future books. It continues the story of Aaron and Zach and shows how the pack is doing and introduces some new wolves and shows the problems the pack is still facing. I feel that the rest of the series will continue to build upon this.

I also liked how we still continue to see a lot about Simon and Paul and how they fit into the pack. The way Paul still struggles with the way the pack handles things, makes for some interesting scenes. I also like he doesn’t just keep his mouth shut, instead he stay true to himself and keeps asking the hard questions. There is a fun scene where Zach visits Simon and Paul and it was fun to see more of them now from another point of view.

To summarize: This continues to be an awesome shifter romance series. The plot is solid and I like reading about the challenges the pack has to deal with. In this book there are tow new wolves who want to join the pack and Aaron, the alpha, has to decide how to handle it. I liked the switch back to third person perspective and how we got Zach’s point of view as well in this book. I liked getting to know Zach more and I liked the romance between him and Aaron even more now that they’ve been together a bit longer. It’s fun to still see more of the couple from book 1 as well. And I liked how this book feels like it sets up some plot points for future books and shows what the pack is still struggling with. All in all another great read and I look forward to the next book.