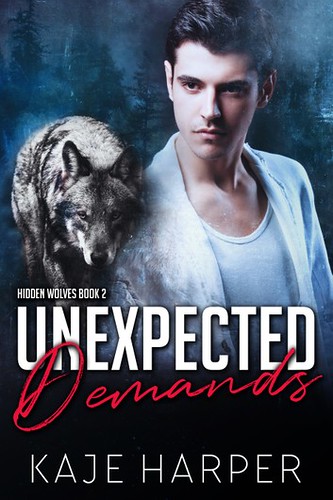 Blurb:
He’d rather fight enemy wolves and rogue humans than face his own heart.

When Aaron took down a violent, power-crazed wolf and inherited half a pack, he knew being Alpha wasn’t going to be easy. A week later, he’s finding out what an understatement that was. Other werewolves are calling for the extermination of his pack’s gay wolf, or for Aaron’s own death, and the risk of exposure to humans is growing.

Aaron can’t afford to let his long-suppressed sexuality escape his rigid control. When one of his younger wolves is in trouble, it’s simply Aaron’s job as Alpha to help and protect him. But keeping a cool distance from a young man who appeals to all his senses could be Aaron’s toughest challenge.

This is a rerelease of the 2012 original with light editing. Content warning for substance abuse, some violence.

After reading the first book in this series I was excited to continue the series with book 2. This book took me some time to get into, but I ended up enjoying it. It’s very different in tone and style than book 1 and it took a while to get used to that. Book 1 is dual POV, third person perspective with the focus on slow burn romance and the werewolf pack politics and suspense plot line on the background. This book is solo POV, first person perspective with the focus on plot, continuation of the previous couples journey and a romance that starts out as more lust and attraction and only then slowly builds into more.

So yeah this one was a slow start for me, but eventually I got into the story and it still turned into a great read for me. This book has quite a lot going one and actually kinda feels like it’s made of multiple parts, with a part about Aaron proving a gay mate bond is real to other packs, then a part of the romance and then a more suspenseful action packed part at the end that deals with a potential werewolf discovery by humans. I did like most of the parts, although the romance took me some time to warm up to. The plot line with the other packs was interesting and I liked how Aaron who is now alpha handles it all. He wants to protect his pack and I liked how he goes about it smartly.

The last part of the book was more tense and action packed as they deal with humans who found the truth about werewolves. I feel like this is going to be a big part of the series going forward and this shows the fears of the werewolves and how ruthless both humans and werewolves could be. There are some darker parts at times, but I thought it was well done how the author shows the impact the violence and killing has on the characters and doesn’t just brush it off.

Where Paul and Simon’s romance from book 1 was left a bit open at the end of book 1. In this book we still see a lot of them and how they deal with things. I liked being able to see how they found some resolution and continued to grow closer. Even from another point of view it’s clear how much they care for one another. And I liked the continuity this brought to the series.

Then there is the romance of this book. The main character and the only one whose point of view we get is the alpha Aaron. The love interest is a young 21 year old kid called Zach, whom we met in book 1 already. The starts of their romance just felt off to me. I admit age gap romances aren’t my really my thing and I hadn’t expected to run into that in this series, but I think my main issue is that Zach acts so young at the start. He’s only 21 years old and has had a rough life, he acts out and acts like teenager a lot. Then there’s Aaron who treats him like a kid as well. And it just felt weird to have them be attracted to one another, especially as that’s all there is at first. Their romance grew on me as the book progressed and we see some more emotion come into play. Zach also starts to act a bit more adult like and I started to like their romance more. Even so it just never quite got as compelling as Simon and Paul’s romance.

Just as with book 1 this book has a bit of a non-ending again. There is a resolution for the plot, but not for the romance. In fact I think the last chapter would’ve made a better ending, it ends on a hopefully happy for now feel. While the epilogue just introduces some more doubt in their romance. It seems book 3 will follow the same couple as well, so that should wrap up their romance then.

To summarize: This was a great read. I like the authors writing style and the way this book furthers plot lines established in book 1, but also new ones and a new main character. It took me some time to get into this book with the different POV, different main character and a romance that didn’t quite work for me. But the further I got into the book the better it got. The plot is compelling and I enjoyed seeing how it all played out. It also was great to see more of the couple from book 1 and see them grow even closer. The romance in this one didn’t quite work for me, as age gap romances not always work for me and Zach acted quite young at first, but I did warm up to it by the end. For me the plot was what really kept me reading. The ending resolves some of the plot lines, but the romance is still not quite a happy ending and book 3 will continue this couple’s story.