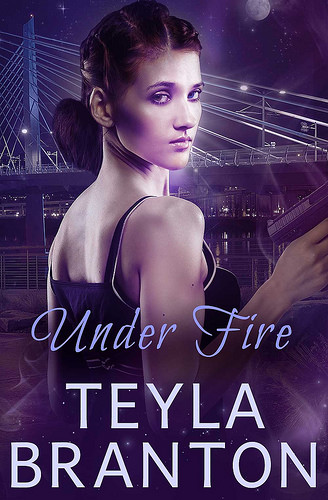 Under Fire (Imprints #4)
by Teyla Branton

Autumn Rain is back to work, along with Detective Shannon Martin, but this time her investigation is personal. Autumn must prove whether or not her biological father, is responsible for the disappearance of a young girl. Cody Beckett’s past record makes him the main suspect, even if there’s not enough evidence to arrest him, and Autumn’s extraordinary ability to receive impressions from objects that have special meaning to their owners might be the only way she can uncover the truth.

What Autumn discovers is far bigger than either she or Shannon expected. Secrets, lies, lost evidence, and more than one missing girl all point to a conclusion they don’t want to accept. But while Autumn struggles with her own volatile emotions regarding her family, time is running out.

My Review:
This series is so good and Under Fire might be my favorite book in the series so far! Not only is there a very intriguing mystery plot line with some great twists and reveals at the end, there’s also a great more personal plot line about Autumn meeting her biological father. It was a suspenseful read where I kept wondering if someone was involved or not and who was on Autumns side and who not.

The mystery/ suspense plot line in this book was really good. I liked how with each new piece of information we not only got more insight in things, but also more questions. Nothing is what it seems and there are multiple things going on that blend together. So it’s hard to figure out what’s exactly going on, who is telling the truth or not and where the missing girl really is. And then there seems to be even more at stake than one girl’s life. There is this scene late in the book where Autumn doesn’t know who is on her side and it was quite suspenseful, because you knew things would go very badly if she trusted the wrong person. I also liked how her ability played a role again in the investigation.

Then besides the mystery we have the plot line of Autumn meeting her biological father. He is the main suspect in Jenny’s disappearance and Autumn wants to find if he is guilty or not. She wants answers about where her ability comes form and maybe even feel that connection of family with someone besides her sister, but she’s also wary. He has done something very bad and she isn’t sure whether she wants him in her life or not. I felt it was very realistically written how Autumn struggled with this and it was nice how she stayed levelheaded even tough she was really curious and wanted to know more about her family.

I did feel a bit bad for Autumn how she hardly gets any down time in this book. I think the whole book takes place over the time span of one day. And with how time sensitive the case is that makes sense, but it still felt a bit tiring how they just kept going.

The romance is still pretty much a very small side plot line, now that she has picked Shannon maybe even more so than in the previous books. I really liked these two together and how they worked together on this case. Even tough they spend very little private time together to really connect I did enjoy seeing them working together to crack this case. And it is obvious how much they acre about each other. I wouldn’t have minded a bit more romance, but at the same time with the high stakes case I would’ve felt weird if there was more romance too.

There are few of the standard characters that play a role in this book. as they travel to another city there is mostly a new group of side character we meet. There are a few mentions or scenes with Tawnia, Jake and Paige, but not nearly as much as usual. Instead the police force in the other town become the new side characters. And Cody and the parents of the disappeared girl make an appearance too. It was interesting how this book took place in a different city and switched things up a bit with them working together with the law enforcement there.

This felt like a pretty insightful book when it comes to the whole world building/ paranormal aspect. Not only are there a lot of imprints that Autumn sees in one day, there’s also a bit of information of where it comes from and I think we might get even more answers about that later in the series. It also was itnerestign to have someone who knew of her ability working against her again in this book as it prevented her from finding some imprints that might’ve shed light on things earlier.

To summarize: this was another great book in this series. This one might be my favorite yet. the mystery is really good, with reveals leading to more questions. For a long time it stays unclear what exactly is going on, but there is progress in the case too. There are some nice reveals and twists at the end when everything comes to light. The personal storyline about Autumn meeting her biological father was interesting too as she isn’t sure if he’s guilty or not, but she does want to know more about her ability and family. I liked how she was pretty wary at first, but also tried to stay objective. The romance stays mostly to the side in this book. I did liked reading about Shannon and Autumn and how they worked together to solve this case. This book shed some more light on the imprints ability as well. All in all this was a great book and this series keeps going strong. I am looking forward to book 5!

What’s the latest book you read with some well done reveals?

10 responses to “Review: Under Fire by Teyla Branton”