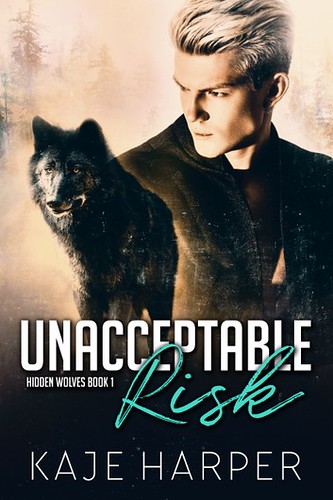 Blurb:
For a hidden shifter, falling in love with a man may be the death of them both.

Simon Conley knows about being an outcast. Born into a secret werewolf pack, he’s the lone gay wolf, an outsider even among his packmates. The top wolves consider him a perversion, a failure, and a security risk. To survive in the human world, werewolves rely on absolute secrecy, and any breaches of their code are dealt with swiftly— and violently.

So when Simon falls in love with Paul, a human man, even his Alpha’s grudging tolerance won’t protect him. He must keep Paul from discovering the truth about him and the secrets the pack jealously guards, or it’s not just their love that’ll end up dead.

rereleased 2021 with light editing and the 1.1 short story included

I won this book in a giveaway and I am so glad I did as I ended up really enjoying this one. I wasn’t sure what to expect at first, but I got hooked from the first chapters and wanted to keep reading. I liked that this was a longer book as this way there’s more time for the romance and plot to develop and more time to spend with these characters.

I liked the set-up for this one. Simon has been attacked in wolf form and left for dead when vet Paul finds him and takes him back to his clinic. He thinks it’s a big dog and tends to his injuries. This sure was an interesting set up and first meet and after that they quickly meet in human form and grow closer, al the while Simon is keeping the secret that he was the big wolf that Paul found. I liked both Paul and Simon. They’re both likable characters and made for a great couple. I like how compassionate Paul is and how Simon takes care of Paul.

I liked the romance between the characters and how it build slowly. And besides that it also had a solid plot. There’s a lot of tension in the werewolf pack that Simon is part of. The tension is already created at the start with the attack on Simon and it slowly builds. You know something has to change, but I wasn’t quite sure what would happen. It really kept me curious to see how this all would be resolved and especially at the end it gets quite tense to see how things would play out.

The pack is very homophobic and the fact that the alpha didn’t kill Simon when they found out he is gay is a sore point for some of them. It was hard to read how some of the pack treated Simon and even how his friends didn’t dare openly support him. But I felt that this was also the point of the story and how it allows for the possibility of change. There are some hints and attempt at that later on already and it will be interesting to see how that develops over the course of the series.

The romance was awesome. I liked how it starts with this almost slow burn of Paul and Simon growing closer. Simon has secrets to keep, but while he tries to keep his distance he doesn’t succeed. Paul has his own struggles, he thinks he’s straight and never really loved someone. He is lonely, but also cautious. It’s great to see him slowly open up and warm up to Simon, but there’s still a lot they have to deal with. There’s how Paul has to deal with the fact that he’s not as straight as he thought then there’s the secret Simon is keeping about his werewolf self.

I liked seeing them deal with the challenges that came that way. And also appreciated how there wasn’t a lot of drama, but they did have moments where Paul said he needed some distance and Simon gave it to him or when they have to talk things through. I liked how they dealt with things in a mature way and talked about things they struggled with. I did feel their relationship became more focused on the physical and steamy once they progressed into that phase, but luckily there’s enough other things going to break those parts up.

The ending of the first book felt pretty abrupt, which some big things not resolved. It feels a bit like a non-ending. It’s more of a happy for now ending with hopes for more, but while parts are resoled it’s clear the danger from the pack and troubles between the two guys aren’t resolved yet. I hope that will be resolved in future books and that’s why the ending was like this, but it sure felt off to me.

There’s a novella right after book 1 and included in the file that takes place right where book 1 left off. Unfortunately the tone of the novella felt just a bit different. There are some reminders about the plot of book 1 even tough the plot picks up right after book 1, which was a bit weird. To be honest I could’ve done without the novella, it doesn’t add anything to the plot. There is a bit more drama as well as more focus on the fact that they are not out of danger yet and addresses how Paul struggles with how the pact acts. Both of which were already addressed way more subtly and well done in the main story. There is no plot arc in the novella, it’s just a bit more about the two characters. There is no start, middle or ending and it just feels like a little extra or something. It didn’t work for me. I feel like this might be intended as a set up for the next book, guess I’ll see when I read book 2.

To summarize: This was a great read. It’s on the longer side and I liked how that means extra time to spend time with the characters and see the plot play out. I liked the set up of this book and the slow burn start to the romance. The story is interesting and the plot threads surrounding the pack kept me curious to see how it would play out. There is some tension in the pack that increases throughout the book until it gets resolved toward the end. I liked the romance between Simon and Paul and how they communicated well. They had a lot to deal with and there were times where they struggled, but I liked how there wasn’t too much drama and it felt realistic. The ending is quite abrupt and didn’t resolve some major plot threads. There’s a novella right behind it, which didn’t add anything except to overemphasize the threads that were left open. I think in preparation for book 2. I would definitely recommend this one if you like MM werewolf stories.

Links:
– Goodreads
– Bookbub
– Amazon
– Kobo
At the time of posting this book is free.