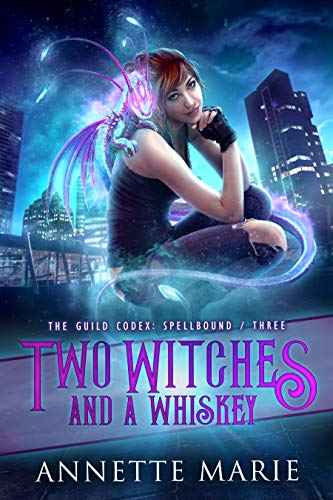 Two Witches and a Whiskey (The Guild Codex: Spellbound #3)
by Annette Marie

Blurb:
Three months ago, I landed a job as a bartender. But not at a bar—at a guild. Yeah, the magic kind.

I’m not a badass mage like my three smokin’ hot best friends. I’m not a sorcerer or an alchemist, or even a wussy witch. I’m just a human, slinging drinks like a pro and keeping my non-magical nose out of mythic business. Seriously, I know my limits.

So why am I currently standing in a black-magic ritual circle across from a fae lord?

Somewhere behind me, my three mage friends are battling for their lives. Somewhere near my feet is the rogue witch I just knocked out with a stolen spell. And I have about five seconds to convince this very angry sea god not to shmoosh me like a bug.

I’m pretty sure this wasn’t part of the job description.

I’ve been enjoying this series so far and happily jumped into book 3. It’s such a fun series and this book has a new adventure for Tori and her friends and continues some plot lines that progress throughout the book. We also get the meet the mysterious creature on the cover, who was a great addition. And Tori has a roommate to deal with. And I liked how both characters from book 1 and 2 all combined here.

Two Witches and a Whiskey was a great read. I had a lot of fun reading it and it’s exactly the type of read I was in the mood for. There’s action, some trouble they have to figure out, great characters, an interesting world and just a touch of romance. It’s pretty lighthearted most of the time and has that fun vibe. There are some reveals again in this book and I liked how some things progresses, especially when it comes to Tori and her connection/ relationship with some other characters/ creatures.

This book just like the previous ones has a plot line that gets resolved within the book, but I still think it’s best to read the series in order because the continuing characters and plot lines work better that way. In this book Tori gets approached by two witches (and yes there is whiskey involved too) who need her help. Tori and her friends get involved and it turns out to be much more than it seems, with a dangerous rogue guild, fae creatures and a dark magic. I also like how the pacing works, with some big things happening early in the book, lost going on and then a bit of wind down at the end.

I like how Tori is just a normal human who gets involved in the world of mythics. And I like how this book addressed that part a bit more. How she feels like she doesn’t fully belong, wish she was a mythic and how desperately she wants to. I felt that part really showed some of her personality too. And it also deals with the question how a normal human can survive in this world of mythics and I think Tori will be just fine, especially after what happens in this book. I liked how things got wrapped up and the conclusion of this book. And am excited for the next book.

Beides Tori, there is a quite the big cats of side characters. There are the three mages and now Zak as well. Then there is Sin, one of Tori’s friends. Justin, Tori’s brother. Tori’s new fae roommate. And lost of guild members who play a role as well. I like how we learn more about Ezra and Kai in this book. There is this hint about Ezra that makes me really curious and I have a guess what it could be. And there’s a piece about Kai’s past that was interesting to learn about. And I also quite liked how Tori’s relationship with Aaron played out. And Zak is still pretty awesome too. It’s hard to decide who I want Tori to end up with as I like them all, but I am leaning toward Ezra or Zak at the moment.

And with every book in this series I feel the world gets expanded upon more and more, which is great. In this book we have witches and also other mythics we learn more about and also more about the fae. And the magic police and the guilds also get explored more. It’s lots of fun to see the world come more alive and I feel like I am getting a better grip on the world.

To summarize: this was another fun read in this series and it keeps getting better and better with each book. In this book there’s another problem Tori and her friends get involved with. Two witches need their help and there is dark magic and fae involved too. I liked seeing how Tori handled everything that gets thrown her way and how she holds her own in this magic filled world as a human. I liked the plot in this book and there are some great reveals. I also liked the new fae characters that play a role in the story. And there are new things we learn about Ezra and Kai which were interesting. I even have a guess about the bit we learn about Ezra. And I liked how Zak plays a role in this story as well. The world gets more fleshed out with each book, which is nice to see. Another great read and I am looking forward to book 4!

What’s the last book with Fae that you read?

6 responses to “Review: Two Witches and a Whiskey by Annette Marie”