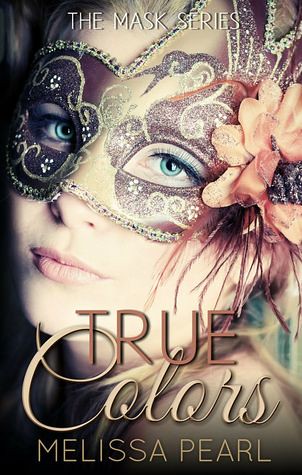 My Review:
I bought True Colors partly because of the beautiful cover and partly because of the interesting blurb. Luckily the story was as good as it sounds. The main character Caitlyn meets a beggar and after that has the strange power to see people their real emotions. She tries to get her power under control, but also uses it to help others. She finds out a big secret, but she doesn’t really know what the emotions mean and there is a bit of a mystery plot line where she tries to find out why peopel feel a certain whay about another character and what he’s hiding. the whole book has a steady pace, but it really picks up pace towards the end when the mystery start making sense and there is even an almost suspenseful scene. The book certainly surprised me a few times as I hadn’t expected it to go into the direction it did.

There were a few things that skated the line of being realistic and unrealistic. Like at a certain scene where the characters made a decision to take matters into their own hands, while I think most people would’ve confined in someone else before acting. There were a few instances like that were I could understand why the did what they did what they did, but also found it slightly unbelievable. It wasn’t unbelievable enough to get me out of the story, but just enough to have me wodner if people would acts like that in real life or if things like that could happen. There are also actions of other characters that felt a bit risky for people with their motivations. And it was a bit darker than I expected in some places, but it was a great read.

What I like most about this book is how it focusses on how people often wear a mask and not show their true selves to the world or are hiding something, have deeper feelings than they show. Which ofcourse is logical, but also means that sometimes people are lying or putting on an act. I think it was realistic and I often have had the thought especially when things are hard about how outward a person can look happy while shouldering a burden no one knows about. It’s interesting to follow this character that can see behind those mask and realizes what people show to the world and what they really feel. I liked this and how it gave insights in the characters Caitlyn meet. It was well done and the way it was described made sense and I could imagine how the mask falling away would look to Caitlyn. It’s a big power she has and I liked how she dealt with and tried to use it to help people. While on the one hand the paranormal aspect of her power is subtle, it’s also very present and it’s really well written in a way that her gift becomes part of the way she observes the world.

The book doesn’t elaborate much on the origin of Caitlyn her gift beside the fact she got it from someone else and it’s left open whether she’s the only with a gift like this or not, but that lack of elaboration didn’t bother me. There is enough information about her gift and how it works and we figure things out along with Caitlyn, which worked for me. And I am thinking that in the future books we will learn even more about her gift and if she is the only one with a gift or not.

Caitlyn the main character is a typical teenager and I like how realistic her voice was. She did act like a teenager, but in a well done realistic way and not in an annoying way. She had friends and while they didn’t were the best friends she did belong somewhere. She’s still trying to figure out what she wants and where she belongs. I liked seeing her grow and change from her power. It was hard to see her realizing how different her friends really were, but I also think it was good and it gave her the chance to decide if she really wanted to be friends with them. It was interesting to see, although I did feel sorry for Caitlyn as facing all those true emotions of people was hard. There are some great side characters, but it takes a while to get to know them and decide who I really liked, especially once Caitlyn has her gift it became clearer what people their true emotions were. Libby was a great side character, just like Erick, Micah and Indie.

There is some romance and while it isn’t the focus it’s still a part of the story. I thought the romance was done well. It developed at a nice speed and I felt they really had a connection. It also had a typical teenager feel, but in a good way. And I liked how Caitlyn actually told others about her power and didn’t keep it a secret and it certainly helped the romance along as well. The romance was sweet and believable and I liked these two together.

To conclude: All in all True Colors is a very original and fun read. I liked the story and it surprised me with the mystery and suspenseful direction it took at the end. It had a typical teenager feel, but in a well done realistic way and not in an annoying way. Caitlyn is a great main character who grows and changes a lot over the course of the book. She shares her secret of her gift with a few people and I liked how she figured out who her real friends where and what to do with her gift along the way. The romance was sweet and well done. The ending wraps things up nicely and I was actually surprised to learn this is a series and not entirely sure if I want to read the rest as it could function as a standalone pretty well.