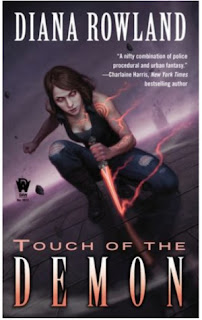 Touch of the Demon (Kara Gillian #5)
by Diana Rowland

Blurb : Kara Gillian is in some seriously deep trouble.
She’s used to summoning supernatural creatures from the demon realm to our world, but now the tables have been turned and she’s the one who’s been summoned. Kara is the prisoner of yet another demonic lord, but she quickly discovers that she’s far more than a mere hostage. Yet waiting for rescue has never been her style, and Kara has no intention of being a pawn in someone else’s game.
There’s intrigue to spare as she digs into the origin of the demonic lords and discovers the machinations of humans and demons alike. Kara is shocked to discover that she has her own history in the demon realm, and that the ties between her and the demonic lords Rhyzkahl and Szerain go back farther than she could have ever imagined. But treachery runs rampant among all the lords, and she’s going to have to stay sharp in order to keep from being used to further their own agendas. The lords have a secret that dates back to earth’s ancient history, and it could have devastating repercussions for both worlds.

Yet more than anything else, Kara’s abilities as a homicide detective will be put to the test—because this time the murder she has to solve is her own.

My Review:
This book is really different than the 4 books before it. It has a different feel to it. If you have read the ending of book 4 you probably have an idea why this book will be different. It is still good, but different.

The story is a bit slow paced and there were moments where I wished the pace would speed up a bit. The book is still very enjoyable and when I was reading it I did enjoy it, but when I wasn’t reading it I didn’t think about it or have the urge to read. The Kara Gillian series is one of my favourite series and I always enjoyed the unique combination of genres. This book has less police procedure and murder mystery, but more fantasy. Just be aware when you start reading this, that it is somewhat different than the earlier books, because that difference was one of the things that made it difficult for me to get into the story. When I finally was into the story I did enjoy it, the story has some slow moments, but the story was really interesting and there are a few plot twists that I really didn’t see coming. Mystery is something this book certainly doesn’t lack, although sometimes I wished that I got more knowledge because most of the story I felt like I was missing things, a lot of things actually. There are so many things that are going on and the reader only get’s to know a small part of it.

Because this book takes places part in the demon rhealm there are different characters we meet. There are many new demons and lords that are introduced to this book and all these new things were really interesting. I did like some of the new characters, some are really awesome and surprised me. There are also some new evil guys we meet and I didn’t get a good grip of why they where the way they are, but then there is so much what remains a mystery. I had some problems with remembering some of the demon names, because they have some complex names and I am not that good at remembering names. So I was confused a few times as I didn’t remember if Kara had met a certain demon already and who he/she was. There is also some awesome character development in this book, you just have to read it to udnerstand.

To conclude: this book is really different than the first 4 books, there is less police procedure and murder mystery and more fantasy. We get introduced to a lot of new characters in this book and we learn so much more about the world. This book is a big change and turn in this series and I am looking forward to read where the author is going with this series.

Add this book to your want to read list on Goodreads!

4 responses to “Review: Touch of the Demon (Kara Gillian #5) by Diana Rowland”