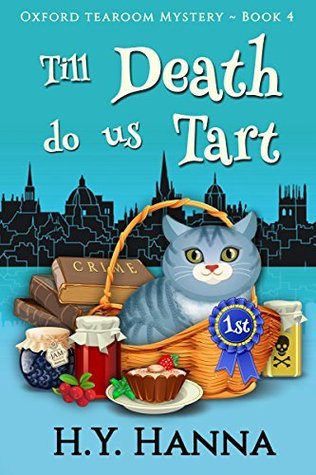 Till Death Do Us Tart (Oxford Tearoom Mysteries #4)
by H.Y. Hanna

Blurb:
When Oxfordshire tearoom owner, Gemma Rose, enters her little tabby, Muesli, in the cat show at the local village fair, the last thing she expects is to stumble across a murder.
And when her meddling mother and the nosy Old Biddies decide to start their own investigation, Gemma has no choice but to join in the sleuthing. She soon finds there’s something much more sinister sandwiched between the home-made Victoria sponge cakes and luscious jam tarts …
But murder isn’t the only thing on Gemma’s mind: there’s the desperate house-hunting that’s going nowhere, the freaky kitchen explosions at her quaint English tearoom and an offer from her handsome detective boyfriend that she can’t refuse!
With things about to reach boiling point, can Gemma solve the mystery before the killer strikes again?
** Traditional Victoria sponge cake recipe at the end of the story!

This series continues to impress me and it’s one of my favorite cozy mystery series. I am always excited when the next book arrives as I know I am in for a great read. Till Death Do Us Tart was another enjoyable book in this series. The author shakes things up again and in this book we start out with a normal death instead of a murder and Gemma, the Old Biddies and Gemma’s mom think there might be more to it and suspect murder. It’s also a poison murder mystery, just like book 2 and for some reason I really like it as it adds something different to the mystery.

This was such an exciting mystery. I totally understood why the police wasn’t calling it a murder yet as there was no real proof and Gemma tries to stay away, but she just can’t let a murderer get away with murder if she can stop it. So she gets involved trying to find out if this was a murder or not. And I actually suspected who was the murderer, I kept going around with a few suspects and when one turned out to be red herring another scene suddenly made me think I knew who the murderer was and I was right. It was fun to actually guess the murderer right for a change. Although I hadn’t ruled out some of the other suspects, this was my main suspect. There are some well done red herrings and we find out more about some of the characters involved in the whole process. This book kept my attention the whole time and I just wanted to keep reading.

There’s a lot of focus on the mystery, but besides that the characters really make this book shine. In this book we see more of characters we already know like Gemma, Gemma her mom, Muesli, Lincoln, Seth, Cassie, Devlin and more. And we meet some new characters as well and it’s a delight seeing all these characters interact. Some fun side characters and possible suspects are introduced in this book like Mary the daughter or the murdered person, a gardener and a crazy cat lady to name a few. And besides that this book also has a fun setting with Oxford and Gemma her tearoom is the small village close to Oxford.

I like Gemma, although she can be a bit too stubborn for her own good, she keeps insisting it is murder even with little evidence to support her claim. But I also admire how she kept working on this as she believed strongly in it and wouldn’t let it go until she was sure. And Muesli has some great scenes again in this book. Gemma her mom teams up with the old Biddies who help try and convince everyone the person has been murdered. It’s a fun cast of characters and I am amazed at how easy it is to remember who everyone is, the author writes the characters in such a way that they all have a distinct personality.

The romance sub plot takes another turn in this book. Gemma has firmly chosen, so there is no more half love triangle, which I liked. And we even see how the other guy is doing and we meet someone who is hopefully a new love interest for him. The romance is really only a side plot and there are very few scenes that actually focus on it, but it’s fun to see things develop in every book. there are some big changes when it comes to the romance in this book. And the epilogue makes me excited for the next book and how this latest development will impact Gemma her life!

To summarize: If you love a good mystery I strongly would recommend this series. I really enjoyed this book and it’s one of my favorite cozy mystery series so far! It had an exciting murder mystery where at first it seems the victim died of natural causes. It’s a poison murder mystery which I really enjoyed. And I actually managed to guess who was the murderer! It was fun to guess it right for a change. This book has a wonderful group of characters, some familiar and some new ones we meet in this book. And ofcourse Muesli, Gemma her cat, makes some fun appearances. There also are some interesting developments on the romance side and the epilogue makes me curious for next book. All in all another great book in this series!

Do you try and guess who’s the murderer when reading a murder mystery?

18 responses to “Review: Till Death Do Us Tart by H.Y. Hanna”