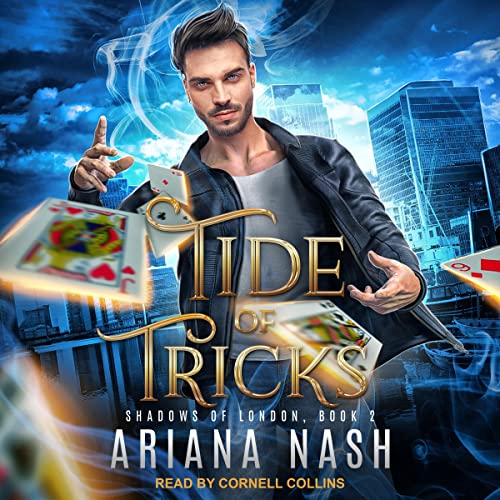 Reeling from recent revelations and forced to lie for Kempthorne, the unthinkable happens: Dom fails the latent competency test. One more strike and he’ll be deemed unstable, have his registration stripped, and the life he’s come to love at Kempthorne & Co will be over.

If that weren’t bad enough, someone is stalking him, taunting him. Someone who knows what Dom did all those years ago.

While Dom juggles Kempthorne’s lies and his own shady past, latents are being murdered. The police won’t help, so it’s up to Dom, Kempthorne & new-recruit Kage (Hollywood) to find the killer, before they strike too close to home.

Dom soon finds himself at the heart of it all with his control slipping, his trick breaking free, and the shadows rising.

He’s coming undone. And for unstable latents, there’s only one way out…

I received a free copy from Tantor Audio and voluntarily reviewed it.

Tide of Tricks is the second book in the Shadows of London book and it’s just as good as the first one, maybe even better. Tide of Tricks has it’s own mystery that gets wrapped up by the end of the book a serial killer who is targeting latents. And at the same time it feels like a continuation of book 1 as a lot of the plot lines set up there progress, like the relationship between Dom and Kage, the relationship between Dom and Kempthorne, the mystery surrounding M and then there is the processing of things that happened at the end of book 1 and the effects spill over in book 2.

I really enjoyed this book. I can never quite predicts what’s going to happen next and there are some great twists and turns. I like how everything makes sense and falls on it’s place and I even managed to guess who the killer was right before the reveal. The pacing is done very well with plenty going on, there isn’t a dull moment and I wanted to keep listening to see what would happen next. And that ending was so well done, I really want to know what happens next!

The case is a tough one and then there is Dom failing his latency test and it’s all piling up. There’s also a lot of Dom’s backstory coming to light in this book. Dom really has a lot to deal with in this book and I felt like I got to understand him even better now in this book. We see how his past has shaped him and why he does what he does. How he wants to save people, but also that piece of ruthlessness he never can quite get rid of. He really is an interesting character to read about and I enjoy following this story.

The romance also progresses. There is a bit of drama between Kage and Dom at the start of the book, but luckily it didn’t drag on too much. And then there is Kempthorne and I liked seeing mroe of him, understanding more of his behavior and the way he interacted with Dom. Now that Dom knows his secret they grow closer. I think I know who Dom is going to end up with, but I am not 100% sure. I think that’s because the author makes you feel the connection with both guys and there’s potential in both relationships.

I am so glad I listened to this one. Cornell Collins does an amazing job with this book and his voice fits the story well. I like all the different voices he uses for characters and it really adds something to this book. The way the characters personality and emotions bleed through in the narration is awesome.

To summarize: This was a great sequel, just as good as the first book. There is a new mystery in this book this time a serial killer is killing latents and Dom and the rest try to find out who is behind this. There are plot lines from book 1 that continue and it all combines into a well paced engaging read with not a dull moment. The plot has some great twists and turns and reveals. As well as a well done ending that makes me wish I has book 3 already. I liked learning more of Dom in this book and the way we learn more about his past and how that shaped him. The relationship with both Kage and Kempthorne progress and I actually like both guys and see potential there for a good romance, but I think I know who he’ll end up with. Cornell Collins’ narration really adds something to this book and I really enjoyed listening to it. I can’t wait for book 3 in audio!

2 responses to “Review: Tide of Tricks by Ariana Nash”